Maria Butina, an alleged Russian spy, pleaded guilty Thursday to conspiring with a Russian government official against the U.S. by attempting to infiltrate conservative political groups, including the National Rifle Association.

Butina, 30, admitted in federal court that she operated in the U.S. “under the direction” of a Russian government official who is widely believed to be Alexander Torshin, the deputy governor of Russia’s central bank.

Butina admitted as part of her plea agreement with prosecutors that she “sought to establish unofficial lines of communication with Americans having power and influence over U.S. politics.”

Beginning in March 2015, Butina and a person believed to be her boyfriend, a GOP operative named Paul Erickson, “agreed and conspired, with a Russian government official (‘Russian Official’) and at least one other person … to act in the United States under the direction of Russian Official without prior notification to the Attorney General.”

The other person referred to the in the plea agreement is not identified by the government.

Together, Butina, Torshin and Erickson established contacts with NRA executives and other conservative political groups. 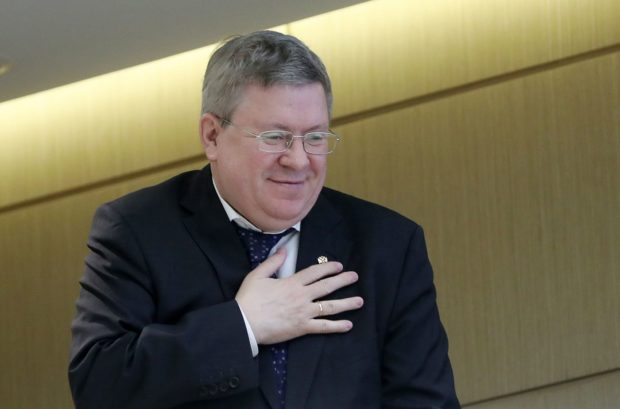 Butina signaled for weeks she was negotiating a plea deal in her case. She was indicted July 17 on a conspiracy charge and on charges of acting as an unregistered foreign agent. Prosecutors in the U.S. attorney’s office in Washington, D.C., pointed to evidence showing Butina reporting back to Torshin about her activities in the U.S. The pair was able to establish contacts with NRA executives, largely through their pro-gun group, The Right to Bear Arms.

Butina and Torshin showed up at numerous NRA functions, and Butina gave talks at gun rights events touting her group, which sought to expand gun ownership rights in Russia.

Butina is also expected to provide information on Erickson. A former board member of the American Conservative Union, Erickson has reportedly been informed that he is a target of the investigation.

Erickson sought to help Butina and Torshin establish contacts with conservative groups, as well as with the Trump campaign. Erickson sent an email in May 2016 inconspicuously entitled “Kremlin Connection” to Trump campaign official Rick Dearborn. Erickson introduced Torshin as an emissary for Russian President Vladimir Putin and sought to arrange a meeting with Trump.

It is unclear how Dearborn responded to the email, but Torshin and Trump reportedly never met. Torshin did briefly greet Donald Trump Jr. later in May 2016 on the sidelines of the NRA convention in Louisville.

Though Erickson sought to establish a meeting for Torshin, Torshin himself suggested months later that Butina should not seek to establish contacts with Trump advisers.

Prosecutors revealed that Butina sought advice from Torshin in November 2016 about “how to create dialogue” with Trump advisers. But Torshin responded that the Russian Ministry of Foreign Affairs, which whom he was in contact, would likely not “go for it.”