Sally Yates, the former deputy attorney general, was upset with the FBI for interviewing Michael Flynn at the White House just days after he took office as national security adviser, according to a document released Friday by the special counsel’s office.

Yates, who was fired by President Donald Trump on Jan. 30, 2017, “was not happy” about the FBI’s decision to interview Flynn, according to Peter Strzok, one of the two FBI agents who met with Flynn on Jan. 24, 2017.

Strzok relayed that detail to the FBI in a July 19, 2017 interview. The special counsel released a summary of that interview on orders from Judge Emmet Sullivan, who is overseeing the Flynn case.

Flynn has pleaded guilty to lying to Strzok and another FBI agent in that interview about his contacts with Russian ambassador Sergey Kislyak in December 2016.

Flynn’s lawyers submitted a court filing on Tuesday in which they questioned the FBI’s tactics in arranging and conducting the interview with Flynn. They suggested that Flynn was pressured to meet with the FBI without White House lawyers present. They also noted that Flynn was not warned of penalties for lying to the FBI. (RELATED: Andrew McCabe Urged Flynn To Meet With FBI Without Lawyers Present) 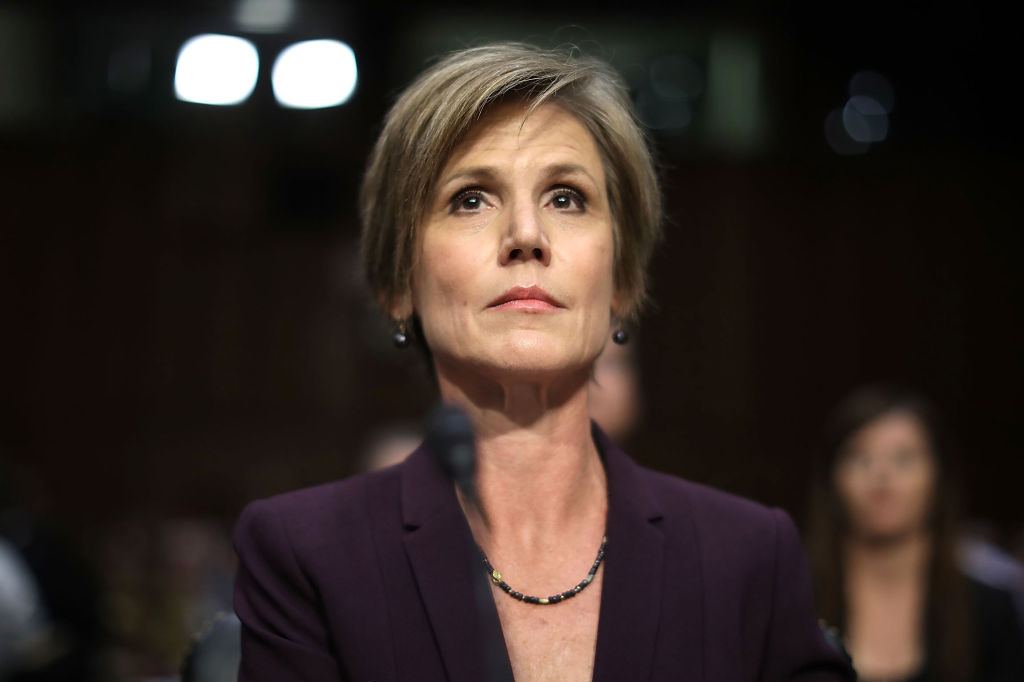 It is unclear why Yates was upset with the FBI for meeting with Flynn. She has since testified to the Senate that she informed the White House general counsel days after Flynn’s interview that she believed he was lying to the FBI.

Flynn was fired as national security adviser on Feb. 13, 2017. The White House claims he was fired for lying to Vice President Mike Pence about the details of his conversations with Kislyak.

According to Strzok, then-FBI Director James Comey “was going to tell Yates right before the interview, but she called him first for another reason before he had a chance to call.”

“When he told her the FBI was interviewing Flynn she was not happy,” reads the summary of the Strzok interview.

Strzok also referred to an argument between unidentified officials “about the FBI’s decision to interview Flynn.”

Passage from Peter Strzok’s July 19, 2017 interview with the FBI

In addition to the Strzok interview, Flynn’s lawyers cited a memo that then-FBI Deputy Director Andrew McCabe wrote following his conversation with Flynn to set up the White House meeting.

Mueller’s team pushed back on Flynn’s complaints about how his interview was arranged.

“Nothing about the way the interview was arranged or conducted caused the defendant to make false statements to the FBI on January 24,” prosecutors asserted.

They said that Flynn “chose to make false statements” about his communications with Kislyak weeks before his FBI encounter.

“He lied about that topic to the media, the incoming Vice President, and other members of the Presidential Transition Team,” Mueller’s team asserts.

The new filings raise numerous questions about the investigation of Flynn, including when and how the FBI determined that he gave false statements about Kislyak.

Strzok told his FBI colleagues that Flynn “did not give any indicators of deception” during the interview. Strzok and the other agent in the interview “had the impression at the time that Flynn was not lying or did not think he was lying.”

According to McCabe’s memo, Flynn knew going into the White House interview that his conversations with Kislyak would be a topic of conversation. Flynn also suspected that McCabe “probably knew what was said” in his calls with Kislyak.

McCabe also noted that Flynn questioned whether information about his phone calls with Kislyak had been leaked.

“I replied that we were quite concerned about what we perceived as significant leaks,” wrote McCabe. His additional thoughts are redacted from the memo.

McCabe was fired from the FBI on March 16, 2018 after the Justice Department’s inspector general determined that he lacked candor in four interviews with FBI and DOJ investigators regarding his authorization of media contacts in October 2016.