Then-president Bill Clinton was impeached by the House following his affair with White House intern Monica Lewinsky 20 years ago Wednesday.

The Republican-majority House of Representatives voted to impeach Clinton on articles of perjury and obstruction of justice on Dec. 19, 1998. But the president would go on to serve two more years in office until his second term ended.

The Senate, also Republican-lead, sensed that the public did not want Clinton to go and let him survive the House’s rebuke, reported The Detroit Free Press.

The House’s decision made Clinton the second president ever impeached. Former President Andrew Johnson was impeached for “high crimes and misdemeanors” in 1868, but continued to serve in office. The affair also made Clinton the first president to give testimony in his own defense before a grand jury.

Clinton’s impeachment stemmed not from his affair with Lewinsky but from his attempt to cover up the relationship. The House voted to impeach him for perjury 228-206 and for obstruction of justice 221-212, according to The Detroit Free Press.

Pro- and anti-Clinton demonstrators gathered at the Capitol the day Clinton was impeached, according to Business Insider. 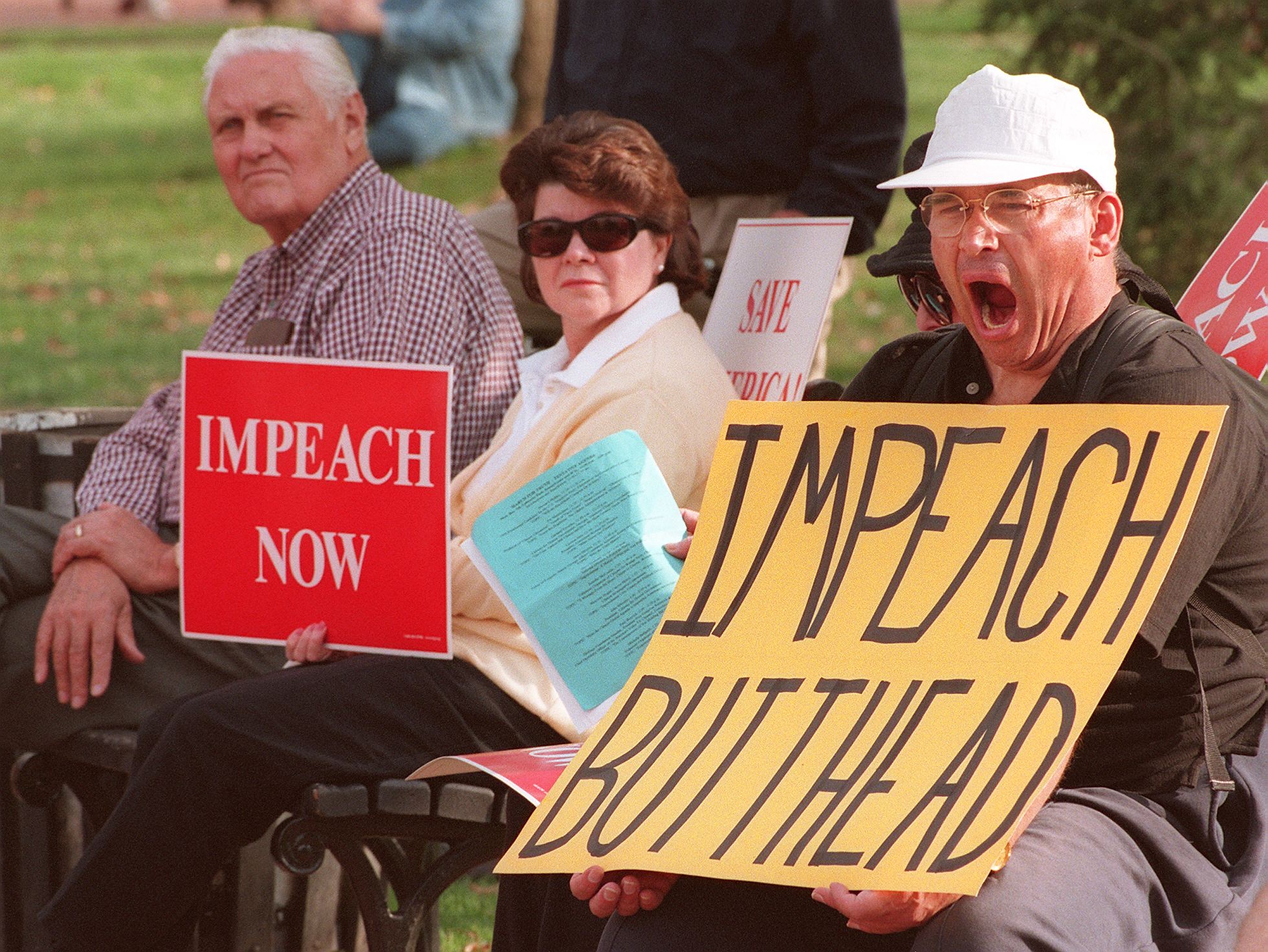 Unidentified protestors demanding the impeachment of US President Bill Clinton conduct their noontime protest from the park benches in Lafayette Park across from the White House 07 December. (Photo credit should read PAUL J. RICHARDS/AFP/Getty Images)

A group of people demonstrate to stop the impeachment process against US President Bill Clinton 16 December in front of the Federal Building in Westwood, outside of Los Angeles, CA. (Photo credit should read HECTOR MATA/AFP/Getty Images)

Lewinsky was on the witness list in that case to provide context for Clinton’s behavior with women, but the judge would later rule her affair immaterial.

The world may never have known about Lewinsky and Clinton’s affair, except that Lewinsky’s friend, Linda Tripp, secretly recorded phone calls with Lewinsky in which she divulged her relationship with the president.

The Washington Post wrote on the day the Senate acquitted Clinton of the two articles of impeachment:

The constitutional crisis ended 13 months to the day after Linda R. Tripp started it by telling independent counsel Kenneth W. Starr’s office that she had secret tapes of her friend, Lewinsky, suggesting that Clinton wanted her to lie under oath in the Paula Jones case about their affair.

Clinton denied having “sexual relations” with Lewinsky and was accused of coaching his secretary Betty Currie into backing up his claims. 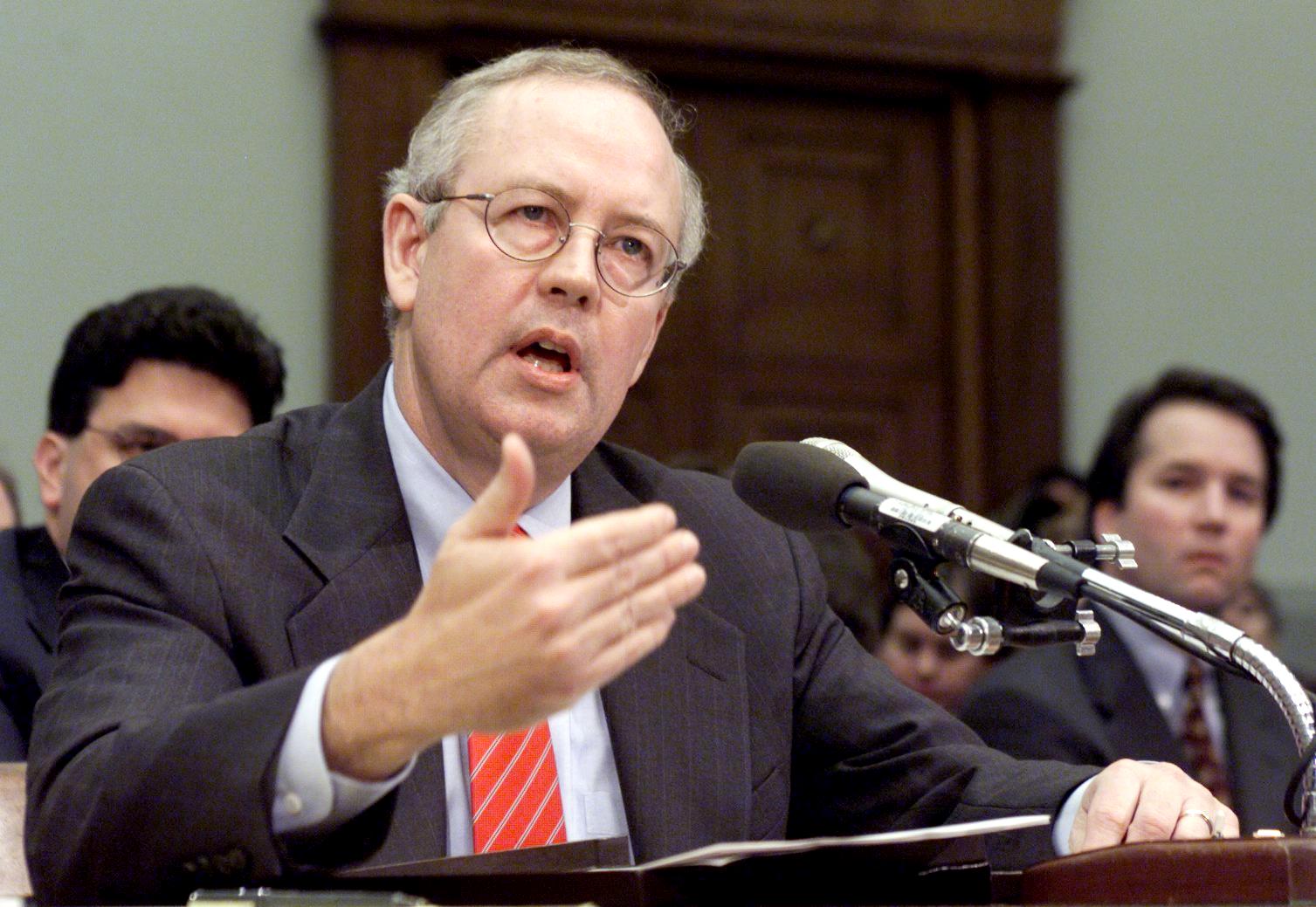 Of the Republican senators who voted to acquit Clinton on both counts in 1999, only Maine’s Susan Collins is still serving in the upper chamber.

Senators from both parties tried to censure Clinton for “shameful, reckless and indefensible” conduct after the acquittal vote, according to WaPo. It failed to garner two-thirds support, so California Democratic Sen. Dianne Feinstein spearheaded gathering signatures on the resolution and filing it as a statement in the Congressional Record.

Clinton delivered a four-sentence statement to the American people after he was acquitted to say he was “profoundly sorry.” He said he wanted the nation “to rededicate ourselves to the work of serving our nation and building our future together,” according to a WaPo article on Feb. 13, 1999.

Misunderstandings of the Clinton impeachment process still abound. “The View” host Sunny Hostin claimed Clinton was impeached for having an affair and was quickly corrected by her co-hosts Dec. 10.

The ordeal seems not to phase Clinton anymore. In fact, he co-wrote a book with popular author James Patterson, which opens with a president in danger of being removed from office.