A lengthy Thursday report in The New York Times highlighted not only the complexity of the Syrian Civil War and what an American withdrawal means for its allies, specifically the Kurds and Israel, but it also, perhaps inadvertently, points out how hard and unforgiving it is to end U.S. military intervention once it’s been dedicated.

The NYTimes dove deep into how the American withdrawal will negatively affect its allies; how they’ll be “forced to reassess their relationships;” and how future U.S. alliances may not be trusted due to Trump’s “abrupt” pullout.

In doing so, the piece solidifies one major issue with U.S. involvement in Syria and one that the NYTimes appears to be pushing: the only way to not let down our Israeli allies or Kurdish battle partners is by staying in the region for the foreseeable future.

This is a concept that the NYTimes Editorial Board itself feared less than one year ago, when it criticized the 2,000 American troops stationed in Syria.

“Now that we know they [U.S. troops] will be there indefinitely, who can say the number won’t go higher and the mission won’t creep more?” the board wrote on Jan. 19. “Syria is a complex problem. But this plan seems poorly conceived, too dependent on military action and fueled by wishful thinking.”

When it comes to the Kurdish forces who have been leading the ground war against the Islamic State, TheNYTimes says they feel “betrayed” by the U.S. pullout, and are threatening to release “thousands of Islamic State prisoners if the United States abandons them.”

The report cites top officials of the Syrian Democratic Forces (SDF), the Kurdish-led and American supported fighters battling ISIS, as its source for the threat, but an SDF spokesman denies those discussions ever took place.

“Any news coming from such sources is not reliable and is not coming from us,” SDF spokesman Mostapha Bali told TheNYTimes.

The supposed threat appears to be an empty one, at least for now, given the devastating affect releasing ISIS prisoners would have on the Kurdish community itself.

The report outlines that a possible option for the Kurds would be to turn to Syrian President Bashar al-Assad and strike a deal: partial autonomy for the Kurds in the northeastern region of Syria in exchange for their loyalty.

“Such an agreement would put Turkey into greater conflict with both Mr. Assad and the Russians,” the report states, citing “analysts.”

In pointing this out, the report appears to show that there was no concrete long-term plan for the Kurds to achieve autonomy, and the U.S.’s presence served as a balancing act that kept the Kurds in limbo. 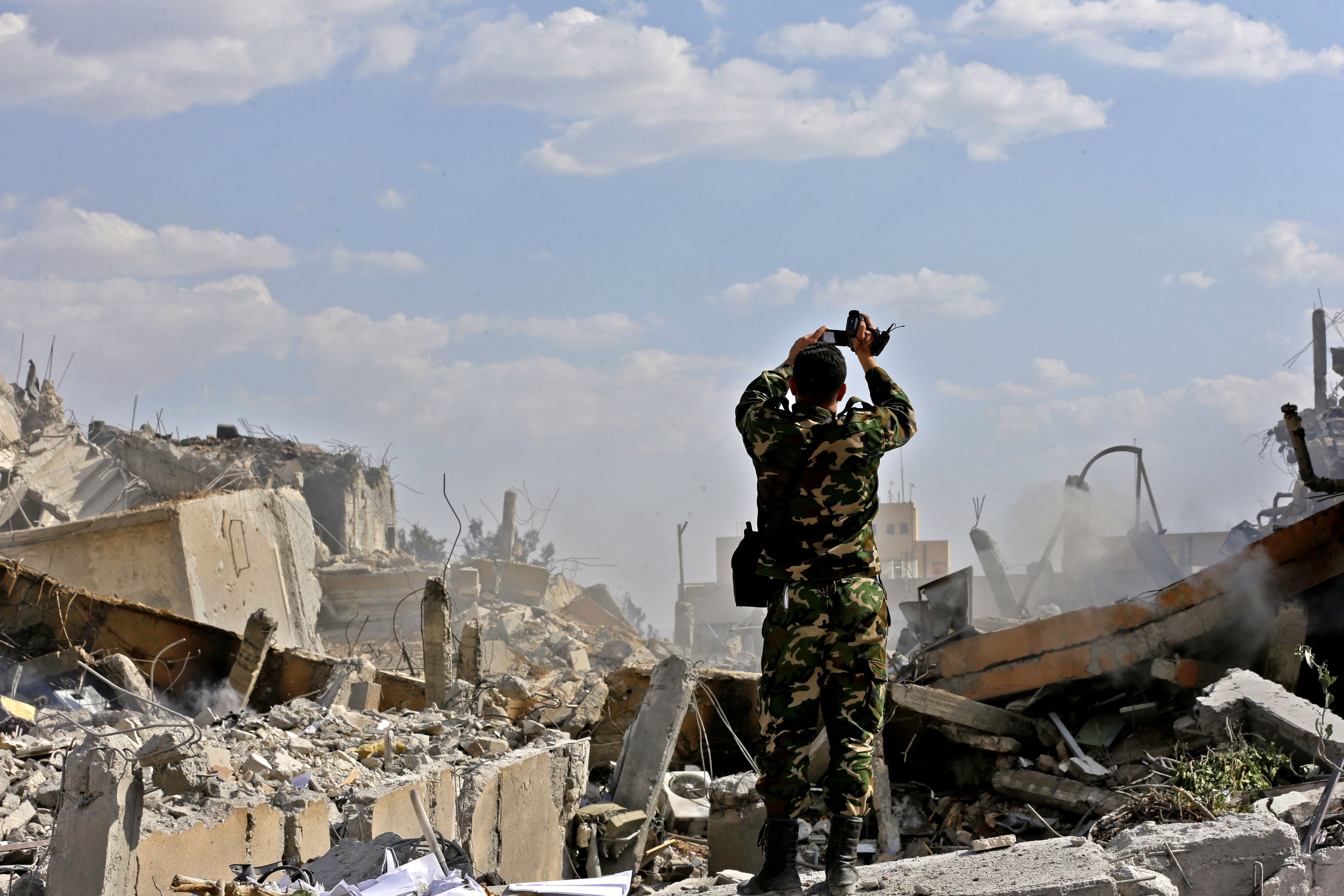 A Syrian soldier inspects the wreckage of a building.  The United States, Britain and France launched strikes against Syrian President Bashar al-Assad’s regime early on April 14 in response to an alleged chemical weapons attack. (Photo by LOUAI BESHARA / AFP)

An American withdrawal also leaves Israel alone to stop Iran’s expanding influence in the region, the report says, and creates a potential rift in the otherwise solid relationship between Trump and Israeli Prime Minister Benjamin Netanyahu.

Trump’s decision is cast as an “embarrassment” for Netanyahu as he heads into an election year and a blow to “Israeli morale,” the report continues, although Netanyahu himself issued a statement with a slightly different tone, saying “this is a U.S. decision,” and Israel will continue to defend themselves in the region.

Whether purposefully or not, TheNYTimes seems to argue that a U.S. pullout has more of a psychological impact on Israel, rather than presenting a strategic danger.

“It’s all of 2,000 soldiers,” Eyal Zisser, an expert on Syria and Lebanon at Tel Aviv University, told TheNYTimes. “Psychologically, though, they were there, which to a degree put the others – the Russians, the Iranians – on notice.” (RELATED: While The Media Wonders If Trump Is Putin’s Puppet, The Pentagon And Ukraine Conduct War Games)

This quote brings up an important point that appears lost in the chaos of coverage. The bulk of direct U.S. military involvement in Syria circles around airstrikes and training and advising the Kurdish forces, not necessarily boots on the ground defense.

The bipartisan outrage of Trump’s decision highlights how difficult it is to pull American support abroad once it’s been dedicated and can help explain why former President Barack Obama’s decision to pull troops from Iraq in 2011 was met with a similar response and criticism.

“Withdrawal of this small American force in Syria would be a huge Obama-like mistake,” one of Trump’s usual allies, Republican Sen. Lindsey Graham of South Carolina, said on Twitter.

Trump’s decision to withdraw American forces from Syria, while executed differently, mirrors his predecessor’s desire to remove U.S. forces from wars and conflicts that have no foreseeable conclusion and in which the U.S. is seemingly responsible for resolving.