The president agreed to the withdrawal during a December 14 phone call with Turkish President Recep Tayyip Erdogan, two officials told NBC News, but the original purpose of the call had been “for Trump to tell Erdogan to back off” threats to attack American supported Kurdish rebels, NBC reported.

But Trump went off-script during the call and agreed with Erdogan, particularly when the Turkish president asked Trump, “Why are you still there?” when the Islamic State had been 99 percent defeated. Erdogan reportedly told Trump that his country could handle what was left.

With Erdogan on the line, Trump asked national security adviser John Bolton, who was listening in, why American troops remained in Syria if what the Turkish president was saying was true, according to the officials. Erdogan’s point, Bolton was forced to admit, had been backed up by Mattis, Pompeo, U.S. special envoy for Syria Jim Jeffrey and special envoy for the anti-ISIS coalition Brett McGurk, who have said that IS retains only 1 percent of its territory, the officials said.

The national security team spent the following weekend unsuccessfully trying to alter Trump’s decision, to no avail, and the news hit the press on Wednesday. 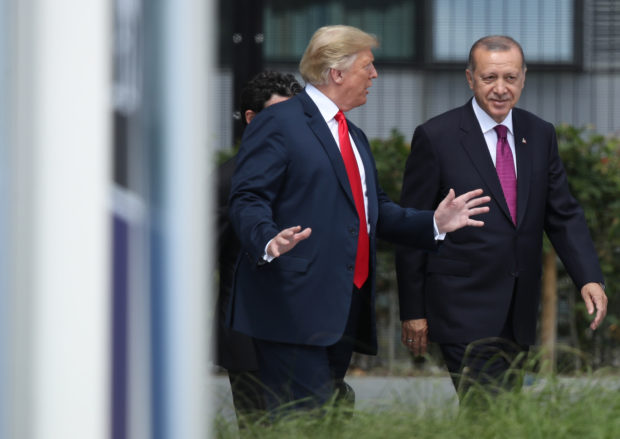 The president’s decision to withdraw U.S. forces from Syria and Afghanistan has been roundly criticized by neoconservative politicians, military brass, and even Democrats normally opposed to war but eager to find a point with which to hammer the president. However, it does represent Trump’s desire to keep a key campaign promise, and has not been without its defenders, including Kentucky Senator Rand Paul. (RELATED: Kurds Expected America To Stay In Syria ‘Forever’ But Trump Had Other Plans)

“This president got elected to get our foreign policy back on the right track after years of being adrift,” Miller said. “One foreign policy blunder after another in Iraq and Afghanistan and Libya hasn’t worked out for our national interest.”