LOUNGING ON A GRAY SOFA — “Merry Christmas Eve EVE!” exclaims host Brian Stelter in a burst of unfunniness at the top of the show.

“It’s so embarrassing for the country,” he opines of the government shutdown.

Stelter refers to President Trump’s presidency as “the TV presidency.”

What’s that big pause — is he waiting for the prompter to go up again?

He keeps doing these pregnant pauses. Naturally this is irritating.

Who is that on the far right? 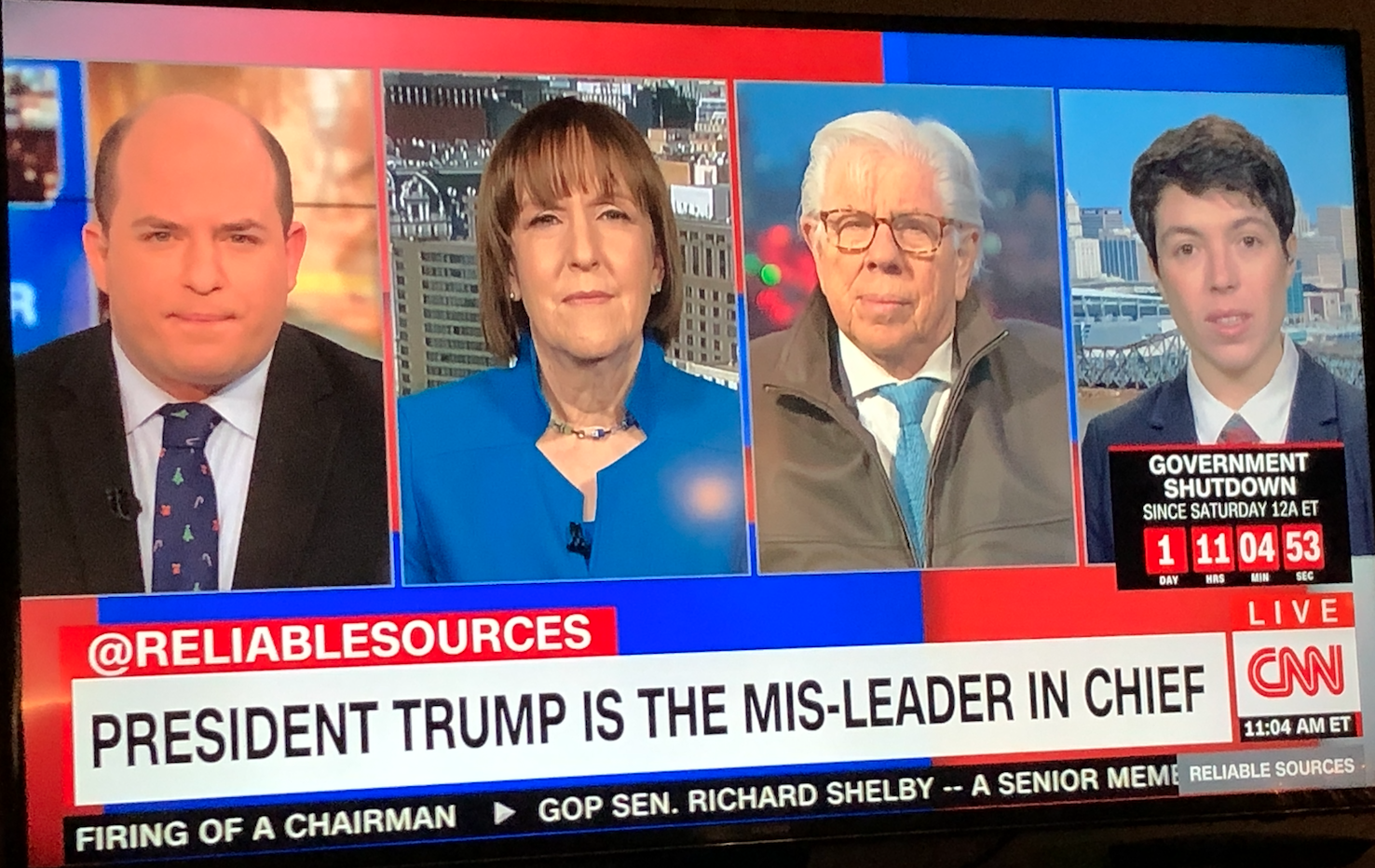 It’s Vox’s Senior reporter Dara Lind. The Yale grad is wearing a suit jacket, a plaid necktie and pretty coral lip gloss. CNN is patching her in from Cincinnati.

CNN Political Analyst Carl Bernstein is being blown in from Paris. His hair is swaying in a gentle Parisian breeze. His head could fit in the Arc de Triomph if he leaned a little more to the left.

“The border wall has become a debate about giving Trump what he wants,” Dara says.

“It’s all one big story and that story is about the fitness or unfitness of Donald Trump to be president of the United States,” says Bernstein, who has a froggy voice and is dressed in some kind of gray trench coat. He is never concise. “He is unfit on psychological grounds…and particularly unfit in his conduct of foreign policy as to be a danger himself.”

He is still talking. I’m having trouble concentrating. I rewind about six times to listen to all his blather.

“As journalists we need to be talking to all Republican members of the House and Senate,” Bernstein drones. “Let’s start running detailed stories on what they think.”

Here’s an existential question to ponder on this Christmas Eve EVE: What would life be like if Carl Bernstein could make his points with fewer words?

Stelter calls Trump a mis-leader in chief. (Get it?)

“If Hillary Clinton or Barack Obama had done the things that Donald Trump has done, impeachment proceedings would have started awhile ago,” says Bernstein, once again on a verbal tear. “He’s off the rails — Republicans saying that, not the Democrats. He’s not stable enough to be president.”

From his cushy Paris perch, Bernstein suggests that journalists go out into the country and interview the people.

Stelter is all up in arms that Trump is not holding an end of year press conference like former President Obama did when he was leader of the free world.

BuzzFeed’s EIC Ben Smith is here to take a victory lap for the site winning a lawsuit this week. But first, Smith needs to take some jabs at Trump. “The job has been to sort of, like, minimize the energy on Trump’s attempts to constantly produce theater and report about what is actually happening,” Smith  says.

WaPo’s Sarah Ellison looks like she has snakes running across her torso. She’s in some sort of black getup with distracting beige tubes. She says Trump’s show is really entertaining. “It sort of flattens the importance of every news event,” she says. “…If you do something dry, no one is going to really pay attention.”

Douglas Brinkley, a presidential historian, talks about Coulter’s incredible power over Trump. “She challenges his manhood and other words I won’t say and he folds,” he says.

Stelter says he counted it up and Trump tweeted about “fake news” 200 times this year.

“Are we getting numb to this?” the host asks, clearly pushing his guests, all of whom agree with him on everything,  to say ‘yes.’

Brinkley says Trump’s “fake news” accusations are becoming part of the lexicon. He says part of the problem is that “Trump lies” — over 7,000 times this year.

Now it’s time for the buzzy news that came out days ago. BuzzFeed won a defamation lawsuit over publishing the infamous dossier. Smith says it seems “insane” in retrospect that the American people wouldn’t get to see the dossier.

There’s mention of the German Der Spiegel reporter who made shit up. Stelter says the guy was given a CNN award many years ago. But thank goodness, he says, CNN never published the reporter.

“We complain about social media these days, it’s also an incredible way to call BS,” Smith says, dotting his quotes with the word “like,” making him sound like a valley girl.

Coming up is my least favorite “Reliable Sources” regular, Baltimore Sun shouter David Zurawik, who Stelter says is all “fired up” about the ad boycott against Fox News’s Tucker Carlson.

Balding count for this show is pretty low: two balding men, three men with hair, and three women with hair.

“I don’t have sympathy for him because he’s positioned himself this way,” Zurawik adds.

Stelter says Trump was so angry over the media’s coverage of Mad Dog’s firing that he sped up the new acting Sec. of Defense Patrick Shanahan’s start date to Jan. 1. There’s no sourcing for this — he just states it outright.

Shanahan was previously the deputy Sec. of Defense.

Uncharacteristically, Stelter makes no snide comments about Trump’s sudden move or his casting blame on the media for his December surprise.