The government shutdown is leaving the United States’ national parks unsupervised and looking a lot like the old West, according to some volunteers who are devoting their extra time to cleaning up the monuments.

Conditions are deteriorating at Yellowstone and Joshua Tree National Park, The Washington Post reported Wednesday, citing volunteers who are working to establish some order. Americans are enjoying free access, but it comes with a price: they must contend with cluttered trashcans and closed restrooms.

“Once those port-a-potties fill up, there’s no amount of cleaning that will save them,” Sabra Purdy, owner of the rock-climbing guide service Cliffhanger Guides in Joshua Tree, told reporters. “At that point, I think I’m going to have to tap out.”

She is volunteering to maintain the park while lawmakers and President Donald Trump haggle over funding for a wall.

“People are doing it because we love this place and we know how trashed it’ll get if we don’t,” Purdy said.

Other volunteers are sharing similar sentiments.

“It’s not quite ‘Lord of the Flies’ yet,” Bryan Min, who traveled to Joshua Tree with friends from Orange County and is camping outside the park. “Who knows how it’ll be tonight?”

The parks are not completely shuttered thanks to contingency plans the National Park Service adopted in 2017. As a result, the closed parks are open but without staffing, WaPo reported.

Yellowstone National Park is also feeling the sting, some volunteers claim. The National Park Service’s shutdown plan does not consider snow removal from the park’s roads an essential part of upkeep. Private concessionaires and volunteers, therefore, have had to pool their resources to pay for removal. 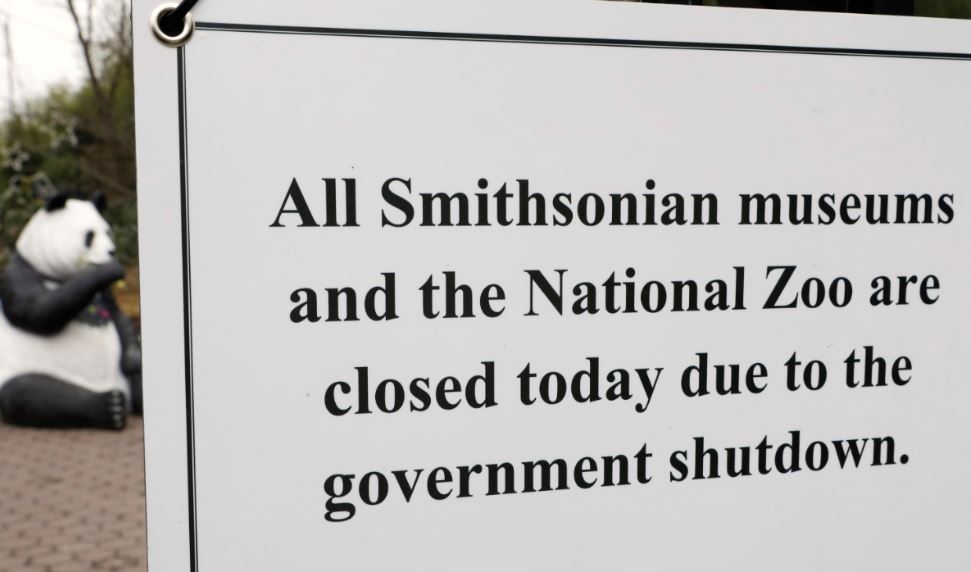 The figure of a panda is seen behind a sign telling the public that the National Zoo is closed due to the partial government shutdown in Washington, U.S., January 2, 2019. REUTERS/Kevin Lamarque

“If we don’t do this, we’re closed. That’s really not much of an option. Having said that, we’re doing this certainly in hope and anticipation that the shutdown does not go on indefinitely,” said Rick Hoeninghausen, director of sales and marketing for Xanterra Travel Collection, a concessionaire in Yellowstone.

The government shutdown has dragged on for 12 days; there doesn’t seem to be an end in sight. (RELATED: House Dems Release Plan To End Shutdown — No Wall Included)

House Minority Leader Nancy Pelosi and her Democratic colleagues reportedly put together legislation allocating $1.3 billion to border security — none of the funding will go to a wall. Senate Republicans are unlikely to support any measure that Trump does not support.

Democrats take ownership of the House on Thursday. Democratic and Republican lawmakers will gather at the White House Wednesday afternoon for a briefing on border security as the partial shutdown continues. Trump ratcheted up the stakes in a Dec. 27 tweet, telling his followers that he would be willing to close the border if he does not getting funding for the wall.