Christopher Steele told a top Justice Department official about an effort undertaken on behalf of a Russian oligarch to investigate the business dealings of Trump campaign chairman Paul Manafort, a revelation that raises new questions about the dossier author’s contacts with the Russian, Oleg Deripaska.

During a meeting on July 30, 2016, Steele told Bruce Ohr, who at the time was the top career official at DOJ, that an attorney for Deripaska had gathered information about Manafort’s business dealings.

Portions of Ohr’s Aug. 28 congressional testimony were published Monday by The Epoch Times. 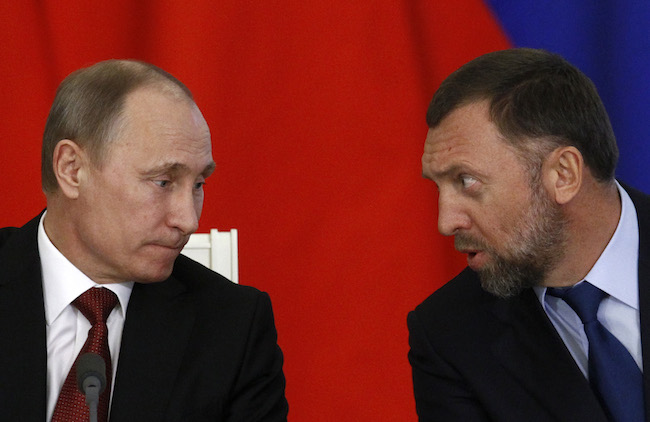 Steele, a former MI6 officer, investigated Donald Trump’s possible ties to Russia as part of a project funded by the Clinton campaign and the Democratic National Committee. The result was a 35-page dossier alleging a vast conspiracy of collusion between the campaign and Kremlin to influence the election through the release of hacked emails.

Manafort is mentioned in a couple of Steele’s memos, most prominently in one written on Aug. 22, 2016. The memo alleged that Manafort had received kickback payments from former Ukrainian Prime Minister Viktor Yanukovych. The memo cites a “well-placed Russian figure” who relayed information about an Aug. 15, 2016, meeting between Putin and Yanukovych where the latter discussed the payments to Manafort.

Deripaska and Manafort have battled for years over a $19 million business deal to purchase cable TV assets in Ukraine. Deripaska sued Manafort in 2014 over the deal, alleging fraud.

Manafort appeared eager to resolve the dispute after joining the Trump team in April 2016. He sent an email to an associate on July 7, 2016, offering to provide “private briefings” about the campaign to Deripaska. The oligarch’s camp has claimed that he never received the briefings.

Deripaska is not mentioned in the dossier, and there is no evidence so far suggesting that he was a witting or unwitting source for Steele. He has previously denied having any involvement in the dossier.

Deripaska told The Hill for an Aug. 7 article that it was “utterly false” that he “had some unspecified involvement in the so-called dossier.”

A link between Deripaska and Steele was first broached publicly in a Feb. 13, 2018 Senate Intelligence Committee hearing.

“That’s not something I can answer,” Wray replied, adding that “there might be more” that he could say in a classified hearing.

The Hill has since reported that Steele worked for Deripaska as early as 2012. The extent of their relationship is still unclear.

Ohr and his wife, Nellie Ohr, met with Steele on July 30, 2016, at a hotel in Washington, D.C. Nellie Ohr at that time was working for Fusion GPS, the opposition research firm that was hired by the Clinton campaign and DNC to investigate Trump.

Days after the meeting, Ohr met with then-FBI Deputy Director Andrew McCabe to brief him on Steele’s information. Lisa Page, a lawyer working under McCabe, was also in the meeting.

Hauser, the lawyer for Deripaska, did not respond to a request for comment. A spokesman for Manafort declined comment.

Ohr shed light on other dossier-related matters during his congressional interview.

Millian, a Belrus-born businessman, was reported to be “Source D” and “Source E” in the dossier shortly after it was published on Jan. 10, 2017. That source made the salacious and unverified allegation that the Kremlin has blackmail material on Trump in the form of a video tape of Trump with Russian prostitutes.

Millian has claimed in various interviews to have links to Trump’s real estate company. He also claimed in an ABC News interview on July 29, 2016, that he had close ties to Russian government officials. (RELATED: In Newly Released Interview, Alleged Dossier Source Made Cryptic Remarks About Trump)

According to “Russian Roulette,” a book that focuses heavily on the Steele dossier, the ABC interview was arranged after Glenn Simpson, the founder of Fusion GPS, reportedly tipped off ABC News reporter Brian Ross about Millian.

Simpson has also reportedly doubted Millian’s reliability as a source. According to “Russian Roulette,” Simpson believed that Millian was a “big talker.”

Ohr mentioned Millian when asked whether Fusion GPS attempted to verify allegations in the dossier.

“I think—I don’t know the specifics. The fact that my wife was looking at some of the same figures, like Sergei Millian, suggests that that was one way they were trying to vet the information,” Ohr said.

Ohr said that Steele or Simpson had shared Millian’s name with him during one of their meetings.

Ohr also said that either Steele or Simpson told him that someone associated with the Trump campaign knew about hacks of the Clinton campaign before they were made public.

“I don’t remember if it was Glenn Simpson or Chris Steele that mentioned this—talked about—I’m going to get the names wrong, but somebody associated with the Trump campaign having advance knowledge of when information about the Clinton campaign that had been stolen and hacked, when it was going to be leaked,” Ohr said.

The Epoch Times report does not say whether Ohr provided names of Trump associates alleged to have advance knowledge of hacked emails. But the question is at the center of Special Counsel Robert Mueller’s probe of Trump-Russia collusion.

One former Trump campaign aide, George Papadopoulos, was told during the campaign that Russia had possession of stolen Clinton-related emails.

Papadopoulos told the FBI in a Jan. 27, 2017, interview that a Maltese professor named Joseph Mifsud told him in April 2016 that Russia had “thousands” of emails that had been hacked from Clinton.

The former Trump aide was questioned about his contacts with Millian during his FBI interview, according to documents released by the special counsel’s office. Papadopoulos pleaded guilty on Oct. 5, 2017 to lying to the FBI during that interview about the extent of his contacts with Mifsud. He served a 14-day prison sentence.