Catholic high school boys in MAGA hats became the villains in a weekend viral video storm that left out context and facts to drive a narrative — and media outlets were quick to promote the story without digging further.

But as multiple sources began to provide context — background information and additional videos — the original story began to take on an entirely different shape. The boys, who certainly might have handled the situation better, were surrounded by adults who also might have done the same, and the media chose to report only one side of that story. (RELATED: Apologies Roll In For Catholic School Protesters As Fuller Picture Of Events Emerges)

It’s even worse when you see the full mob effect. pic.twitter.com/Oe7Zn5srOB

In this video, Phillips is shown near the center of the crowd. The boys are jumping up and down around him and can be heard chanting “Cov Cath is the best” in time with the drumbeat. Phillips keeps a straight face as he and several others continue drumming and singing. As the clip ends several of the boys can be heard laughing and saying that they don’t know what is going on: “I don’t know, man. I don’t really know. This is neat.”

I dgaf if they are minors. They need to be identified. What school are they from? Who was chaperoning them? This is one of the most horrific displays of ignorance, racism & disrespect. My god. I feel sick. pic.twitter.com/oUsiVY5pNA

This video also shows Phillips and several others in the center of the crowd while the boys around them clap and chant. One of the boys can be heard yelling, “What is going on? This is so sweet!”

I found the young lady who took video. This was written by her friend. She’s turned her IG comments off She’s strong but tired 2. She wants us 2 spread awareness but not words/threats of violence. She wants the kids 2 apologize. She’s wise & kind. It’s 3am. I’ll b back later pic.twitter.com/pu4egRCW6w

Although the posted videos did not include any of these things, it was reported that the person who took the video had heard the boys chanting “build the wall and other Trumpisms” and claimed that the boys were just looking for “ANY opportunity to get violent.”

There are dozens of students laughing and egging on the behavior. Will be interesting to see if anyone is actually expelled, as officials suggest is possible https://t.co/l7kjDOxiS7

Must Watch: Native-American elder taunted by racist MAGA-hat wearing teens, speaks and cries for America, the country he defended and sacrificed and wore the uniform for. It is people like Nathan Phillips who make America great.
Thank you for your dignity, sir. https://t.co/Kae7lgAFrk

While white teenagers in MAGA hats relentlessly mocked him, Nathan Phillips thought about his wife, Soshana — who died of cancer four years ago.

“I felt like the spirit was talking through me,” he told ⁦@washingtonpost⁩. https://t.co/1uDuSN1J7N

The contrast between the calm dignity and quiet strength of Mr. Phillips and the behavior of #MAGA brats who have absorbed the spirit of Trumpism–this spectacle is a lesson which all Americans can learn. https://t.co/EbXMa6Bbel

Newsweek, after speaking to the mother of one of the boys who attended, mentioned the Black Israelites’ possible involvement in the confrontation in an article headlined “‘Black Muslims’ Made My Son Do It, Says Mother Of Pro-Trump Boy Who Mocked Native American Veteran.”

In that article, the woman was quoted as saying, “Shame on you! Were you there? Did you hear the names the people where (sic) calling these boys? It was shameful. Did you witness the black Muslims yelling profanities and video taping trying to get something to futher [sic] your narrative of hatred??” (RELATED: CNN Tattles On Troops For Holding MAGA Hats During Trump Visit)

Thank you to @VinceSchilling of @IndianCountry and many others who identified the proud Native man who is being harassed. He is Mr. Nathan Phillips. I’m reposting this video from “ka_ya11” on IG. This man’s words pierce my heart. The grace. The wisdom. The hope. pic.twitter.com/BKOA40SVq5

The Native American Elder was quickly identified as Nathan Phillips, a Vietnam veteran and activist who has appeared at a number of protests — including, most recently, the protests at Standing Rock, North Dakota, protesting the Dakota Access Pipeline.

Phillips spoke to The Washington Post following the confrontation with the students:

“It was getting ugly, and I was thinking: ‘I’ve got to find myself an exit out of this situation and finish my song at the Lincoln Memorial,'” Phillips recalled. “I started going that way, and that guy in the hat stood in my way and we were at an impasse. He just blocked my way and wouldn’t allow me to retreat.”

The boys were identified as students from Covington Catholic High School in Kentucky — but some wanted more information.

Ps. The reply from the school was pathetic and impotent. Name these kids. I want NAMES. Shame them. If you think these fuckers wouldn’t dox you in a heartbeat, think again. https://t.co/IS80wiaQ7v

Others posted the school’s physical address and phone numbers of administrators (we have opted not to link those here).

In 2015, Phillips was involved in an altercation with several Eastern Michigan University students dressed as Native Americans. He said that he was just going to walk by when they called him over.

“They had their face painted,” Phillips said. “I said what the heck is going on here. ‘Oh we are honoring you.’ I said no you are not honoring me.”

It was a statement he says they took offense to.

“Then started whooping and hollering,” he said. “I said that wasn’t honoring, that was racist. Then at that time, it really got ugly.”

Following the spread of the video, celebrities and pundits alike picked up the narrative — and began comparing the boys in the video to the KKK and even to those who crucified Jesus.

The red MAGA hat is the new white hood.

Without white boys being able to empathize with other people, humanity will continue to destroy itself. #FirstThoughtsWhenIWakeUp

And they blamed President Donald Trump:

An entire generation of young white boys and men are being radicalized by Trump in front of our very eyes.

Impeachment or no impeachment, defeat in 2020 or no defeat in 2020, I suspect it’s too late to put this particular #MAGA genie back in the bigoted bottle.

And they advocated violence.

They like to say & believe that violence isn’t the answer….but for this little smug, entitled, privileged, MY DADDY WILL SUE YOU fuck boy in the MAGA hat…..I don’t see another option. Crack his shit one good time, bet he won’t be bout this life no more. pic.twitter.com/gBhzwKGLU8

Response from Cov Cath student who says he was present at the event in question in Washington.@Local12 pic.twitter.com/nqLD1pJY2u

One anonymous student provided Local 12 reporter Adam Clements with a written statement regarding the confrontation. He said that the boys were waiting for their bus and had decided to do some school cheers to pass the time.

We initially thought this was a cultural display since he was beating along to our cheers so we clapped to the beat. He came to stand in fron of one of my classmates who stood where he was, smiling and enjoying the experience.

… we did not partake in any physical or verbal abuse, did not chant “build the wall” or mock or anything of the like, and did not seek to incite violence. After that initial occurrence, we were then verbally assaulted by four or five African-American men who called us “faggots” and berated one of our African American friends for being friends with us.

A full video, which begins nearly an hour prior to the confrontation between Phillips and the boys, was shared on Facebook by Shar Yaqataz Banyamyan, and a mirror of that video was posted to YouTube. (RELATED: YouTube Takes Down Video Showing Planned Parenthood Helping Sex Trafficker)

That video begins with coverage of about five African-American men identified as “Black Hebrew Israelites” — with which the person recording the video appeared to be involved — interacting first with the Native American protesters, calling them just “like the white man” and calling one female protester a “culture vulture” and a “damn blue-eyed demon” (10:20). 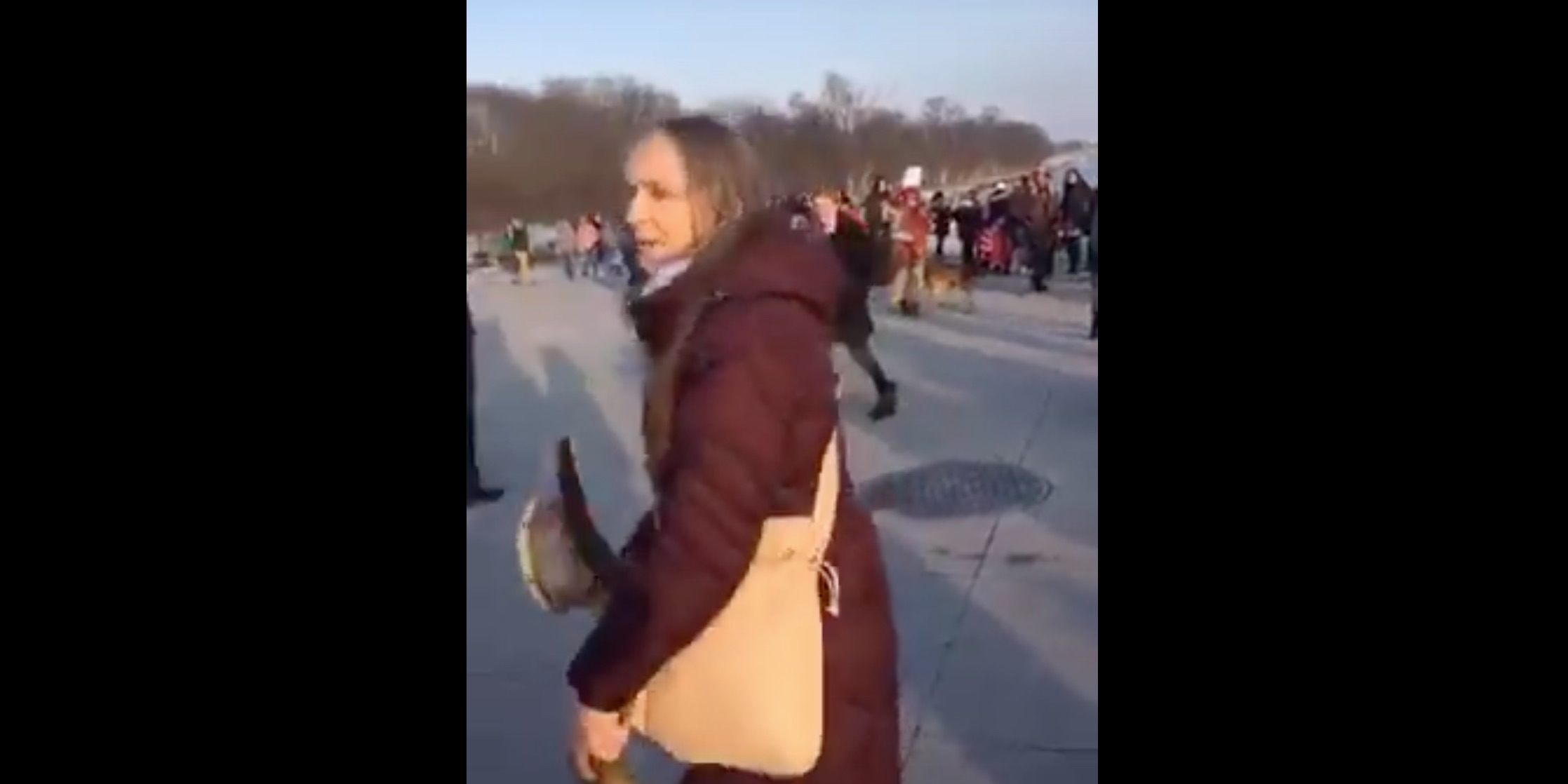 After an hour or so of the Black Israelites yelling at the Native American group — calling them “$5 Indians” and “rented Natives” — they turned their attention on the gathered group of young boys.

They called the group “dusty-ass crackers” and claimed that their MAGA gear was racist.

The boys began chanting school spirit slogans, but the Black Israelites continued to taunt them, saying, “You sound like a bunch of dogs. Hyenas.” They also claimed that the boys wouldn’t dare come any closer because “you can’t see the angels around us. You worship blasphemy and we got angels” (1:09:00).

At that point, one of the boys ran down the steps, stripped down to a pair of athletic shorts, and led the group in a raucous cheer (1:09:45). 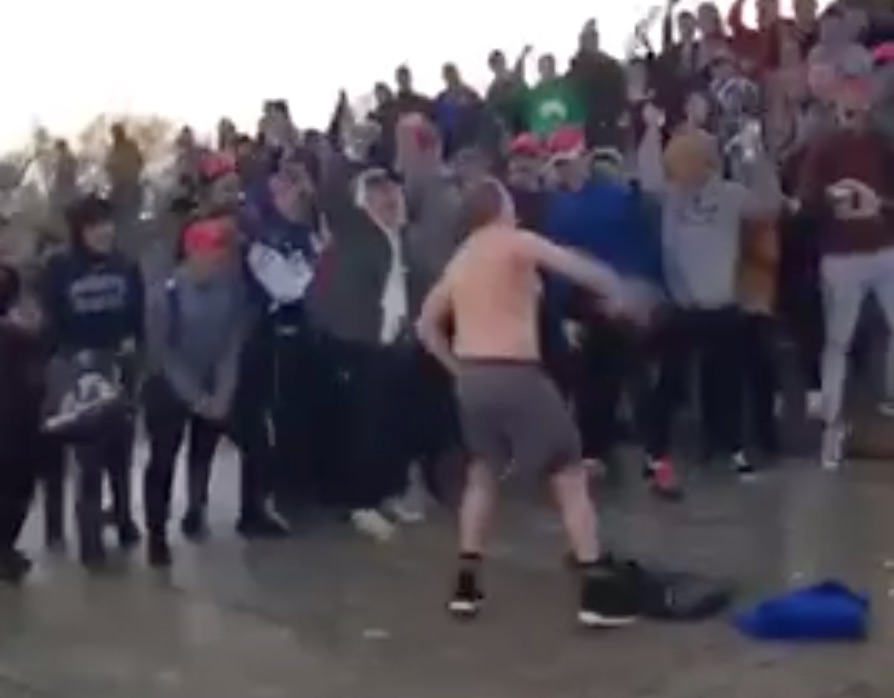 The boys continued to cheer and chant, and only then did Phillips and the others in his group approach. “Here come Gad,” the Black Israelites commented as he got closer (1:12:22).

The video then shows Phillips walking right into the crowd, pushing into the group and stopping only when he was nose to nose with one of the students. From behind him, one of the Black Israelites yelled, “Y’all better not touch him. Y’all better not touch him,” and claimed that “Gad” had “calmed the demonic spirits” as the boys continued to chant along with the beating drums (1:13:25).

“Serious mockery,” the Black Israelites continued. “With their Make America Great Again hats. America will be destroyed by nuclear thermal destruction. Thus saith the Lord.” They added,  “This is what Donald Trump produces. This is a bunch of future school shooters. That’s right. School shooters. That’s your future” (1:14:28).

Shortly after Phillips left the scene, the Black Israelites once again turned their attacks on the students. Upon realizing that there were a couple of African American students in the group, they yelled, “They got one black man. Y’all got one n***er in the crowd, huh? One n***er, huh? OHHHH, you got two n***ers in the crowd. Two n***ers in the crowd.” The Covington boys quickly surrounded the black students, helping them disappear into the crowd (1:18:25).

They went on to tell the boys that “your president” and his attorney Rudy Giuliani were “homosexuals,” citing a charity dinner in 2000 where Giuliani dressed in drag and Trump pretended to harass him in a comedy skit (1:22:30).

The boys fired back simply by pointing out, “Most of us aren’t even old enough to vote.”