The social media platform suspended the account with the username @2020fight for suspicious activity after CNN Business alerted Twitter that, while the account bio said it belonged to a California school teacher named Talia, the profile’s picture was that of a blogger from Brazil. Analytics revealed that @2020fight’s post of and caption for a minute long video of the confrontation between the Covington students and Phillips became the main version of the video shared on social media, shaping a narrative that accused the students of bigotry. (RELATED: Catholic Leaders Publicly Condemned School Boys At March For Life, But Remain Silent After Videos Proved Their Innocence)

“This MAGA loser gleefully bothering a Native American protester at the Indigenous Peoples March,” @2020fight’s caption for the video read. 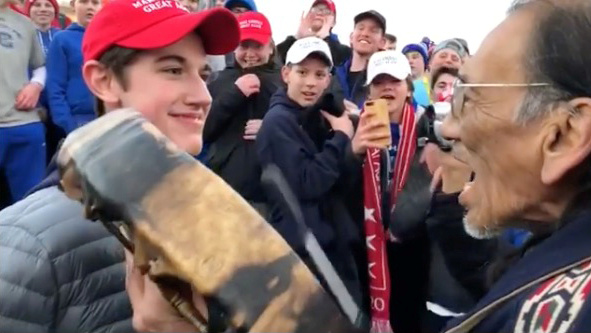 Rob McDonagh, assistant editor of an online content vetting service called Storyful, noted several suspicious characteristics about @2020fight, including its “high follower count, highly polarized and yet inconsistent political messaging, the unusually high rate of tweets, and the use of someone else’s image in the profile photo.”

More suspicious still was the fact that, according to information warfare researcher Molly McKew, a network of anonymous accounts was amplifying @2020fight’s post of the video across social media.

The account’s video did not show what preceded the encounter between Phillips and the students, and therefore did not reveal that a black supremacist group called the Black Hebrew Israelites initially accosted the students with profanity and racial slurs before Phillips and his colleagues also approached and confronted the high school students, who tried to drown out the two other groups’ insults with school cheers.

Nevertheless, Twitter users retweeted @2020fight’s truncated video and its caption at least 14,400 times and viewed the video at least 2.5 million times. So influential was @2020fight’s post that members of the media reached out directly to the owner of the profile in the course of reporting on the incident. McDonagh said that @2020fight’s post was the primary version of events shared on social media.

The post was so successful in helping to shape the narrative that scores of journalists, public officials, priests, bishops, nuns, dioceses, and even the students’ own school publicly denounced the children without reaching out to them for their version of events or waiting for further information about the incident.

“This is the new landscape: where bad actors monitor us and appropriate content that fits their needs. They know how to get it where they need to go so it amplifies naturally. And at this point, we are all conditioned to react and engage or deny in specific ways. And we all did,” McKew said.