A small group of Black Hebrew Israelites harassed and verbally assaulted a larger group of Catholic students at the March for Life in Washington, D.C. last Friday, slinging racial epithets at both the students and a nearby group of Native Americans for nearly two hours.

The media’s coverage of the Black Hebrew Israelites group, however, has all but ignored its role in the confrontation that occurred over the weekend.

The New York Times published a piece Wednesday describing the group and its involvement in what was initially reported as a dust-up between just two groups — the Covington Catholic High School boys and a small group of Native American protesters — and offered a slightly rosier picture of the Black Hebrew Israelites.

The NYT article began with a simple description of the group:

They are sidewalk ministers who use confrontation as their gospel.

Hebrew Israelites practice a theology that says God’s chosen ones — black, Hispanic and Native American people — have strayed and need to be led back to righteousness.

The piece went on to offer a description of what occurred over the weekend:

The attention-grabbing tactics of five of their followers at the Lincoln Memorial on Friday resulted in spectacular consequences. The fringe theology landed in the national spotlight after a viral video surfaced of a group of black Hebrew Israelites profanely clashing with dozens of mostly white Catholic schoolboys wearing “Make America Great Again” caps. That video emerged only after shorter clips posted online showing a confrontation between the students and a Native American elder initially led to heavy criticism of the students.

For the Hebrew Israelites, it was a divine opportunity. Ordinarily, those approached by the group quickly rush by. Though they have been name-checked by Kendrick Lamar in a rap called “Yah,” they have also been denounced by others as a hate group. Provocation is their outreach method of choice. And provoke they did.

What The NYT tamely referenced as “profanely clashing” was really, as evidenced in video footage, a nearly two-hour verbal assault perpetrated by the Hebrew Israelites against the Native American group, the Covington students and one unfortunate passerby who just happened to come within spitting distance on a hoverboard. (RELATED: The Real Story Behind The Catholic School Boys And Their Dust Up With A Native American Veteran) 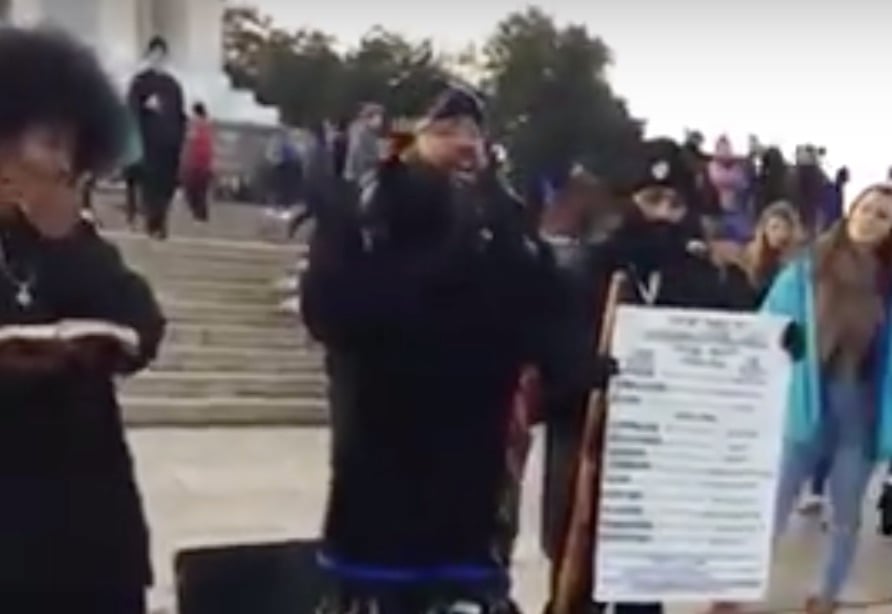 The group first hurled racially-charged insults at the Native Americans, calling one female a “culture vulture” and a “damn blue-eyed demon” and saying that they were all “rented natives” and “just as bad as white men.”

Turning on the Covington students, they continued in the same vein. They called the boys “dusty-ass crackers,” “babies made out of incest” and worse, claiming that their MAGA gear was proof that they were all racists. “This is what Make America Great looks like. When was it great? I dare you to say it,” they taunted.

They all but dared the boys to come closer, claiming that they couldn’t be touched. “We got angels around us,” they said.

As Native American Elder Nathan Phillips approached the students, the Hebrew Israelites continued to yell at the boys, “Y’all better not touch him!”

Even after the confrontation — between Phillips and student Nick Sandmann — that later went viral, the Hebrew Israelites did not let up on the boys:

It wasn’t until the fifteenth paragraph of The NYT’s article — which was only 16 paragraphs long — that the reporter conceded the Hebrew Israelites might be something other than simple street ministers.

But what Mr. Yasharahla might view as great, others call something else: hate.

The Southern Poverty Law Center, which tracks extremist groups, categorized at least 80 groups nationwide that follow Hebrew Israelite theology as hate groups. They account for about a third of the organizations that the center considered black nationalist groups in 2017.