A former U.S. Army private said she is on death’s door because after she was raped in Kuwait the Army treated her like a perpetrator rather than a victim.

Christina Thundathil was a private in Camp Arifjan in Kuwait during the Iraq War when the alleged attack occurred.

The case even came back to embroil Republican Sen. Joni Ernst five years ago as she was running for the U.S. Senate. Then-Capt. Ernst was the Army Officer-In-Charge on the same base as Thundathil when the incident occurred. She interviewed the four alleged perpetrators, a move that has legal experts split.

After a party in the early morning hours of January 1, 2004, Thundathil went home with a man. She said she felt queasy, passed out and woke up with two men on top of her.

“Pvt. Clarke [Thundathil’s maiden name] told him as she was walking someone kicked her in the stomach and knocked her to the ground. She stated there were two males, one tall male — 6 [feet] 4 [inches] — and a much shorter male. As she lay on the ground, the tall male laid on top of her and raped her while the shorter male placed his penis in her mouth,” an investigative report on her rape stated.

Thundathil told The Daily Caller she blacked out and suffered a concussion from the attack. Thundathil went to the hospital on the military base at approximately 2 p.m. on January 1, 2004, and was interviewed by Army Criminal Investigation Division (CID) later that day. Thundathil had a bloody nose and a rip in her jeans, according to notes from the exam.

“Patient was appropriate throughout. She was frightened, shell shocked by what happened,” the medical report stated. 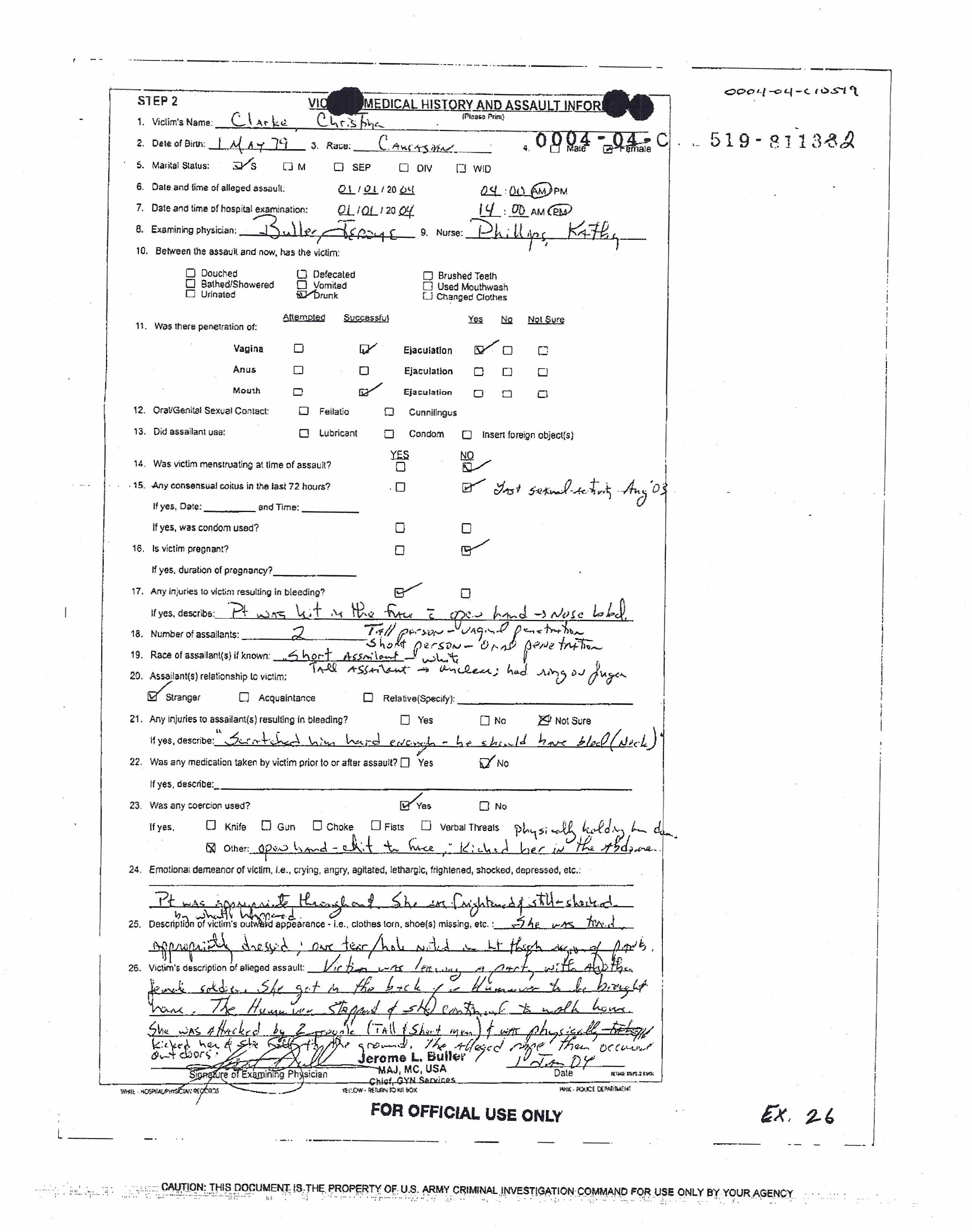 From Victim to Perpetrator

The very next day, the investigation took a turn when her friend, who invited her to the New Year’s party, spoke to CID and contradicted Thundathil.

“[Thundathil’s friend] stated she was approached by Pvt. Clarke at the fitness center Zone II, CAKU (Camden Yards) and Pvt. Clarke provided her with a phone number for this office,” the CID investigator noted, “She denied having said anything that could have been construed as her knowing who may have raped Pvt. Clarke.”

Thundathil’s friend then “provided a sworn statement which contradicted many of the details of Pvt. Clarke’s account.”

Thundathil said she never lied and said the gym where the alleged conversation occurred does not exist on the base. Furthermore, because she was knocked out, Thundathil remembers little and said any discrepancies are due to faulty memory, not lies.

Thundathil had found a photo by this point of one of the men she believed attacked her, but the next time she met with CID on January 4, 2004, she was treated like a suspect. “We know you lied, so make another statement,” Thundathil recalled the investigator telling her.

She was then pressured by the investigator to sign a document admitting she lied, she told TheDC. “I was a private,” she said; she thought she was being ordered to sign the document.

On January 1, 2004, CID met with Captain Joni Ernst, who informed CID that members of her unit, the 432nd Transportation Company, had thrown a New Year’s party, according to the CID investigation.

After Thundathil provided a photo of her alleged attacker to CID, the investigator shared that photo with Ernst, “who identified the individual in the photo,” according to the investigative report. (RELATED: Ernst Reveals She Was Raped In College And Accuses Her Ex-Husband Of Being Abusive)

On January 4, 2004, Ernst, who was responsible for Camden Yards, a section of Camp Arifjan, interviewed the alleged rapist and three others. Those interviews took place before CID interviewed the suspect, and all four claimed the sex was consensual.

“Cpt. Ernst had identified of all occupants of [the alleged perpetrator’s] tent and requested they all provide her with a statement documenting their knowledge of the events of 1 January 2004.” The CID report stated. Those statements were then turned over to CID.

Ernst is now the Republican Senator from Iowa; Thundathil insists that Ernst interfered improperly in the investigation. When Politico reported on this in 2014, a legal expert said Ernst did nothing wrong.

“No matter what the local command does, it has no effect on CID,” said retired Maj. Gen. Mike Nardotti, then a partner at lobbying giant Patton Boggs, told Politico. “The fact that she told them to basically prepare statements, that’s fine.”

An Army spokesperson concurred: “Due to ongoing litigation, we are unable to provide full details in  response to your inquiry. All information currently reviewed indicates that then-Captain Ernst followed all relevant and appropriate Army regulations and policies in effect in 2004 for investigations into allegations of sexual assault.”

But Ernst’s office directed Politico to speak with Nardotti, experts in the Uniform Code of Military Justice (UCMJ), which govern these investigations and who spoke with TheDC, disagreed.

“It would be highly unusual for the head of a military unit to question a service member suspected of an offense, especially if CID was already conducting an investigation into the allegations. Commanding officers are discouraged from actively participating in such investigations, because they would likely be the one responsible for initiating any administrative or disciplinary action involving the matter,” said Gary Barthel, a retired Lt. Col. USMC, and an attorney at the Military Law Center in California.

In 2014, when Ernst was a State Senator in Iowa, Thundathil sent an email to Ernst saying, “I want to know … Why did you lie?”

“CID at Camp Arifjan handled the investigation. I was not involved period,” Ernst said to Thundathil.

Liz Bowman, Ernst’s communications director, issued a statement, saying, “Based on your questions, you unfortunately seem to be misinformed about the facts of this case. More importantly, all of these questions were thoroughly addressed back in 2014. It is telling that they are only now resurfacing as Sen. Ernst prepares to run for reelection.”

Geoffrey Corn is a professor at the South Texas College of Law in Houston, also specializing in military law; he said that while there is no specific code that Ernst violated, he also considered her actions unwise. Corn said one reason is that she is not a trained investigator.

None of the experts who spoke with TheDC were told Ernst was involved before giving their opinions.

The four statements had some discrepancies.

None of the contradictions were addressed by Ernst or by CID. Thundathil also found out in 2014 that her rape kit had been destroyed without being tested.

The rape investigation was closed without any charges filed.

The alleged perpetrator, when reached by phone at work, continued to deny any rape occurred and said Thundathil might have lied because she was going to be late for a work detail.

Thundathil said the consequences were not only that the rape investigation did not move forward; on January 31, 2004; she was discharged under honorable conditions from the U.S. Army — but for misconduct. Thundathil was involved in another incident in September 2003 when she pointed a gun at a colleague.

Being discharged under honorable conditions qualified Thundathil for VA benefits, but because she did not serve a full two years, she does not qualify for full benefits from the Department of Veteran Affairs (VA). (RELATED: VA Doctor Blows Whistle On Opioid Overprescriptions, What Happened Next Was Entirely Predictable)

“She is eligible to receive VA care based on her service-connected disability, not her time in service,” said Susan Carter, the director of media relations at the VA.

Thundathil said even receiving treatment for service-related issues was difficult; in 2005, when she attempted to receive treatment at the VA, she was denied.

The VA stated that same year, “Her statement is on file along with lay statements [statements collected by Ernst]. The DD214 states she received an under honorable conduct discharge on 1/31/2004 for misconduct.” As a result, it was years before she received any treatment from the VA.

Thundathil said she first suffered a traumatic brain injury after an emersion heater blew up in her face in June 2003; the New Year’s Day attack flared up her TBI.

“The Department of Veteran Affairs based my treatment on the outcome of my rape case,” Thundathil said.

The VA said she did not receive benefits until 2012.

“According to our records, she has been enrolled with access to VA health care and medical benefits since Sept. 2012, when her service-connected disability rating made her eligible for cost-free VA health care,” Carter said. 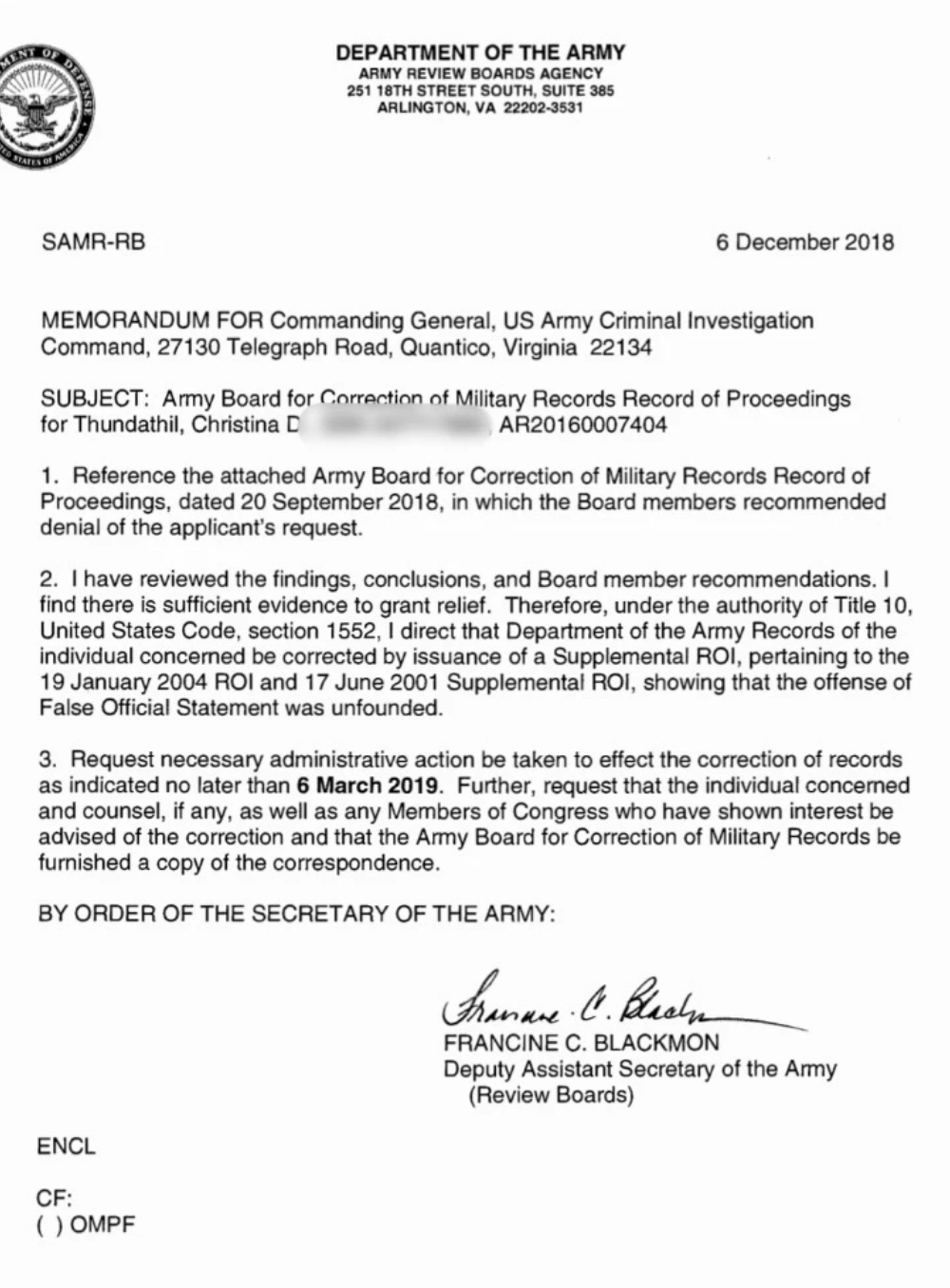 “She is being treated for traumatic brain injury and her diagnosis of military sexual trauma,” Carter noted. Both are considered service-related, making her now eligible for VA benefits. Finally, in December 2018, the Army Board of Correction of Military Records (ABCMR) also reviewed Thundathil’s case, reversing the making a false statement offense.

“I find there is sufficient evidence to grant relief … pertaining to the 19 January 2004 ROI and 17 June 2001 supplemental ROI showing the offense of False Official Statement was unfounded,” the ABCMR stated.

The ABCMR further noted, “The evidence of record clearly indicates the applicant experienced a traumatic event and it appears her trauma was further exacerbated by her sense of not being believed or validated.”

Currently, Thundathil suffers from several serious ailments that could have been treated if she received treatment for TBI immediately.

Thundathil says in an email:

Three major systems [in my body] are affected … with each one complicating one another.

If I had just one disease, then survival would be great. Yet, with restrictive lung disease, COPD, plus pulmonary hypertension with moderate sleep apnea to lastly having small vessel disease with beginning stages of dementia… MY Life is cut very short. In FRUSTRATION I wait…. wait for my ticket to death.