The founder of the viral $20 million border wall GoFundMe campaign exposed the personal information of a retired woman suffering from breast cancer in 2013 after he falsely accused her of operating a satire Facebook page that had authored a meme making fun of him and his family.

Janet Vrotsos unwittingly inserted herself into an internet feud between triple-amputee veteran Brian Kolfage and a satire Facebook page called Republican Family Values (RFV), which had previously published a meme mocking Kolfage, who has since begun fundraising to build a wall on the U.S.-Mexico border.

Determined to find the person responsible for the meme, Kolfage concocted a trap to expose the administrator of RFV.

Kolfage created another Facebook page and formatted it identically to RFV, according to screenshots of a now-deleted social media post where Kolfage explained the scheme. The “fake” RFV page then posted incendiary messages to the real RFV page in an effort to suss out the identity of its administrator.

So when Vrotsos, who said she was suffering from breast cancer at the time, commented on a post on the real RFV page expressing her condolences over an 8-year-old who had died of cancer, Kolfage’s imposter RFV page responded on Christmas Day, 2013, “Go fuck yourself Jan Vrotsos.”

Vrotsos then reported the imposter RFV page and asked it to “stay off my page.”

Three days later, Kolfage published a post on social media detailing how he “set a trap” to determine that Vrotsos was the administrator of what he called a “hate page.”

“It’s Janet … we have a lot of proof,” Kolfage tweeted from his now-suspended Twitter handle @AirmanKolfage. The reply from Twitter user @LadyHuntrFishr is still viewable. 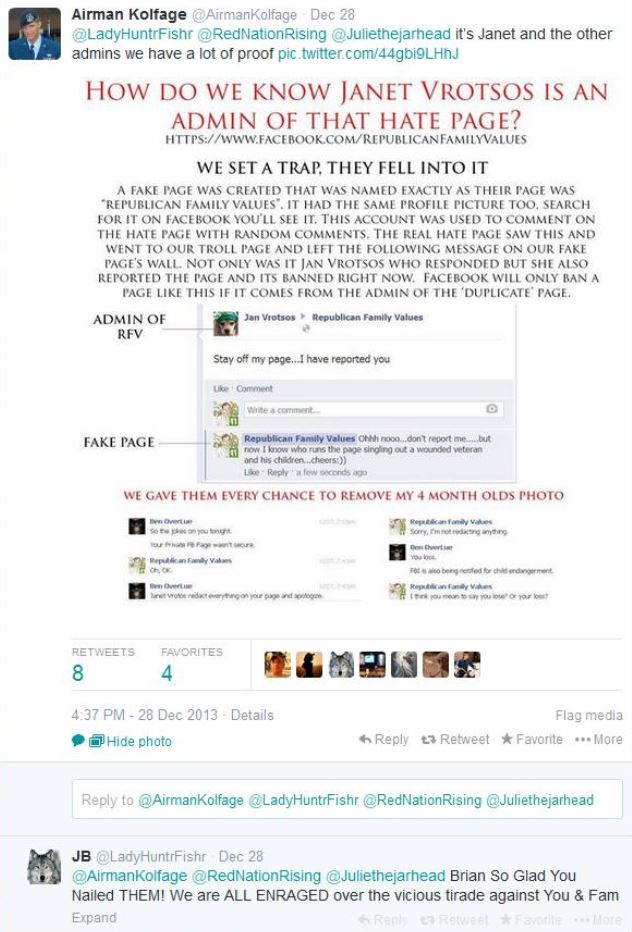 Brian Kolfage detailing the “trap” he set up for Jan Vrotsos on his now-suspended Twitter handle @AirmanKolfage. The reply from @LadyHuntrFishr is still viewable. (Twitter/Screenshot from Jan Vrotsos)

Vrotsos “was falsely accused of being an administrator” of RFV, the creator of the page, which Facebook shut down in 2016, told The Daily Caller News Foundation. “I had no idea who she was until I saw the horrific graphic with all her personal information. At the time, I did everything I could to convince the rabid mob that she was not connected to the page.”

The creator of RFV, who wished to stay anonymous out of fear of reliving what he called the “unfortunate events of December 2013 and beyond,” tweeted at Kolfage at the time of the incident:

@AirmanKolfage I do not know Janet Vrotsos at all. That is 100% true. She does not know me either. She is not associated with RFV.

Despite this, Kolfage continued to promote that Vrotsos was an administrator of the page. Along with announcing the success of his trap, Kolfage produced a screenshot of a post Vrotsos allegedly authored, which stated “disabled veterans are worthless and all should have died.”

Kolfage used the statement to call on his followers to “expose” Vrotsos in a post containing her home address, emails and telephone numbers. 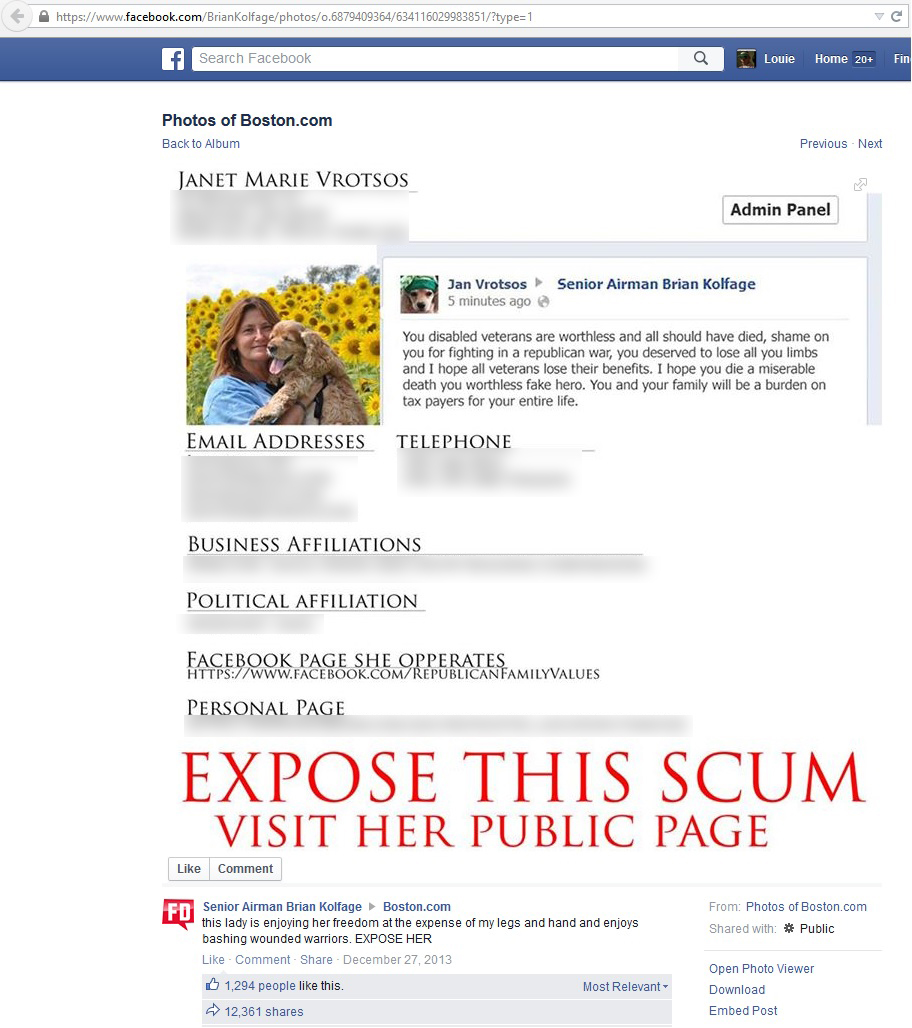 Vrotsos, the now-66-year-old daughter of a World War II veteran, adamantly denies she authored the post. She initially thought her account had been hacked. TheDCNF reviewed correspondence between Vrotsos and a computer forensics firm that determined the Facebook post Kolfage said she wrote did not come from her computer.

Kolfage said in a now-deleted Facebook post five months later that he was “convinced that Jan Vrotsos did not write that vile message that was posted to my wall.”

“Her account was most likely spoofed,” he said. “Sadly, we may never know the identity of the malicious person who orchestrated this fiasco.”

A local branch of the union that represented Vrotsos throughout her 41-year career in the communication industry, the International Brotherhood of Electrical Workers, immediately came to her defense in a statement saying that she had fallen victim to a “cruel internet hoax.”

Vrotsos filed reports with the FBI’s Internet Crime Complaint Center and Massachusetts police departments, she said in a follow-up statement from the union in January 2014.

“The fraud I am reporting has resulted in multiple death threats to me and my family,” Vrotsos said in the statement. “I had a caller tell me that I would get a bullet in the head. I had my phone disconnected.”

“Also, a caller had told my mother that ‘she better get her affairs in order,'” she continued. “My mother is 81 years old and has been terrified since this all began.”

“It was awful. It was a nightmare,” said a longtime friend of Vrotsos, who wished to stay anonymous due to fear of retaliation from Kolfage.

“We saw a side of human nature that I’ve only heard about,” said the friend, who is a military veteran. “I never witnessed or been around anything like that. I just did not know that people could treat other people the way they did. It’s just been an eye-opening, heart-wrenching experience.”

Liberal blogger Thomas Clay Jr. came to Vrotsos’s defense after Kolfage doxxed her and has remained friends with her.

“I didn’t know Jan from Adam, but I knew from a psychological profiling standpoint there is no way she wrote what Brian said she did,” Clay told TheDCNF.

“Jan is the nicest person you could ever hope to meet,” he said. “Can you imagine some 60-year-old retiree who’s the daughter of a World War II hero saying something like that? She never said that. Brian made it up completely.”

“I still get a post every once and a while,” Vrotsos said. “It has been about a year. Most of the messages were in the first two years.”

In fact, Kolfage now claims he doesn’t know who Vrotsos is.

When a Twitter user asked about an apology to Vrotsos, Kolfage tweeted in response on Jan. 18, “Who?” 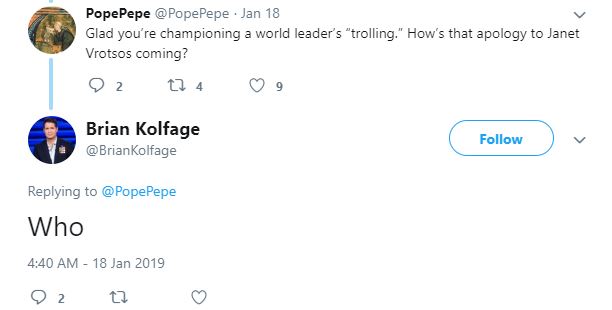 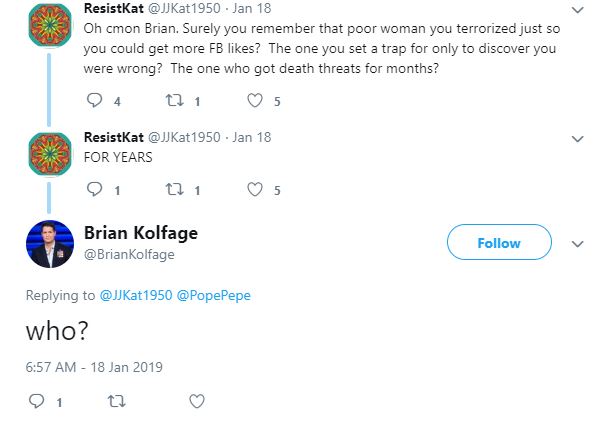 Vrotsos chuckled when asked for her reaction to Kolfage’s newfound amnesia. But Clay was incensed.

“Who? Who? I swear to God if I get within five feet of that motherfucker, I will toss him out of that chair and throw him in a pool full of alligators. Fuck that guy, I hate his guts,” Clay told TheDCNF. “He’s a fucking lying mother fucker. He is a pathological and terminal habitual liar. Anything he says is lies.”

“A man of honor would never attack a woman. Ever. Under any circumstance,” Clay continued. “He not only did it, he doesn’t care that he did what he did to a woman who was completely innocent. And the only reason why he did it is because it went viral.”

“And that bastard has the audacity to say, ‘Who’s Jan?’ You scumbag. Like he didn’t know,” Clay said. “Where I’m from — I’m from Kentucky — you pick on women, you’re human fucking garbage.”

U.S. District Judge Russel Holland on May 29, 2015, ordered Koflage to sign a written statement admitting that he published her information on his Facebook page and that he regrets anything that was done to her as a result.

“I published Jan’s information on my public Facebook page and I regret anything that transpired to Jan as a result of that,” Kolfage wrote in a signed statement submitted to the U.S. District Court of Arizona on June 30, 2015.

Kolfage was ordered to sign the statement as part of a settlement agreement between him and seven individuals he sued in July 2014 for allegedly bullying and committing libel against him on social media.

“Of the seven people he sued, four of us were vets. Of those four, three of us outranked him,” said Air Force veteran Darren Remington, who became a target after he criticized Kolfage for posting hyper-political content on Facebook while Kolfage had a profile picture of him in his military uniform.

“I poked at him about the uniform thing, he took great offense to that,” Remington told TheDCNF. “He is super sensitive to any potential criticism.”

In the lawsuit, Kolfage accused Remington and the other defendants of making false and inflammatory statements about Kolfage, saying they called him a fraud, a racist, an adulterer and a plagiarizer.

The case was dismissed with prejudice nearly a year later in favor of the defendants, meaning Kolfage can’t sue them again over the same incident. The only concession the defendants wanted from Kolfage was an apology to Vrotsos.

“He doxxed Jan and then we all went after him, basically,” Grant said. “I wasn’t gonna let go the fact he was doxxing people. You just don’t do that, especially when you got 10,000 crazy fans. You don’t know what kind of nut is in that group, and what they may do.”

Kolfage’s responded by playing the victim and threatening to sue, according to Grant.

Navy veteran Louis Caponecchia said he was dumbfounded when he learned through media reports that he was being sued.

“The news ran it like he was suing people because they said these mean things,” Caponecchia told TheDCNF. “But that’s not against the law even if that were the case.”

Like Grant, Kolfage targeted Caponecchia after he stood up for Vrotsos.

“Jan was a flash. Jan got him the press he wanted and that got his name out there,” he said. “She literally shut everything down and went into her own hiding. After that, I was his central target for several months leading up to the lawsuit.”

“We never got an answer as to who allegedly saw it, who took it,” Caponecchia said, referring to the original post Kolfage said Vrotsos wrote, as opposed to the screenshot Kolfage published. “None of his own people ever saw the comment.”

Caponecchia has never met Vrotsos in person, but said he felt compelled to get Kolfage to apologize to her because he knew the damage Kolfage inflicted on her reputation would last.

“With Jan, she didn’t know much about the internet or anything,” he said. “Even after we all stopped and Brian moved on, Jan would continue to be harassed down the road.”

And while Kolfage did admit wrongdoing in federal court, Caponecchia is trying to mitigate the damage Kolfage inflicted on Vrotsos’s reputation.

“He’s never attempted to try to get these other sites to remove that bullshit story,” Caponecchia told TheDCNF, referring to other pages that posted the dox. “It annoys me that after this many years I’m still having to do this, but not him.”

“There’s this sense of powerlessness,” he said. “The years go on and I just sit here thinking he’s going to get away with it. Nobody’s ever going to know. Even if Jan has moved on, it’s just the simple fact it happened to her and no one was ever held responsible for it.”

“He’s never had to answer for anything. It’s absurd — if you tell me he’s honorable it’s like telling me Jeffery Dahmer was a good person. It’s absurd to me,” Caponecchia continued. “It’s frustrating that nobody knows the other side of him.”

Kolfage did not respond to multiple requests for comment.