Bullpup-style firearms have become increasingly popular in recent years due to their enhanced maneuverability—without sacrificing downrange effectiveness. That being said, most new product development in the realm has focused primarily on rifles, not shotguns. Fortunately, EAA Corp. is challenging that trend by importing the MKA 1923 bullpup 12-ga. shotgun, which is made in Turkey by Husan Arms.

The MKA 1923 shotgun is a bullpup by any definition; the action is housed in the butt of the gun, and the ejection port is rearward of the pistol grip, near the comb. Feeding the shotgun is a detachable, single-stack, five-round magazine featuring a steel body. It extends downward, through the lower receiver about halfway between the pistol grip and the recoil pad. Because the action is housed within the rear portion of the MKA 1923, Husan Arms was able to incorporate a 20″ barrel to maximize external and terminal ballistics, and yet maintain a short, 29.5″ overall length.

As a gas-operated shotgun, the 3″-chambered MKA 1923 must be able to reliably cycle both light and heavy loads. To do so, the gun is shipped with two gas rings. According to the manual, the “L. Loads” gas ring, which comes preinstalled, is designed for use with shells having velocities ranging from 1200 to 1300 f.p.s., while the “H. Loads” ring handles anything over 1300 f.p.s. It’s important to note that some light trap and skeet loads may not cycle the gun reliably. 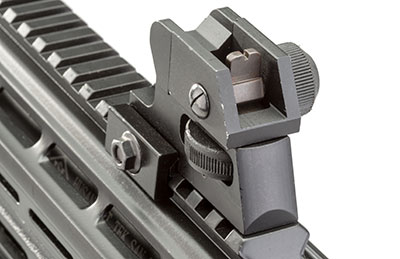 We installed the included sight set onto the gun’s top rail. It consists of a wing-protected front post (top) and a rear unit that can be adjusted for windage and elevation by way of knurled knobs (l.) that make positive, audible clicks when rotated.

Changing the gas ring requires fieldstripping of the gun, which is covered in detail in the owner’s manual. The process is tedious and time-consuming; in fact, we managed to break the flimsy charging handle spring during one such disassembly. Unfortunately, the process needed to change the gas ring is the same as for cleaning the MKA 1923, so be prepared with a hearty dose of patience.

The barrel is threaded to accept choke tubes, and the gun comes with three—improved cylinder, modified and full—in a handy plastic case with a wrench for changing them. Notches denote the constriction. All testing was conducted using the improved cylinder choke, which was pre-installed. The barrel length provides a good compromise between downrange performance and maneuverability.

Atop the barrel is a 15½”-long aluminum handguard with 26 cooling ports and an integral Picatinny rail providing 13¾” of mounting space for an optic. Accompanying the gun, but not installed, are an aluminum post front sight set within wings and a rear notch sight that’s adjustable for windage and elevation by rotating the knobs. The knobs make positive, audible clicks when moved.

The non-bilateral fire controls are found on the left side of the lower receiver. To cycle the action, there’s a non-reciprocating bolt handle below which is a sliding, two-position safety that blocks the trigger. The bolt catch is just below the comb and to the rear of the magazine well.

Typical of bullpups, the MKA 1923 has a heavy trigger pull. According to a Lyman Digital Trigger Gauge, the average pull weight was 11 lbs., 5 ozs. Fortunately, minimal creep offset the substantial weight; however, overtravel was notably long.

Besides being aesthetically pleasing, the lower receiver has several advantageous features. Foremost, there’s a 1¾”-long accessory rail molded into the forend. Although the trigger guard is sized a tad too small for a gloved finger, the way that the forward section drops down and wraps around to meet the pistol grip is welcomed, as it prevents slippage during recoil. The testers found the grip to be sized ideally for a comfortable and secure hold. Lastly, there are sling attachment points on the left side, and capping the butt is a pliable, 1-1⁄8“-thick rubber recoil pad.

To test the MKA 1923, we opted to forgo the provided open sights and instead installed a Leupold Delta Point reflex-style, red-dot sight. Also, since the shotgun is best-suited for self-defense and competition, we decided to use the improved-cylinder choke when patterning the selected ammunition—Hornady’s Critical Defense 2¾” 00 Buck load, which features eight pellets.Thanks to the VersaTite wad, patterns at 25 yds. proved to be exceptionally tight; in fact, only one pellet out of 80 (10 consecutive shots) exited the 30″ circle, and, as is evident in the accompanying diagram, most fell well within the 21″ inner ring. 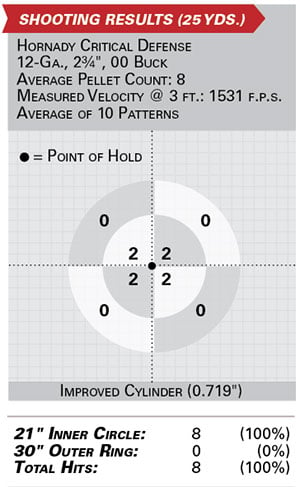 With patterning completed, we proceeded to dump magazine after magazine of ammunition—sorted by velocity and with the correct gas ring in place, of course—to double-check functioning. These included everything from light 2¾” target loads to 3″ magnum turkey shells. Outside of subsonic target loads, which we didn’t expect to cycle the action, everything else functioned flawlessly.

The MKA 1923 is exceptionally butt-heavy, which is a “Catch-22”; grabbing the pistol grip with a single hand and pointing the muzzle downward makes the butt want to rotate forward toward the ground, out of the hand. Once shouldered, though, that weight, paired with the tackiness of the recoil pad, keeps the gun in place during recoil. Concerning recoil, the gun’s 9-lb., 11-oz. weight and gas operation help mitigate recoil greatly. In fact, 3″ turkey loads delivered no discomfort to the shoulder. The only pain we felt was in the web of the hand after shooting multiple boxes of buckshot, turkey loads and heavy game shells. Still, it wasn’t bad. Please note that the length of pull is a long 17¼”, so smaller individuals might struggle to reach the trigger.

Maneuvering the MKA 1923 is almost graceful; we particularly liked that, unlike a traditional sporting shotgun, it was easy to take an aggressive stance, thereby minimizing muzzle flip. Moreover, the gun’s design is such that, in the unlikely event that you’re wounded in a self-defense scenario, it can easily be shot one-handed. We did so, and not only was it easy, but we shot accurately as well.

Obviously, we were displeased with the quality of the charging handle spring, and the disassembly process is onerous, but the EAA MKA 1923 combines the benefits of the beloved bullpup with the proven stopping power of the ubiquitous 12-ga. to create a portable powerhouse. It’s one of the few guns of its type available at this time, and it deserves consideration. 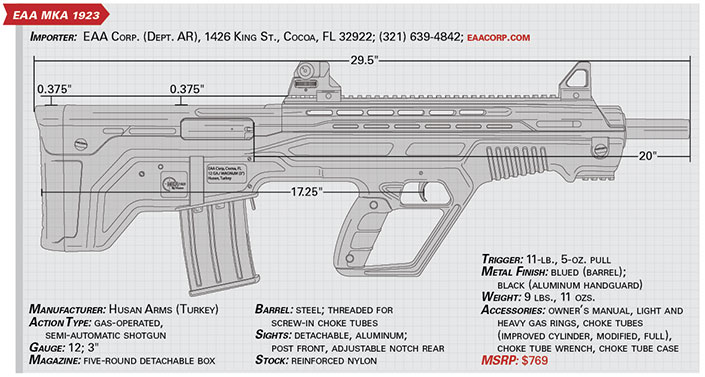