The Maduro regime continued to worsen the humanitarian crisis in Venezuela on Wednesday, as an oil tanker and two containers blocked a bridge necessary for the delivery of foreign aid, according to CNN.

Still having control of the military, President Nicolas Maduro sent the Venezuelan National Guard on Tuesday to effectively block any foreign aid passing through the Tienditas Bridge, reported the Miami Herald. 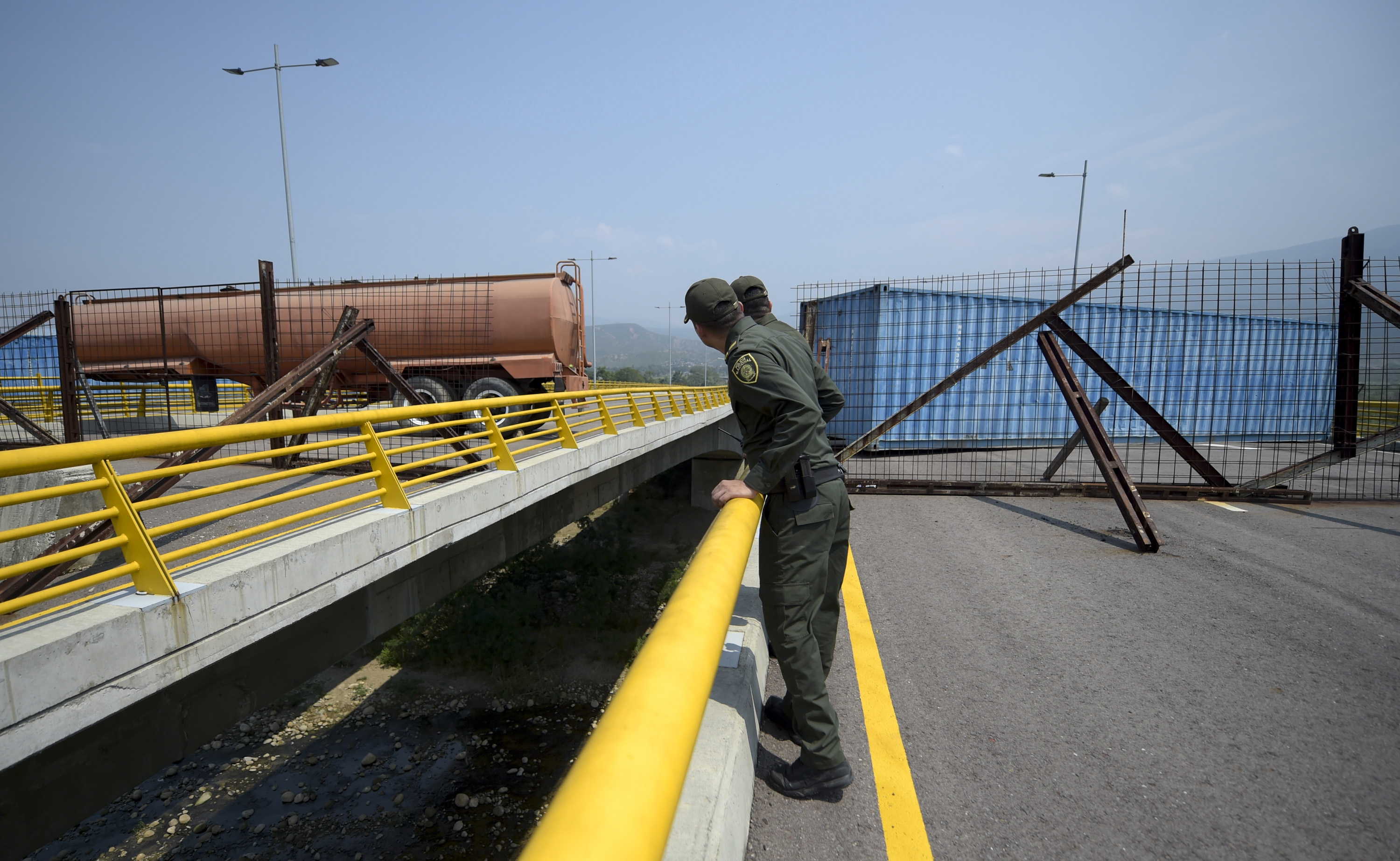 Colombian policemen look at the Tienditas Bridge, which links Tachira, Venezuela, and Cucuta, Colombia, after it was blocked with containers by Velezuelan forces, on February 6, 2019. (RAUL ARBOLEDA/AFP/Getty Images)

Located in Cucuta, Colombia, the bridge was one of the three collection points for foreign aid issued by opposition leader and interim president Juan Guaidó. The other two points are set at the Brazil-Venezuela border and an unidentified Caribbean island.

Maduro has consistently refused foreign aid, proclaiming that “we are not beggars” and that the aid could be used as a cover to invade the economically challenged country. 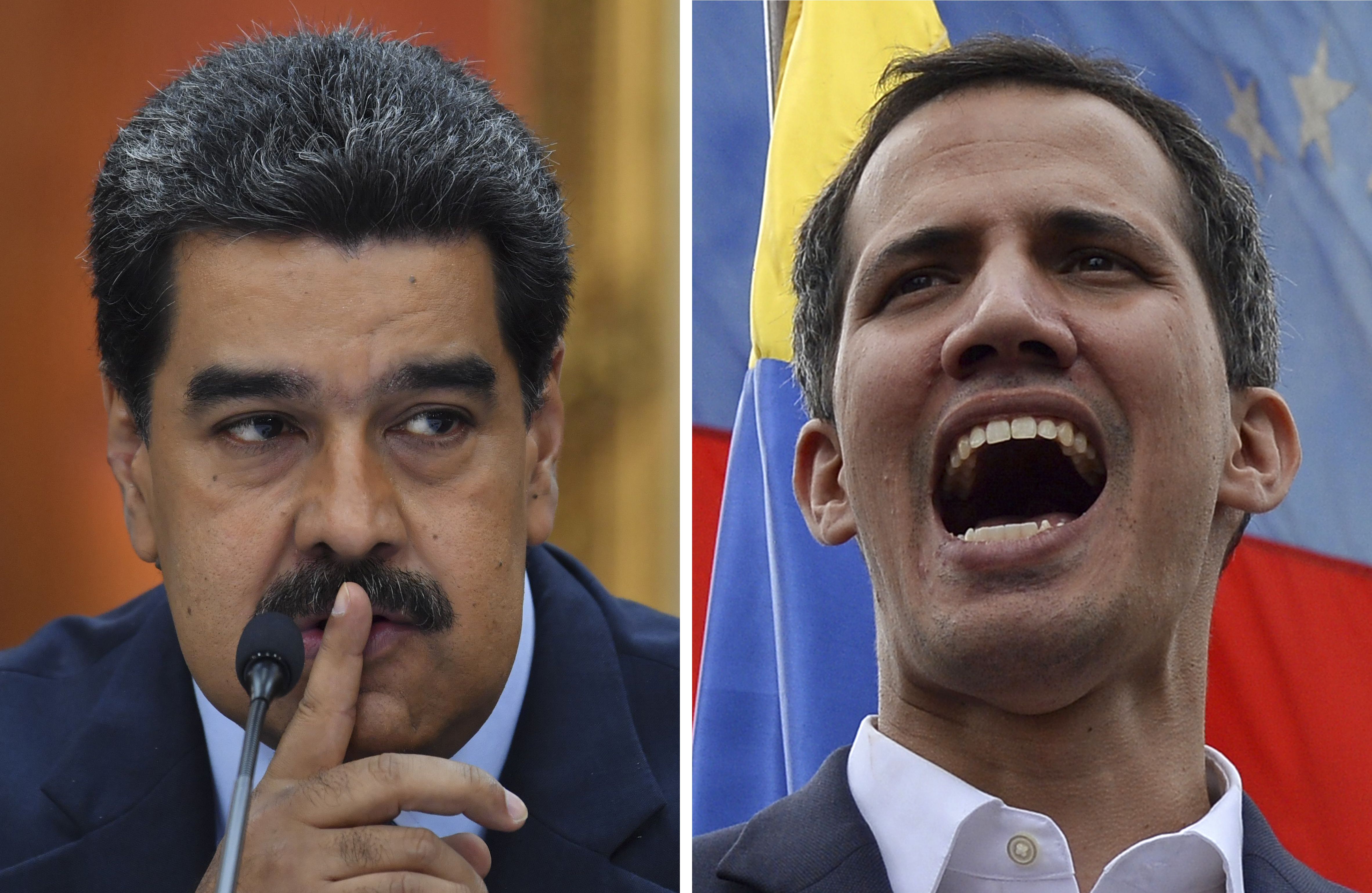 This combination of pictures created on February 5, 2019 shows Venezuelan President Nicolas Maduro gesturing during a press conference at Miraflores Presidential Palace in Caracas, on January 9, 2019 and Venezuela’s National Assembly head Juan Guaido addressing the crowd during a mass opposition rally in Caracas on January 23, 2019. (Photo by STF/AFP/Getty Images)

Guaidó called for the Maduro-loyal military to allow the needed aid to enter the country Wednesday.

“Brother, let the aid in. Do not stop it,” Guaidó said. “The end of the usurpation will be the end of hunger.”

The blocking of the bridge has called for U.S. Secretary of State Mike Pompeo to call for the aid to be let through. He tweeted, “The Maduro regime must LET THE AID REACH THE STARVING PEOPLE.”

The Venezuelan people desperately need humanitarian aid. The U.S. & other countries are trying to help, but #Venezuela’s military under Maduro’s orders is blocking aid with trucks and shipping tankers. The Maduro regime must LET THE AID REACH THE STARVING PEOPLE. #EstamosUnidosVE pic.twitter.com/L4ysYJaM6H

As the humanitarian and economic crisis builds every day in the South American country, around 40 countries have backed Guaidó with contributions from major countries. (RELATED: Major EU Countries Follow Trump – Recognize Juan Guaidó As Venezuelan President)

The Trump administration has pledged $20 million and has already started packing pallets of foodstuffs to be shipped. In addition, Canada has pledged $40.4 million alongside Germany with $6.86 million Monday.

Trump reiterated his support for Guaidó and Venezuela during his State of the Union speech, saying, “We stand with the Venezuelan people in their noble quest for freedom.”