“To be clear, this tweet counts both as inane AND anti-Semitic,” Nadler, who is Jewish, wrote Monday morning in response to a tweet that Jordan sent Sunday night.

To be clear, this tweet counts both as inane AND anti-Semitic. https://t.co/zUPL0hIcDf

Nadler was responding to a tweet in which Jordan used a dollar sign in Steyer’s last name. The tweet led to allegations that Jordan was perpetuating stereotypes about Jewish people.

C’mon @RepJerryNadler—at least pretend to be serious about fact finding.

What a Kangaroo court. https://t.co/BpNIzdON1e

Jordan, the top Republican on the House Oversight Committee, was responding to Nadler’s plan to submit document requests to dozens of White House officials and Trump associates as part of a sprawling investigation into whether Trump obstructed justice. Republicans believe Nadler is setting the stage for impeachment proceedings against Trump. (RELATED: Tom Steyer: Billionaire Democratic Donor And Fusion GPS Client) 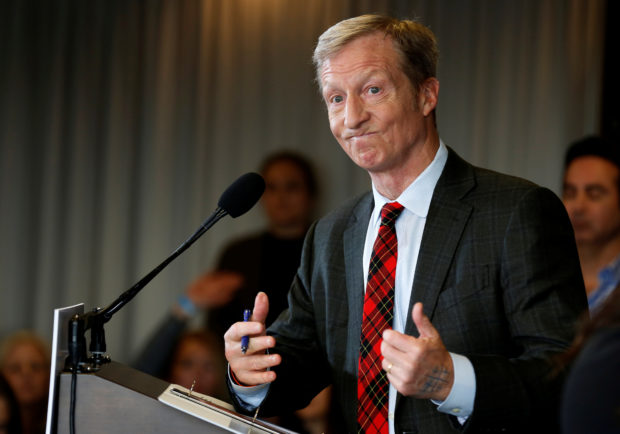 Tom Steyer, a hedge fund manager and a prominent Democratic fundraiser who has mounted a high-profile advertising campaign advocating the impeachment of U.S. President Donald Trump, holds a news conference to announce plans for his political future, in Washington, U.S., January 8, 2018. REUTERS/Joshua Roberts

Impeachment has been a hobbyhorse for Steyer. The San Francisco-based hedge fund manager has spent millions of dollars over the past year on a campaign to impeach Trump.

Notably, when Steyer responded to Jordan’s tweet, he did not allege it was anti-Semitic.

Don’t worry, @Jim_Jordan, we will be reminding voters in your district which side of history you’re on regarding @realdonaldtrump’s crimes, corruption, and coverups very soon. https://t.co/uAUw4eMVe0

“Tom Steyer is a billionaire that is spending millions of dollars to elect Democrats and incite them to impeach President Trump,” the spokesman told The Daily Caller News Foundation.

“The use of the dollar symbol in conjunction with his name was a reference to his political spending and the insinuation that there was anything more to it is absolutely preposterous.”

Steyer’s father is Jewish, but he is a member of the Episcopalian church, according to various news reports. According to Men’s Journal, Steyer became heavily involved in the church in his 40s, and attends services almost every Sunday.

Steyer spent more than $73 million during the 2018 election cycle, according to Federal Election Commission records. All of the donations were to Democratic or liberal campaigns and political committees.

Republicans brought up Steyer during the hearing with former Trump attorney Michael Cohen.

Republican Georgia Rep. Jody Hice asked Cohen whether Steyer was paying any of his legal bills. Cohen said he was unaware of any payments from Steyer, and the billionaire denied contributing to Cohen after the hearing.