It was a gun so perfectly suited for law enforcement use that it was nicknamed the “Peace Officer’s Dream Sidearm.” Built on Smith & Wesson’s medium-size K-frame, the revolver was the result of input from none other than Bill Jordan—a Border Patrolman, World War II combat Marine, exhibition shooter and fast-draw artist. Initial .357 Magnum offerings from S&W were all built on the heavier N-frame, and Jordan advised the company to build a gun on the smaller and lighter frame with a 4″ heavy barrel and adjustable sights.

The .357 Combat Magnum was born in 1957, and somewhere along the way S&W named it the Model 19. It eventually became the standard by which all duty guns would be judged, while also developing a huge following among civilians. Through the years there were many changes made to the Model 19—some to make the gun more durable and safer, while others were to make it less expensive to manufacture. 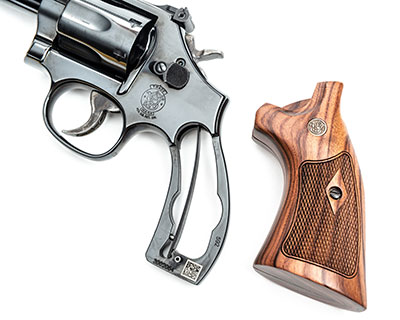 The revolver has a round-butt frame, but comes with a set of squared-off stocks, allowing those shooters who prefer rounded-contour stocks to install replacements.

In 1999, at a time when most law enforcement agencies had already transitioned from revolvers to semi-automatics, Smith & Wesson quietly dropped the Model 19 from its catalog. But the revolver remained popular with sport shooters, and sustained interest in it prompted the manufacturer to re-introduce the model in May of last year.

Quoting from Smith & Wesson’s press release, “The Smith & Wesson Classics series of revolvers have been enhanced with modern internal components but mimic the look and feel of classic models. The Model 19 Classic revolver features a set of handsome walnut grips, a 4.25″ barrel, a black adjustable rear sight, and a red ramp front sight.” It should be noted that the new Model 19 is not a reproduction of the original gun, nor is it a resurrection of the last gun offered by S&W nearly two decades ago; while the new Model 19 may look similar to vintage guns, it is a completely new revolver.

Most of the internal lockwork, including the hammer and trigger, is manufactured using the metal injection molding process (MIM) that requires less hand-fitting of the parts. Both the hammer and trigger have a color-casehardened finish. The original Model 19 used a heavy barrel with a rib and an integral ejector rod shroud; the new Model 19 uses an untapered 410 stainless steel barrel that is threaded into the carbon steel barrel shroud. A sophisticated machine gauges the barrel, receiver and cylinder and cuts the barrel’s threaded end to length, eliminating the intricate handwork previously required to properly clock the front sight so that it is perfectly vertical, and ensuring a precise cylinder gap. The lines of the barrel shroud are very similar to those of the original gun, with a heavy rib along its top and an ejector rod shroud.

The locking bolt that was located inside the ejector rod shroud of original Model 19s has been eliminated and replaced with a ball detent on the revolver’s frame, forward of the cylinder window. The spring-loaded ball snaps into a recess on the yoke, and this system reduces cylinder drag for a smoother double-action trigger pull. Smith & Wesson also claims this setup gives the gun greater accuracy and is mechanically stronger than the old system. The Model 19 Classic also uses a frame-mounted firing pin rather than the original hammer-mounted pin. Another noticeable difference is the small circular hole above the cylinder release—a key lock common to all new-manufacture S&W revolvers. When engaged, it locks the revolver’s action and renders it unable to fire. 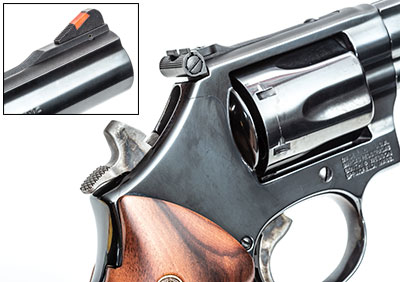 The Model 19 Classic pairs a fixed, ramp front sight with red insert and a blade rear that adjusts for both windage and elevation.

The Model 19 Classic features a rear sight that is click-adjustable for both windage and elevation, and the front sight is ramped and features a red insert. Smith purposely builds the front sight wide for quick target acquisition during defensive shooting. There is very little light on either side of the front sight, but judging from the results listed nearby, this did nothing to hinder the gun’s accuracy at the 25-yd. line.

All groups were fired in single-action mode from a seated rest using a DOA Tactical portable shooting bench and a Millett BenchMaster. The Model 19’s single-action trigger breaks at 4 lbs., 4 ozs., with a little bit of creep, but it is crisp and predictable and allowed us to fire some very tight groups. 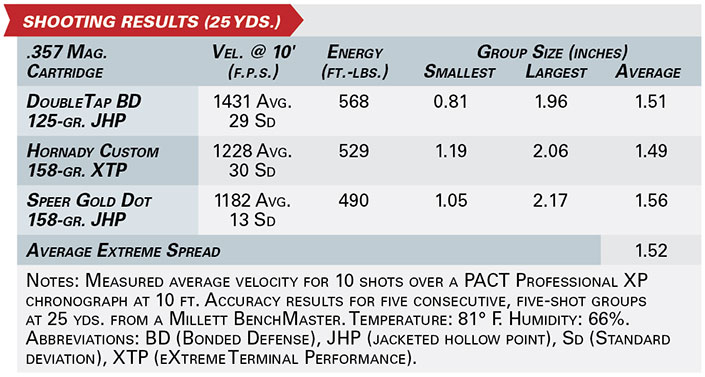 The single best group was fired with DoubleTap’s 125-gr. Bonded Defense JHPs and measured an astonishing 0.81″. Speer’s 158-gr. Gold Dot JHPs produced the second smallest group, placing five shots into a cluster just over 1″. Hornady’s 158-gr. XTP Custom JHP had the smallest average group size, measuring under 1.5″. Being a .357 Mag., the Model 19 Classic is also capable of firing the .38 Spl. cartridge, and doing so through this gun is an absolute pleasure.

Smith has outfitted the Model 19 Classic with a trigger that is just about ideal for double-action shooting. It is narrower with beveled edges and a polished smooth trigger face, and shooters gain a mechanical advantage by using the first distal joint to pull the trigger rather than the finger pad that wider triggers require. Double-action pull of our test sample required 9 lbs., 8 ozs., of pressure to fire, and the revolver cycled smoothly without any glitches. We set up steel silhouettes at 15 yds. and found the gun’s smooth double-action mode made it easy to place multiple hits on target quickly.

Aiding the gun’s controllability are the factory stocks. While the checkered walnut stocks may share the same profile of S&W target stocks of old, they are actually much thinner and, in our estimation, provide more shooters with a better grip. It is interesting to note that the Model 19 Classic actually has a round-butt frame, but the stocks provided with the gun give it a square-butt look and feel. In the event owners do not find the square butt to be comfortable, they’ll have the option of switching to round-butt stocks.

Overall, we were impressed with the new Model 19 Classic. While it draws inspiration from a gun that first appeared more than 60 years ago, it is a new gun in almost every respect. Throughout our testing, it proved to be 100 percent reliable and exceptionally accurate, and would make a great choice for those looking for a medium-size .357 Mag. revolver. 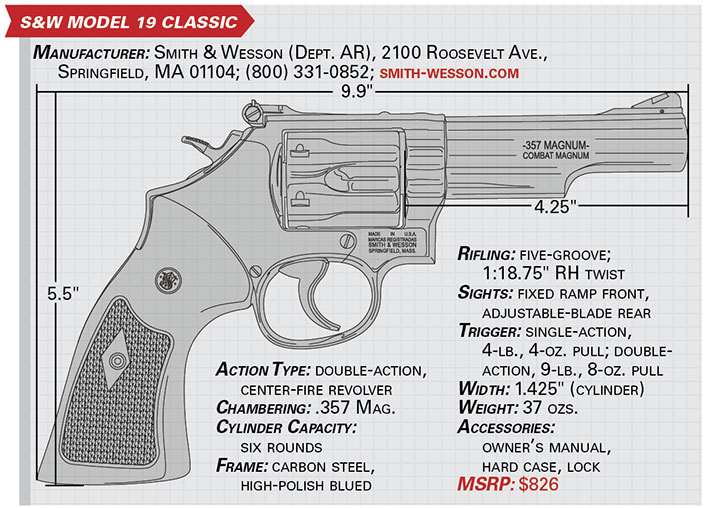 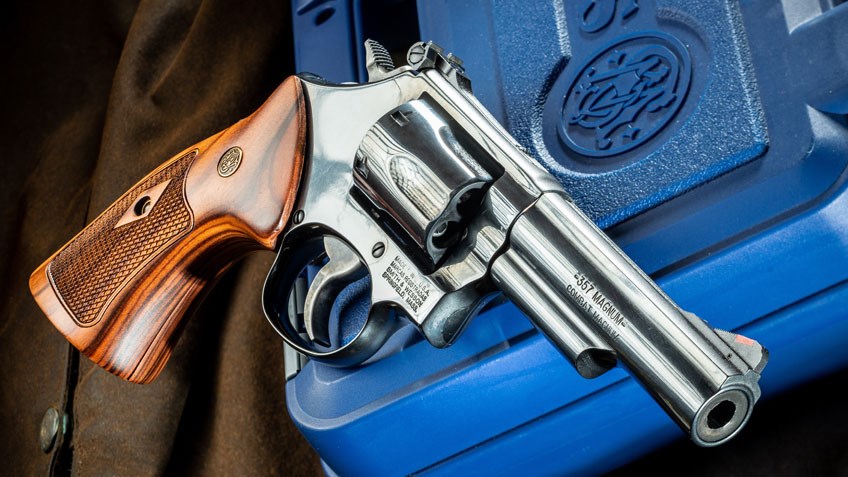