A group of lawmakers that span far across the political spectrum has teamed up to convince President Donald Trump to end U.S. involvement in Yemen’s civil war.

Both the Senate and House of Representatives passed a war powers resolution that calls on the U.S. government to end its support for the Saudi Arabia-led coalition fighting against Houthi rebels and their allies in Yemen. The war, which has raged on for over four years, has taken the lives of an estimated 67,600 civilians and combatants since January 2016.

Trump, wary of ceding executive authority, is reportedly leaning toward vetoing the resolution. Numerous Democratic and Republican lawmakers, however, are lobbying the president to change his mind.

A bipartisan group of congressmen and senators urged Trump, in a letter delivered Thursday to the White House, to sign into law Senate Joint Resolution 7 and is requesting to meet with him to discuss the merits of ending U.S. participation in the years-long conflict. Signers of the letter include leading progressives such as Vermont Sen. Bernie Sanders and California Rep. Ro Khanna and also include stalwart conservatives like Utah Sen. Mike Lee and Florida Rep. Matt Gaetz.

“We believe that by signing this historic legislation to terminate an unconstitutional war that predates your presidency, you will set a new precedent for cooperation with both chambers of Congress to overcome such entrenched opposition to foreign-policy restraint,” the letter read.

“We also hope that such a partnership between the president and Congress to end U.S. involvement in the Saudi-led coalition’s war against Yemen’s Houthis can serve as a bipartisan springboard to achieve our shared interest in responsibly drawing down needless conflicts throughout the world, such as ongoing U.S. military interventions in Afghanistan and Syria,” the letter continues.

The civil war began in March 2015 when Houthi rebels — Shia militants already in control of northern parts of Yemen — sought to take control of the entire country. The Houthis are backed by forces loyal to Ali Abdullah Saleh, the now-deceased former president of Yemen, and other groups. These forces are fighting against Yemeni President Abdrabbuh Mansour Hadi and his government.

Alarmed by the rise of a Shia militia group at its doorstep, the Saudi Arabian government inserted itself into the military conflict, supporting pro-Hadi forces, along with a coalition of other Sunni-majority countries. U.S., French and U.K. logistical and intelligence support has assisted the Saudi Arabia-led coalition. 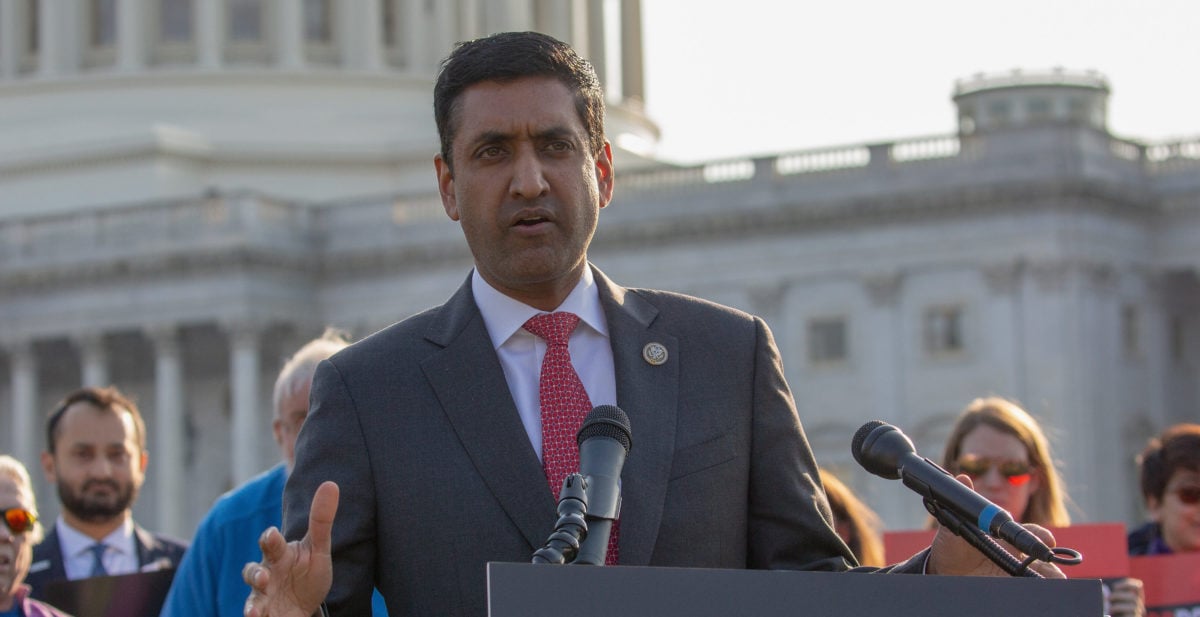 Rep Ro Khanna speaks at a rally with MoveOn members and allies gather with leading senators to demand that the Senate vote to reject Mike Pompeo’s nomination for secretary of state at U.S. Capitol on April 11, 2018 in Washington, D.C. (Photo by Tasos Katopodis/Getty Images for MoveOn.org)

As the war rages on, many lawmakers feel it’s time to end American involvement.

“[The resolution] is one way for the president to make good on his view to get out of these endless wars,” Khanna said to The Daily Caller News Foundation. “This would be the first president in American history to ever sign a war powers resolution. That would be a big deal that he’s recognizing the constitutional role for Congress to limit these foreign interventions.” (RELATED: Senators Propose Limits To US Support Of Saudi Coalition In Yemen)

“He can literally help prevent a famine that could take 14 million lives, so this is really an opportunity for him to do something extraordinary for the world,” the Democratic congressman continued.