A Hong Kong pastor preached Christ to a courtroom Tuesday after being convicted of “conspiracy to commit public nuisance” for publicly protesting for democracy.

A Hong Kong court convicted Chu Yiu-ming, lead pastor of Chai Wan Baptist Church, and eight other leaders of the 2014 pro-democracy Umbrella Movement of “conspiracy to commit public nuisance” and other charges related to Occupy Central public protests in which they urged the Chinese government to bring democracy to Hong Kong as promised, Christianity Today reported.

Chu, then facing up to seven years in prison per his conviction, took the opportunity to publicly proclaim the gospel of Jesus and to share his testimony with the court. (RELATED: Chinese Pastor Faces 15 Years In Prison For ‘Inciting Subversion Of State Power’)

“Today, old and gray, I find myself in the defendants’ dock, making a final plea as a convict. It looks so absurd, if not outright shameful for a person holding holy office,” the 75-year-old pastor said, according to Hong Kong Free Press. “And yet, at this very moment, my heart tells me that with this defendant’s dock, I have found the most honorable pulpit of my ministerial career. The valley of the shadow of death leads to spiritual heights.”

Chu shared the story of his childhood and how he survived the “brutality of the land reform movement” in mainland China, endured homelessness and beatings by Triad gang members in Hong Kong after the death of his grandmother, and converted to Christianity while struggling with thoughts of suicide after being diagnosed with a rheumatic heart disease.

That faith in Christ, inspired by the kindness of an old woman who offered him a job at a local school and a Christian teacher whom he met there, led him to serve at the church in Chai Wan. He worked with drug addicts, homeless people, dissidents who needed aid after the Tiananmen Square massacre and gang members, driven by a belief that emphasized the dignity of all humans as created in the image of God, caring for the poor and freedom. 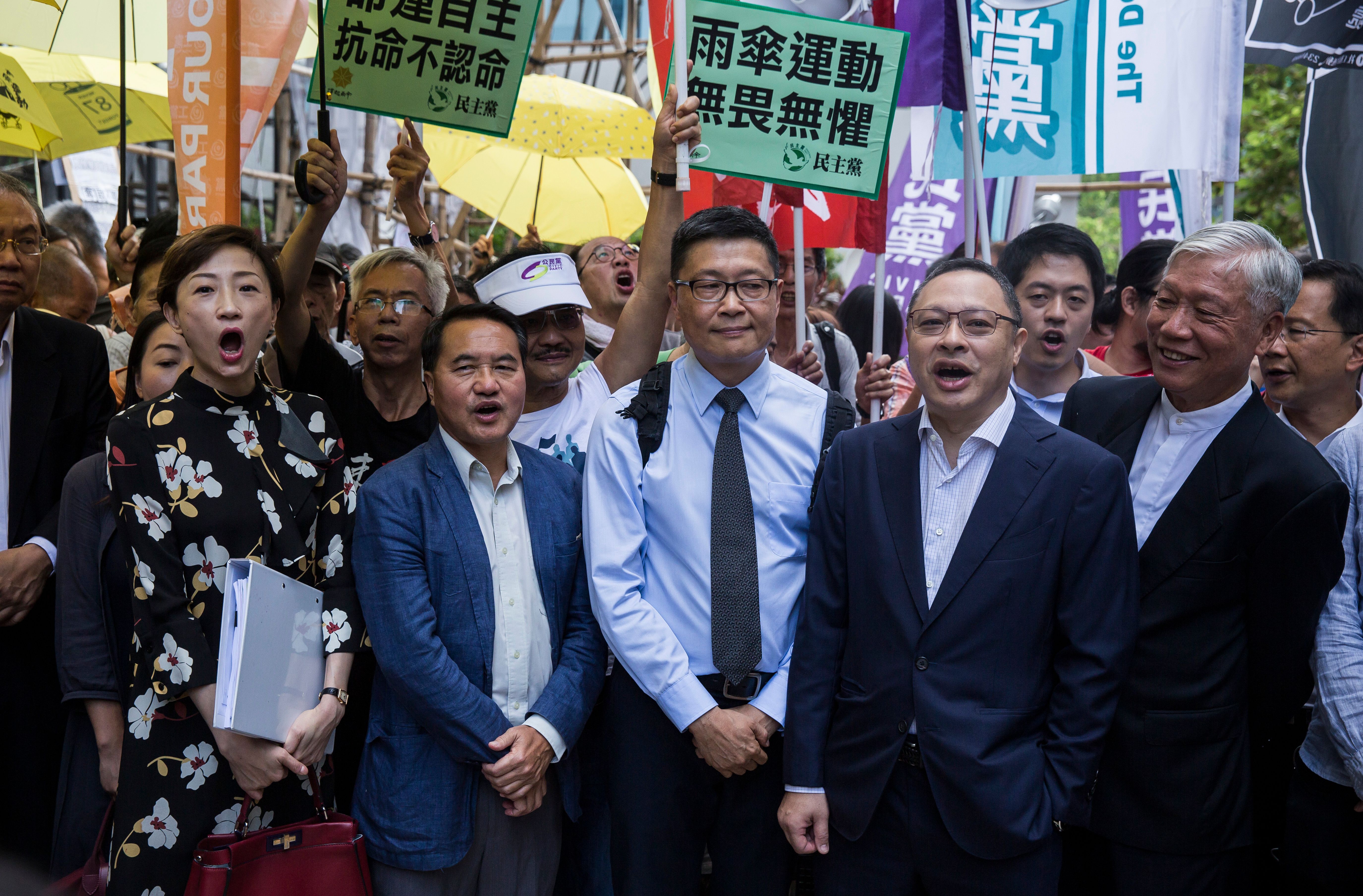 (L to R) Tanya Chan, Lee Wing-tat, Chan Kin-mam, Benny Tai and Chu Yiu-ming chant slogans in front of the District Court before the trial on public nuisance charges of some of the leaders of the “Umbrella Movement” rallies in 2014 calling for democratic reforms in Hong Kong on Sept. 19, 2017. (ISAAC LAWRENCE/AFP/Getty Images)

Chu said he and his fellow ministers strive for democracy because of those beliefs.

“This is our conviction based on the faith we hold: Every person is created according to God’s image,” Chu said, adding:

As such, every person should be respected and safeguarded. We strive for democracy, because democracy strives for freedom, equality and universal love. Political freedom is more than loyalty to the state. It professes human dignity. Every single person living in a community possesses unique potentials and powers, capable of making a contribution to society. Human right is a God-given gift, never to be arbitrarily taken away by any political regime.

Maya Wang, China researcher for Human Rights Watch, also denounced the guilty verdicts as a “slap in the face” to the people of Hong Kong.

“It’s a slap in the face for the hundreds of thousands of people who went on the streets to protest peacefully for the government to fulfill its promises to bring democracy to Hong Kong,” Wang said according to Los Angeles Times.

Sentencing for Chu and the others is scheduled for April 24. Two Occupy Central co-founders, Benny Tai and Chan Kin-man, asked that the court spare Chu any jail time. Chu, for his part, faced his verdict with unflinching support for the faith and principles by which he has led his life.

“We have no regrets. We hold no grudges, no anger, no grievances. We do not give up,” Chu concluded. “In the words of Jesus, ‘Happy are those who are persecuted because they do what God requires; The Kingdom of heaven belongs to them!'”