“So fuck on! Yes! We’ve earned our right to sexual pleasure.”

— Alyssa Milano, the actress and Democratic activist who called for a sex strike for a woman’s right to being pro-choice.

Ivanka is a good sport when bombarded by strangers with cameras

In a weekend story about VIP dining in Washingtonian, food writer Jessica Sidman writes about the time that Ivanka Trump and husband Jared Kushner went to Masseria.

“One night early in the Trump administration when Ivanka Trump and Jared Kushner dined at Masseria, Trump got up to use the restroom and some other women in the dining room followed her, a former employee says: ‘These women got out their phones and were holding them in front of them, waiting for the door to open to take a photo of her. She walks out of the bathroom and immediately there’s flashes. They didn’t even turn their f—ing flash off.’ The staff was just about to swoop in and extract Trump from the situation, but she put up her palm to stop the intervention. She then did a curtsy for the women, threw her arm around one for a couple of selfies, and walked back to her table as if it were no big deal.”

TV Note: Abby Huntsman is on maternity leave. On Monday, Ana Navarro filled in for her on ABC’s “The View.” Navarro cracked, “It feels like I’m carrying twins.” Whoopi Goldberg agreed, saying, “We all do.”

Confessionals: Both Navarro and co-host Joy Behar admitted on the show Monday that they’ve had painful ectopic pregnancies.

Is it bizarre to think that a political editor for a national women’s mag should be unbiased?

Jennifer Wright is clearly in the tank for Sen. Kamala Harris (R-Fla.) for president. She flat out loves Harris, detests President Trump, who she refers to as a misogynist, and thinks Pete Buttigieg is too inexperienced for theWhite House. Oh, and she appreciates the adoring way that presidential hopeful Sen. Cory Booker (D-N.J.) looks at Harris when she is questioning AG William Barr. Booker, too, is a good sideshow, but not the main act.

A quick scan of Wright’s Twitter feed also contains a bunch of anti-male sentiments. She supports men getting vasectomies.

Journo wants to change his diet from cheeseburgers to tacos

Side note: I don’t know if there is such a thing as a beard wig, but this beard is the most spectacular facial hair I’ve seen in awhile. 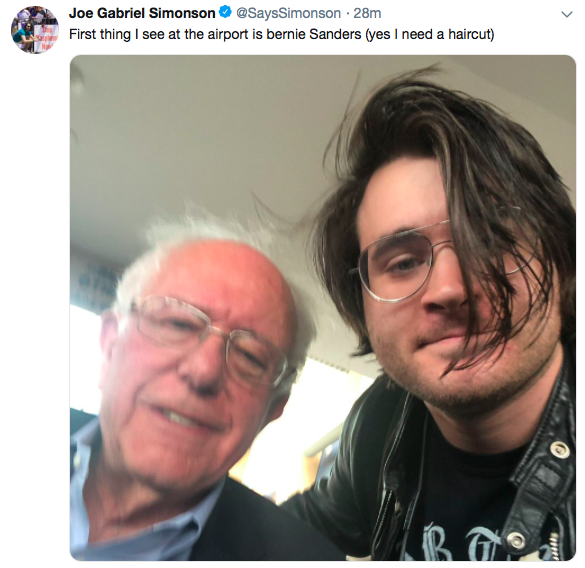 Another note on hair…

“I was getting a passport picture taken and I asked the RiteAid lady how my hair looked and she said ‘it’s fine’ and I’ve never heard a more devastating burn.” — Dana Schwartz, author, correspondent, Entertainment Weekly.

Navarro makes fun of Trump’s orange skin hue: “Does he have a mirror? Should somebody whose skin tone ranges between Cheeto and pumpkin depending on the lighting and who has the tail of a squirrel on top of his head be calling names at Pete Buttiegieg and every other candidate?” — Navarro on Monday’s “The View.”

“Fmr. Pres. Jimmy Carter underwent hip surgery after fall while turkey hunting, per the Carter Center.”  — Jesse Rodriguez, director of booking, MSNBC. Former President Jimmy Carter is 94-years-old. Per the statement from The Carter Center: “His main concern is that turkey season ends this week, and he has not reached his limit. He hopes the State of Georgia will allow him to rollover the unused limit to next year.”

Weiner’s out of the halfway house! (RELATED: Weiner Stands Erect As He Makes His Way To A New Life Chapter)

The couple — MSNBC’s Nicolle Wallace and NYT‘s Michael Schmidt — has announced their relationship to MSNBC.

“’I’m human, and we all make mistakes, and it was just a doozy,’ Valerie Plame said, apologizing for posting an article in 2017 with anti-Semitic content.” — Kasie Hunt,
MSNBC.

Monica Lewinsky’s favorite breakfast cereal of all time is…

“Cornflakes w/ half n half OR soggy fruit loops. (obviously).”

Who made the new list of Top 10 Journalist Appearances on a C-SPAN Call-in program?
Take a look: https://t.co/rHoxwNv8Ck