A Kenyan man accused of 12 murders while living in the United States illegally also had been arrested four times for less serious crimes, according to Dallas County, Texas, records.

While immigration authorities have placed a hold on Billy Chemirmir, a Kenyan citizen, now that he has been arrested on charges of capital murder, the 46-year-old’s previous brushes with the law leave questions as to why such a move wasn’t made much sooner.

U.S. Immigration and Customs Enforcement (ICE) told The Daily Caller that an immigration detainer for Chemirmir was filed with Dallas County Jail in March 2018, but that he’s not currently in the agency’s custody.

Chemirmir had already been charged with capital murder in March 2018 in the death of 81-year-old Lu Thi Harris, but was indicted on Tuesday for 11 other deaths: five in Collin County and six more in Dallas County. Court records show that Chemirmir allegedly smothered his victims with a pillow and then robbed them, The Dallas Morning News reported.

The former health care worker’s extensive criminal history in North Texas prior to his March 2018 arrest includes 180 days in jail and a fine of $1,250 in June 2011 for driving while intoxicated in Addison, as well as 70 days in jail for another DWI charge in Dallas several months later. 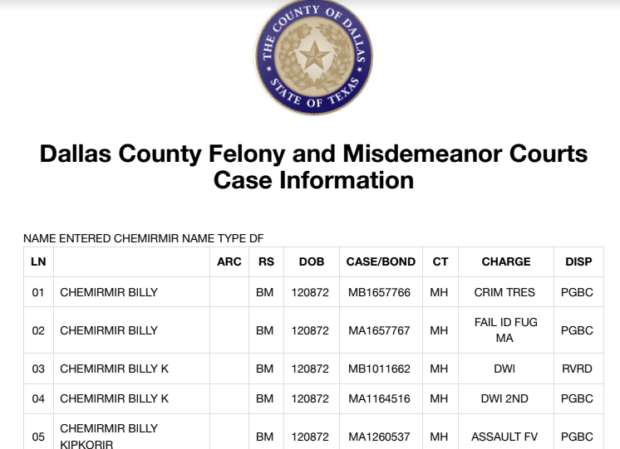 Records also include a 2012 arrest for domestic assault, and a 2016 arrest for criminal trespass and failing to identify himself. (RELATED: Illegal Alien From Kenya Charged With Killing 12 Elderly Women, CNN Still Ignoring Story)

The Star Telegram reported the details on the 2012 incident:

Chemirmir’s girlfriend told Dallas police he had come home drunk from a strip club and the two argued. She later went to bed and tried to go to sleep, but Chemirmir came into the room and began punching her, according to an arrest warrant obtained by the Fort Worth Star-Telegram on Thursday.

Chemirmir stopped the assault, but he started cutting a couch with a knife, according to the warrant. His girlfriend called 911 and he was later arrested.

Chemirmir posted bail, and waited for years for his trial on the assault.

Prior to being tried on the 2012 assault charge, Chemirmir was arrested in June 2016 on charges of criminal trespass and failing to identify himself after unlawfully entering Dallas’ Edgemere Retirement Community, where it was later reported one of his alleged victims lived.

Texas passed a hotly contested law in 2017 banning sanctuary cities in the state. Even though San Antonio, Houston and Dallas sued to prevent the law’s enforcement, it was eventually upheld by an appeals court in 2018. Prior to the law’s passage, several of the state’s largest cities had previously practiced “sanctuary city” policies, which included failing to notify ICE of illegal immigrant arrests.

It’s unclear whether such policies directly led to Chemirmir not being reported to immigration authorities.

The Daily Caller has reached out to the Dallas Police Department for comment.