The Trump administration is withholding over $9 million in wildfire assistance to California after a financial audit suggested the state was overbilling the U.S. Forest Service for costs incurred fighting fires on federal lands, officials said.

The California Governor’s Office of Emergency Services (Cal OES) said the withheld funds from the original $72 million reimbursement request are owed to local fire departments for costs incurred during the 2018 wildfire season, which took the lives of at least 85 people. The Forest Service said it needs to see the receipts before disbursing any more funds under the California Fire Assistance Agreement (CFAA).

“The audit found that the current CFAA does not result in reimbursement of actual expenses to local fire departments,” the Forest Service said in a statement Wednesday to the Los Angeles Times. “Our intentions are to fully reimburse the State of California for all of their actual expenses. The only payments that we have not made are those that do not have documentation that substantiate actual expenses.”

The Cal OES said the federal government is unfairly changing the terms of the CFAA at the tail-end of the five-year agreement set to expire in 2020. Under the original terms of the agreement, the state would submit the average personnel costs incurred by the thousands of firefighters fighting wildfires on federal lands each year, but now the Forest Service is requesting a line-item tabulation of salary, travel and other expenses incurred by each firefighter.

President Donald Trump said in November 2018 that California’s “gross mismanagement of the forests” was the cause of 2018’s deadly wildfire season, and threatened to withhold federal assistance if changes weren’t made.

There is no reason for these massive, deadly and costly forest fires in California except that forest management is so poor. Billions of dollars are given each year, with so many lives lost, all because of gross mismanagement of the forests. Remedy now, or no more Fed payments!

Cal OES Fire Chief Brian Marshall said in a letter to the Forest Service that its requirements “would be cumbersome and would severely impact California’s ability to respond to fires,” especially for smaller fire departments heavily reliant on volunteers. 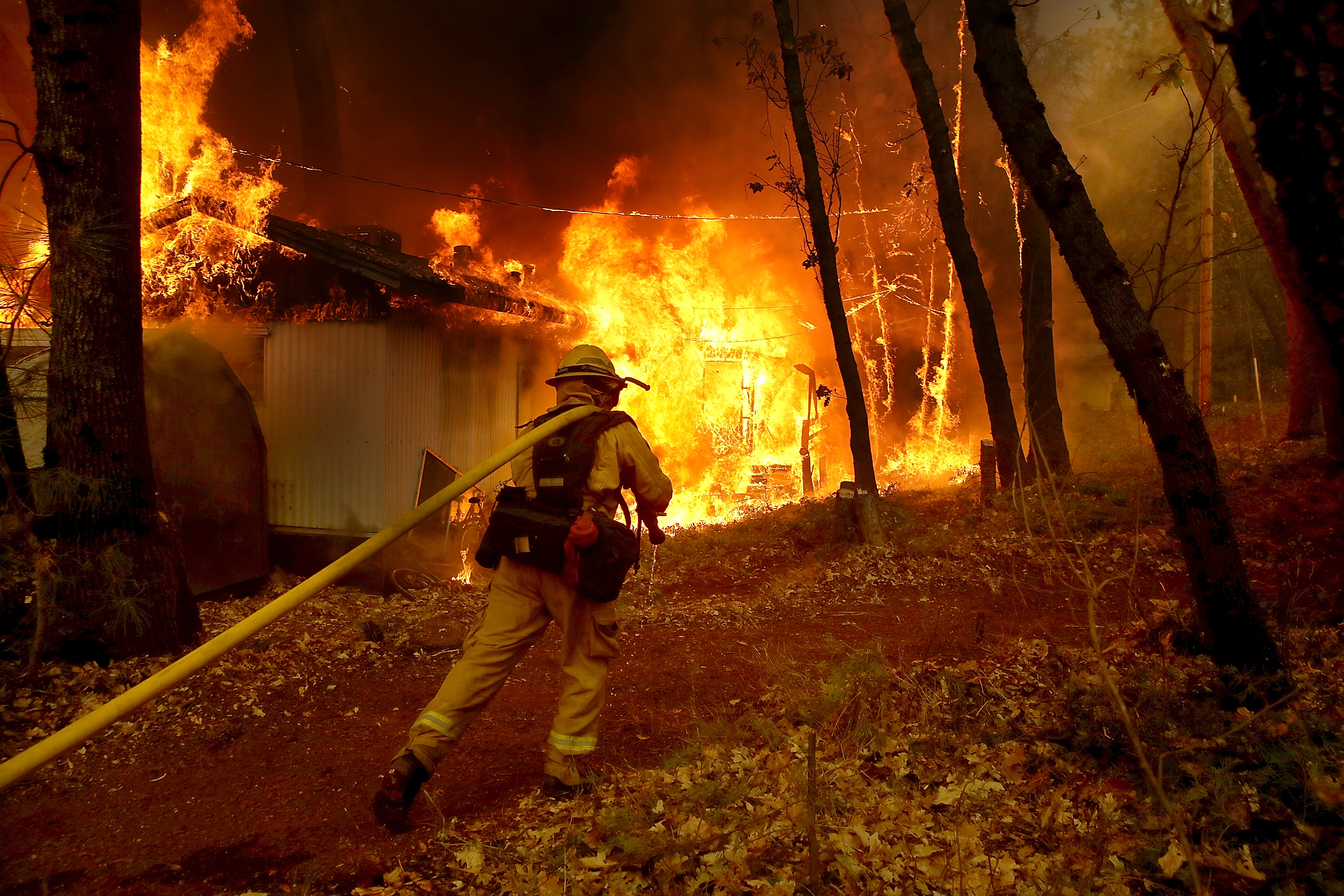 A Cal Fire firefighter pulls a hose towards a burning home. (Photo by Justin Sullivan/Getty Images)

Marshall said he was only briefed on portions of the audit’s findings, and accused the federal government of withholding its full results.

“It wasn’t a typical audit that you see from the government. It was a PowerPoint; it wasn’t an audit. They said ‘overcharging.’ But they also said ‘undercharging,'” Marshall told the Times. “They won’t tell us if they’re going to be able to pay our volunteers or not.”

Democratic Sen. Dianne Feinstein of California urged the Department of Agriculture and Forest Service in a May 14 letter to delay the implementation of the audit findings until renegotiations of the CFAA at the end of 2019.

“As you know, around 60 percent of forested land in California is owned by the federal government,” Feinstein said. “Wildfires don’t stop at jurisdictional boundaries, so a unified federal-state approach is the only way to properly protect lives and property … Given increased wildfire risks in recent years, I do not believe that any action should be taken to jeopardize that partnership.”

But the Forest Service insists it will not relent on its new reporting requirements.

“The Forest Service is ultimately accountable to American taxpayers and has the responsibility to practice due diligence in review of all fire-related claims made by local governments,” the service told McClatchy on Monday. “The audit found several areas where the CFAA is not being managed to ensure mutual benefit between the Forest Service and the State of California.”

The Forest Service did not immediately respond to a request for comment.