The Al Jazeera news network and its AJ+ subsidiary have a long history of anti-Semitism.

The network, which pushes Islamic rhetoric in Arabic but has wrapped itself in progressive liberalism in English, is controlled by the royal family of Qatar.

That anti-Semitic history came into renewed focus on May 18, when AJ+ Arabic posted a seven-minute video to social media with the caption “The gas chambers killed millions of Jews … So the story says. How true is the #Holocaust and how did the Zionists benefit from it?”

“People are divided between those who deny the annihilation, others who think that the outcome was exaggerated, and others yet who accuse the Zionist movement of blowing it out of proportion,” it said.

After the Middle Eastern Media Research Institute (MEMRI) translated the video from Arabic and called attention to what it said, Al Jazeera put out a statement saying “the video was produced without the due oversight.” The network said that two employees would be disciplined.

Over the years, however, anti-Semitism, both overt and veiled, has been a recurring theme on the network on the air and behind the scenes. Here are some examples:

“Allah has imposed upon the [Jews] people who would punish them for their corruption. The last punishment was carried out by Hitler. By means of all the things he did to them – even though they exaggerated this issue – he managed to put them in their place. This was divine punishment for them. Allah willing, the next time will be at the hand of the believers. … I will shoot Allah’s enemies, the Jews, and they will throw a bomb at me, and thus, I will seal my life with martyrdom. Praise be to Allah, Lord of the Worlds. Allah’s mercy and blessings upon you.”

Had a party for a terrorist

In 2008, the network held an on-air party for Palestinian Liberation Front terrorist Samir Kuntar after he got out of prison for murdering a 4-year old Jewish girl. Al Jazeera’s Beirut bureau chief called him a “Pan-Arab hero.”

In 2002, Al Jazeera interviewed former Klu Klux Klan official David Duke, and both Duke and the Al Jazeera journalist pinned 9/11 on the Israelis, as the Middle East Forum noted.

Secretly infiltrated AIPAC to make a film that neo-Nazis love

In 2017, Al Jazeera English sent undercover journalists to infiltrate Jewish advocacy organizations, and produced a documentary series called “The Lobby.” Under pressure, Al Jazeera’s ownership promised not to air it in America — but the tapes mysteriously wound up in the hands of neo-Nazi website the Daily Stormer, the Middle East Forum reported.

In February 2006, Al Jazeera aired Qatari University Lecturer Ali Muhi Al-Din Al-Qardaghi blaming a Muhammad cartoon on a Jewish conspiracy: “A survey conducted some time ago in Europe showed that 67% of the Europeans hate the Jews. The Jewish leaders convened to decide what to do. They wanted to divert this hatred to the Muslims. This is a Crusader Zionist campaign, which is led by the extremist pro-Zionist right, headed by George Bush in America.” (RELATED: Wilders Announces ‘Draw Muhammad’ Contest During Ramadan)

In 2012, Marah M. Elwadia, whose Twitter profile described her as a “blogger and engager at @ajplusarabi,” tweeted in Arabic: “Adolph Hitler: ‘I could burn all the Jews of the world but I left the rest to teach the world why I burned them.” She added the English hashtag #FuckJews. 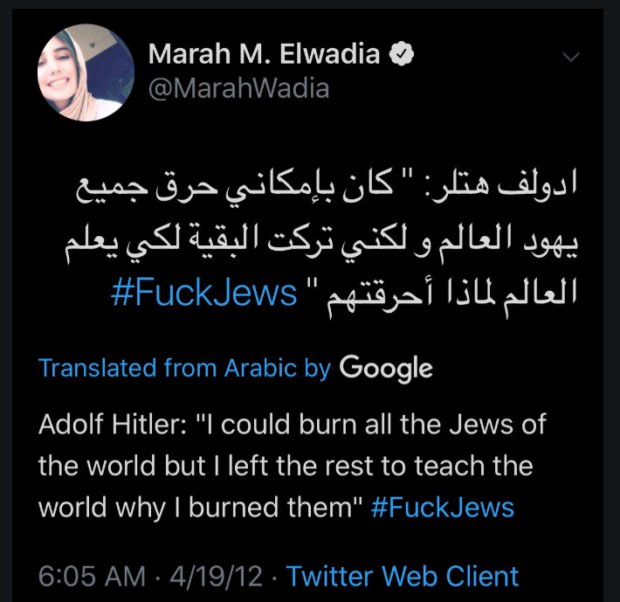 In August 2017, Al Jazeera aired a Lebanese writer saying “There is a Jewish Zionist lobby that influences the film industry in Hollywood with a tradition of producing films that distort the image of the Arabs, who are always presented as deceitful, terrorist, murderous sheikhs.” 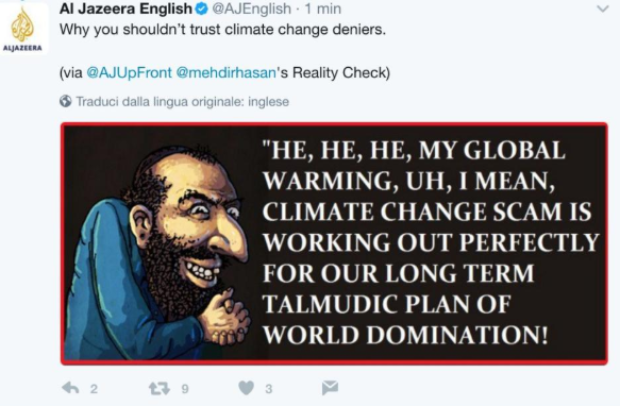