The Qatar-funded Al Jazeera news network published a video questioning the Holocaust and implying that Jews have benefited from it.

On May 18, AJ+ Arabic posted a seven-minute video to social media with the caption “The gas chambers killed millions of Jews … So the story says. How true is the #Holocaust and how did the Zionists benefit from it?” The Jews “exploited the Holocaust for their agenda and made the whole world focus on their murders and forget the other victims.”

For those that missed it, @ajplusarabi produced a video in Arabic straight up denying the Holocaust and claiming the Zionists were complicit.

Same people that make those cutesy progressive videos you all share. @AJEnglish and @ajplus.

The Middle East Media Research Institute (MEMRI), a nonpartisan nonprofit that says it “bridges the language gap which exists between the West and the Middle East, providing timely translations,” added captions and tweeted a translated version of the clip.

On May 19, Al Jazeera issued a statement saying that “Dr. Yaser Bishr, Executive Director of Digital Division, stated that Al Jazeera completely disowns the offensive content in question and reiterated that Al Jazeera would not tolerate such material on any of the Network’s platforms. In an email to staff he also called for the mandatory bias training and awareness program.” It said two journalists would be disciplined.

Despite the apology, Al Jazeera was apparently trying to keep westerners from finding out the contents of the video it published — with an assist by Twitter. The social media platform subsequently blocked MEMRI’s videos, without which there would have been no apology, displaying only a grey box that says that “the media has been disabled in response to a report by the copyright owner.” 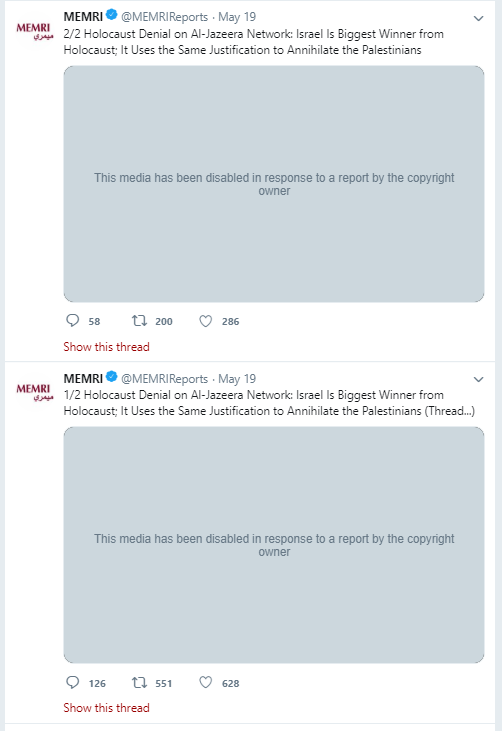 Additionally, Daily Wire journalist Ryan Saavedra posted a screenshot showing that his entire tweet was removed, including his commentary, to which no copyright would apply. The extent of the censorship was somewhat hidden from him since when he was logged into his Twitter account and looked at his own tweets, his commentary was visible.

MEMRI’s entire body of work consists of similarly translated Arabic news clips, which are routinely tweeted without being taken down.

The original Al Jazeera video reportedly received 1.1 million views on Facebook and Twitter without either social media giant taking it down due to violations of its policies. Twitter has hired groups to block speech from its platform that it deems Islamophobic content or fake news. It banned Laura Loomer, a conservative Jewish American, from its platform after she said Minnesota Democratic Rep. “Ilhan [Omar] is anti Jewish.”

Twitter spokeswoman Katie Rosborough told TheDCNF Tuesday afternoon she was looking into why the translated videos exposing anti-Semitism — but not the original anti-Semitic videos — were taken down and how the copyright claim was valid.

An independent political commentator who has closely tracked the Middle East, Nervana Mahmoud, tweeted that Al Jazeera “took down @ajplus ugly Arabic video. But that is NOT because the channel suddenly becomes less #antisemitic, but because it was caught.”

“The Qatari channel is run by a group of cowards who cannot even stand by its employees when exposed,” she continued. “Denying or downplaying the #Holocaust is not new. It has been a recurring theme by AJ arabic since its establishment.” (RELATED: Top Al Jazeera Host Says Hitler Was ‘Divine Punishment’ For Jews)

Al Jazeera is owned by the royal family of Qatar, a tiny nation with massive oil money. Qatar has funded numerous institutions in the U.S. and exerted aggressive legal pressure to keep details under wraps. It did not return a request for comment, including a question about how suppressing critics squares with its apology.

MEMRI is the same group that noticed that a Philadelphia Muslim group was having children chant about chopping off the heads of their enemies.