Federal regulation of big tech companies was a bipartisan issue in the 1990s when the internet was still in its infancy and the United States sued Microsoft for unlawful monopolization.

In recent years, as conservatives have increasingly found themselves on the wrong side of censorship by big tech platforms, the issue has found a new home on the political right, with politicians like Missouri Republican Sen. Josh Hawley taking the lead on right-wing efforts to rein in tech companies.

But not all conservatives are on board for the fight with big tech. Some conservative groups and thinkers remain resolutely opposed to a federal role in maintaining free speech on tech platforms, despite big tech’s pattern of hostility to popular conservatives online.

“[Tech companies] need rules for content that honor the spirit of the First Amendment, and perhaps there should be tighter regulations around privacy,” Lowry wrote. “But any real offenses should be addressed with fixes directed at specific conduct, rather than with a massive politically imposed reorganization.”

Similarly, the American Action Forum, Cato Institute and International Center for Law & Economics, which all accept Google money, have been critical of big tech regulations.

AAF Director of Technology and Innovation Policy Will Rinehart argues that Elizabeth Warren’s pledge to break up big tech would lead to “chaos,” and that “changes would be radical,” decreasing entrepreneurship and competition among companies.

Resistance to regulating big tech has even come from parts of the conservative media that have been victims of big tech censorship themselves. Liftable Media, a digital media company that owns the news website Western Journal and Conservative Tribune, which was blacklisted by Google, organized a “Big Tech vs. Free Speech” conference in Washington, D.C., on May 14. Most of the speakers seemed to be resistant to the idea of a federal role in reining in big tech.

The conference included discussions featuring a broad range of conservative panelists, from former presidential candidate and Western Journal show host Herman Cain, to political provocateur Laura Loomer, to Todd Cefaratti, chief strategist of the America Fighting Back PAC. All of whom agreed that a) adding regulations to big tech is a bad idea and b) letting the free market take control of big tech is a good idea. 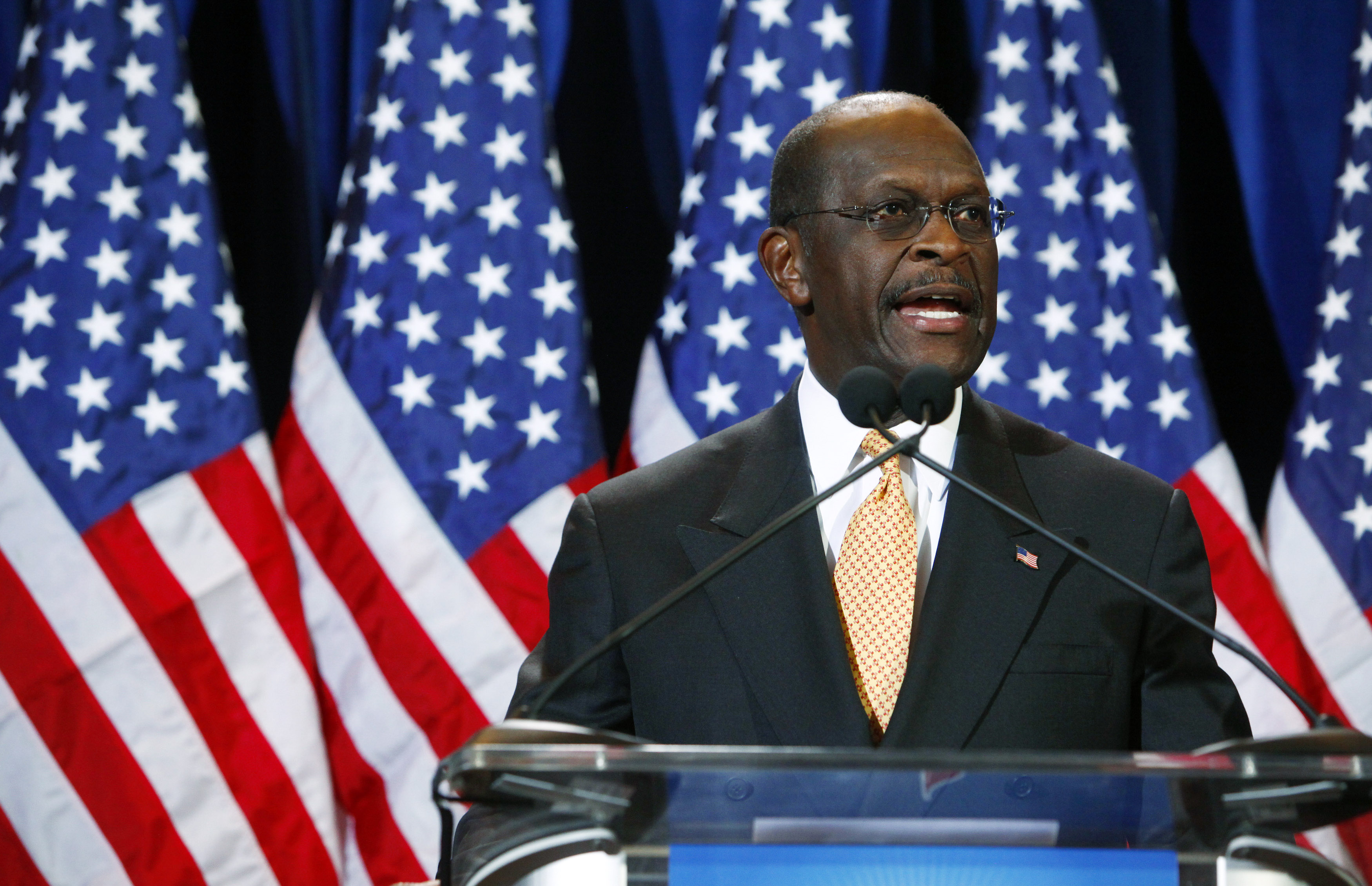 Cain explained that traffic for Western Journal “decreased 80%” over a year as a result of Google censorship.

Despite his own personal experience being censored by tech giants, Cain suggested that regulation is not the key to limiting the power big tech has over ordinary people; instead, social media users need a clear set of definitions for words like “bias,” “hate speech” and “censorship” so they can defend themselves when they are banned for reasons including those terms.

“How do we define bias, hate speech, censorship? If they don’t know, we don’t know,” Cain said. “Start with doing an assessment of how people define these critical terms. …We can’t wait for change from the big guys. We have to start from the bottom up.”

When Republican Nevada Sen. Ben Sasse asked Mark Zuckerberg how to define hate speech during the Facebook founder’s 2018 Senate hearing, he replied, “Senator, I think this is a really hard question, and I think it’s one of the reasons why we struggle with it. There are certain definitions that we have around calling for violence — ” (RELATED: Zuck Says He Wants To Ban ‘Hate Speech’ — Sasse Asks What That Means For Pro-Lifers)

Facebook CEO Mark Zuckerberg arrives to testify before a joint hearing of the US Senate Commerce, Science and Transportation Committee and Senate Judiciary Committee on Capitol Hill. (BRENDAN SMIALOWSKI/AFP/Getty Images)

“Let’s just agree on that,” Sasse said. “If somebody’s calling for violence, that shouldn’t be there. I’m worried about the psychological categories around speech. You used language of ‘safety’ and ‘protection’ earlier. We see this happening on college campuses all across the country. It’s dangerous. Forty percent of pollsters under 35 tell pollsters they think the first amendment is dangerous.”

At a different point during Zuckerberg’s congressional hearings, however, he told senators that “determining if something is hate speech is very linguistically nuanced. You need to understand what is a slur and what — whether something is hateful.”

Cain went on to explain why he believes adding federal regulations to big tech wouldn’t work: “I don’t think Congress needs to start any more regulations. I don’t think the answer is just breaking it up, because then you’ll have 10 [tech companies] when you had one of them.”

Many conservatives and libertarians who are opponents of federal regulations, in general, see internet regulations as no exception and have been staunch opponents of President Barack Obama’s Net Neutrality plan.

Tactics for enforcing such a plan, however, sparked debate among politicians. Texas Sen. Ted Cruz called it “Obamacare for the internet.” Kentucky Sen. Rand Paul has called it a “direct attack on the freedom of information.” Florida Gov. Jeb Bush called it “one of the craziest ideas I’ve ever heard.”

As The Daily Caller previously reported:

Critics of the net neutrality rules, and thus proponents of the FCC’s decision to repeal the mandate, are generally supportive of a neutral internet, just not in its present state under the Title II category. The onus to police the industry from engaging in anti-competitive behavior has fallen on the Federal Trade Commission (FTC) for years (along with the Department of Justice’s own oversight). The FCC’s repeal plans to restore jurisdictional authority to the FTC.

When the Obama-era FCC implemented Title II of 1934 on the internet in 2015, broadband network investment dropped more than 5.6%, which hurt small internet service providers. Title II requires “every common carrier engaged … by wire or radio to furnish such communication service upon reasonable request therefor.”

In 2017, under President Donald Trump, the FCC repealed the regulations. Since then, broadband investments have increased and internet speeds have improved significantly. (RELATED: It’s Been More Than A Year Since Trump Dinged Net Neutrality. Here’s How The Internet Is Doing Now) 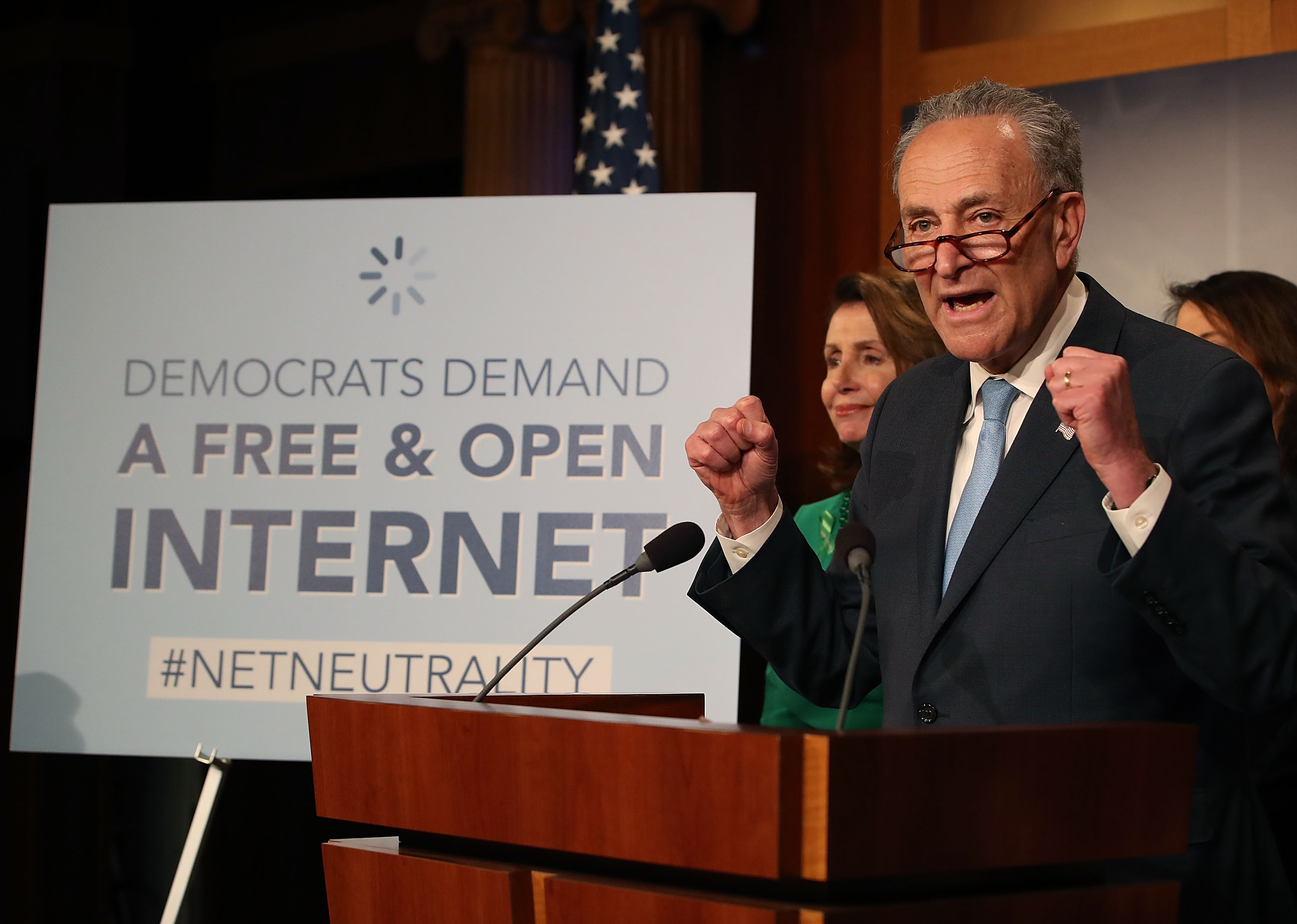 Senate Majority Leader Charles Schumer (D-NY) speaks at a press conference at the Capitol Building on May 16, 2018 in Washington, DC … (Photo by Mark Wilson/Getty Images)

Cain’s preferred solution to a free and open internet besides creating an official list of definitions, he said, would be to “use the free market, along with litigation, using existing laws to force some of this change.”

Todd Cerafetti, author “Tech Tyrants” and chief strategist of America Fighting Back PAC, made the same argument, saying that attempting to get Congress to regulate big tech “is not the right move” and “we need to let the free market take over.”

He also argued that legislators should instead make changes to existing laws such as Section 230 of the Communications Decency Act, which reads, “No provider or user of an interactive computer service shall be treated as the publisher or speaker of any information provided by another information content provider.”

This clause helps providers of interactive computer services who publish information created by its users to avoid liability. Cerafetti argues that there should be a more distinct line between publishers and platforms.

Similarly, Digital Director for the Republican National Committee Jesse Kamzol said social media users have to decide between being a platform or a publisher because remaining undecided and acting on one’s own accord “would lead to a lot of lawsuits.”

Dan Gainor, the Media Research Center’s vice president of business and culture, agreed that responsibility is in the hands of big tech and big tech only, saying they have to “do it themselves.” Gainor also made the argument that Facebook, Google and Twitter “don’t have any algorithmic transparency,” which is something that these companies need to make a priority for consumers.

Loomer, who started her comments with, “I am the most censored person in America,” and says she has lost “90%” of her income after being banned on Twitter, Facebook, Venmo, GoFundMe and other websites, did not say where she stands on the idea of regulations but did agree that “laws need to be updated.”

As the fight between conservatives and big tech heats up, the most remarkable thing about it may be the restraint of conservatives. While their commitment to free-market principles may be admirable, conservatives’ unwillingness to find common ground with left-wing anti-monopolists and use the levers of power to regulate them means, at least in the short term, that the censorship is likely to continue.

1
Joe Biden Said To Believe Women Who Say They're Sexual Assault Victims. Now He's Denying A Woman's Sexual Assault Accusation
Politics
2
Billionaire David Geffen Gets Hefty Dose Of Social Media Backlash After Posting Pictures Of Self Quarantine Superyacht
US
3
Tucker Carlson Insists Biden 'Will Not Be The Democratic Nominee.' Here's Who He Predicts Will Assume The Mantle
Media
4
Here's Why Californians Are Getting Reamed At The Gas Pump Despite Rock-Bottom Oil Prices
Energy
5
China Was Lauded As New 'Global Leader' For Distributing Medical Equipment To Fight Coronavirus, But Most Of That Equipment Is Reportedly Defective
World