The New Jersey Department of Education is looking into a dispute between a 16-year-old art student and the Catholic church that rents space to her charter school over a mural she painted with LBGTQ imagery.

The student said she was “heartbroken” that the church and landlord told the school to cover up her mural on the campus of the Bergen Arts and Science Charter School in Hackensack, New Jersey, reported the North Jersey Record.

Hackensack’s Holy Trinity Church rents the building to the charter school and uses the space, including the lunchroom where the mural was painted, for events. Parishioners told Rev. Paul Prevosto, pastor of the church, about the mural, which he described as “obscene,” according to the North Jersey Record. (RELATED: McConnell Introduces Bipartisan Bill Raising Smoking Age To 21)

“Simply stated the building is rented to [the charter school] and remains the property of the church. Many of the areas of the school are common areas used both by the School and the Church. We ask that these areas remain without anything contrary to the Catholic faith. The art displayed was a copy of Keith Haring’s. His art is known for its homosexual agenda and often pornographic imagery and anti-Christian themes,” Prevosto told The Daily Caller News Foundation in an email. 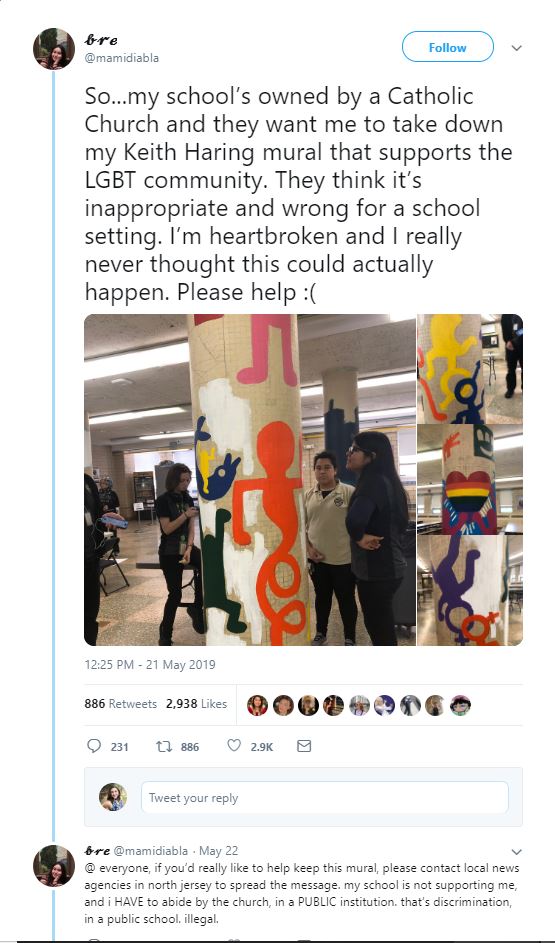 A New Jersey high school student is upset her mural with LBGTQ themes is being covered up. Twitter screenshot

The student took to social media to voice her opinion on what she saw as “discrimination, in a public school.”

“So … my school’s owned by a Catholic Church and they want me to take down my Keith Haring mural that supports the LGBT community. They think it’s inappropriate and wrong for a school setting. I’m heartbroken and I really never thought this could actually happen. Please help :(,” she wrote Tuesday.

“[At] everyone, if you’d really like to help keep this mural, please contact local news agencies in north [J]ersey to spread the message,” she added.

The charter school sent a statement to TheDCNF that read in part:

For the past eight years, Bergen Arts and Science Charter High School has successfully navigated the relationship between operating as a secular, public charter school and complying with lease requirements as outlined by Holy Trinity Church. Facilities arrangements such as this are not unusual in New Jersey, as public charter schools in the state are not provided funding for facilities, nor are they provided buildings for occupancy like their traditional public school counterparts. … The school administration received a directive from the church to remove this specific artwork, which was painted on a column in the cafeteria, and the school complied with that directive. This action was not intended to discourage the student’s expression; in fact, other aspects of the class project are continuing, including further reflection on the work of the artist that this display was intended to represent.

Part of the lease agreement between the school and church reads: “Due to the Catholic nature of the Landlord, Tenant promises to conduct no affairs or establish any organizations that would be contrary to its Catholic moral values, ethics and faith.”

The group that operates the charter school, iLearn Schools, Inc., issued the following statement according to the North Jersey Record:

As a public school, we are inclusive, supportive, and respectful of the artistic expression of our students, and likewise are respectful of the directives of the church as a private entity and owners of the property.

The Archdiocese of Newark, which Holy Trinity Church is a member of, said Wednesday that it was also looking into the matter.

“We’ve not had the opportunity to make any determination as to what occurred. We hope to have a better understanding, once further information is made available to us,” the archdiocese said in a statement according to the newspaper.

The mural disagreement is the latest situation that puts LGBTQ and religious forces at odds in an educational setting. A Catholic girls’ high school in Washington, D.C., announced earlier in May that it will feature same-sex unions in its alumnae magazine, to the disappointment of diocesan leadership.

The archdiocese, New Jersey Department of Education and student painter did not immediately respond to TheDCNF’s requests for comment. More than 1,000 Catholics signed a petition in March asking a local Catholic school to reconsider its acceptance policy on children of same-sex couples after such a student was declined admittance.