White Americans have become less racist since President Trump took office, according to a study of racial prejudice that spans the Obama administration and the beginning of Trump’s presidency.

University of Pennsylvania researchers first surveyed a group of 20,000 white Americans on racial bias in 2007, then followed up with a subset of them eight times over the course of about 12 years, most recently in November 2018. Their prejudice was assessed based on the credence they gave to racial stereotypes. Researchers hypothesized that Trump’s race rhetoric would show an increase in prejudice, but the results actually showed a marked decline compared to the Obama years. 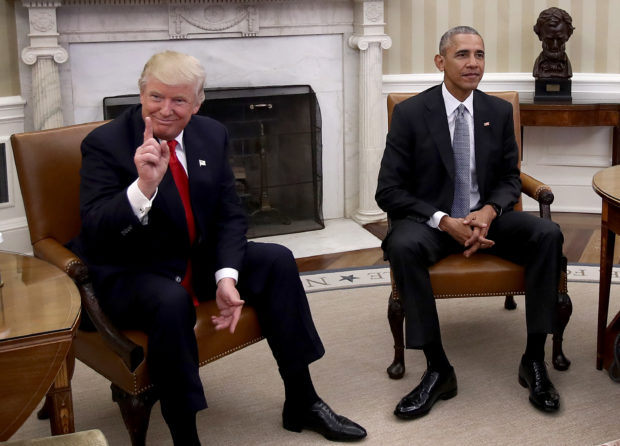 President-elect Donald Trump (L) talks after a meeting with U.S. President Barack Obama (R) in the Oval Office November 10, 2016 in Washington, DC. Trump is scheduled to meet with members of the Republican leadership in Congress later today on Capitol Hill. (Win McNamee/Getty Images)

The researchers were surprised, but concluded Trump’s rhetoric has pushed the country away from racism. “It’s quite conceivable that Trump has simultaneously galvanized a small number of highly prejudiced white Americans while also pushing millions more to affirm that they are not as prejudiced,” the lead researcher, political scientist Daniel Hopkins, told The Washington Post. (RELATED: Here’s A List Of Hoax ‘Hate Crimes’ In The Trump Era)

The drop was evident in attitudes toward both black and Hispanic Americans. The drop in anti-black prejudice happened in both parties, and without respect to education, while the drop in prejudice toward Hispanics was driven by Democrats.

The respondents were asked to weigh in on race-related policies, such as whether black Americans should get special treatment from the government, and asked to place different races on various scales, including trustworthiness and work ethic, The Washington Post reports. Hopkins expected to find white Americans more comfortable expressing racist views, or supporting racist policies, but found neither to be the case. (RELATED: Buzzfeed Editor Accuses Trump Of Racism After He Tweets About Sri Lanka Attacks)

“Our findings contradict both hypotheses, as we primarily find declining prejudice and racial resentment, and certainly no increases,” the paper says according to The Washington Post.

The researchers noted that other factors may have contributed to the decline, such as a black man becoming president or a focus on racially charged police shootings, but concluded Trump’s presidency is the primary factor because of the pointed drop following his election.