House Speaker Nancy Pelosi is under fire from members of her own party for refusing to budge on the possibility of impeaching President Donald Trump.

It’s not just the grassroots of the Democratic party that is eager to impeach. Pelosi was reportedly grilled by members of her caucus during a closed-door meeting last week, over the possibility of impeachment. Firebrand Rep. Steve Cohen of Tennessee bemoaned that former President Bill Clinton was impeached “over sex,” and said that Trump should be impeached because he is “raping the country.”

Cohen is far from alone. Rep. Rashida Tlaib of Michigan has introduced an impeachment resolution, and told Chuck Todd on NBC’s Meet The Press Sunday that the majority of Democrats are “moving” toward impeachment.

Yet, despite the increased pressure, Democratic leadership has not been moved. Pelosi continues to urge a cautious approach, and her lieutenants — House Majority Leader Steny Hoyer and House Majority Whip James Clyburn — are largely toeing the party line. For now. (RELATED: Pelosi Condemns Trump’s 9/11 Tweet But Remains Silent On Omar’s Remarks)

“I think morally of course impeachment is the right thing to do,” liberal political commentator Jonathan Harris told The Daily Caller, but added that impeachment may be politically tenuous.

Recent polling backs up Harris’ contention. A Harvard CAPS/Harris Poll poll published last week showed that 2/3 of the American public were opposed to Democrats beginning impeachment proceedings, and that 58% of Americans are ready to move on from Democrats’ exhaustive investigations into Russian interference in the 2016 presidential election.

There’s also the matter of practicality when it comes to impeachment. Even if the House were to impeach Trump, the Republican-controlled U.S. Senate would not convict him, and history shows the ensuing backlash could make Trump’s road to re-election easier.

When Republicans moved to impeach Clinton in 1998, Clinton’s approval ratings went up, and Democrats gained seats in the House during the midterms that year. (RELATED: Bill Clinton Is Starting A Podcast Called ‘Why Am I Telling You This’)

Patillo warned of disastrous consequences should Democrats move to impeach, saying that it would ensure the president’s re-election.

“It would blow up the 2020 election and damage the party for the next two election cycles for the party,” he said.

It was the first time since 1934 that the incumbent president’s party gained seats in the midterm elections, which has served as a stark lesson ever since.

“There could be a massive boomerang effect,” Miller said.

Miller also said that he didn’t think the issue was helpful for 2020 Democratic candidates.

“Voters have already made up their mind,” Miller said. “Nobody is coming up on the campaign trail in Iowa and New Hampshire and asking the candidates about impeachment.”

If Pelosi were to successfully lead an impeachment charge against Trump, it would put the country in uncharted waters. The only two presidents to ever be impeached are Clinton and Andrew Johnson, and neither had to face voters again.

During Pelosi’s first stint as speaker, she faced similar pressure from her left flank to impeach President George W. Bush over the Iraq War, which Pelosi alluded to in March.

While many will assume Pelosi’s moves are the result of a steady political calculation, Harris contends that there is a deeper reverence that is preventing the 79-year-old speaker from going down the road of impeachment. 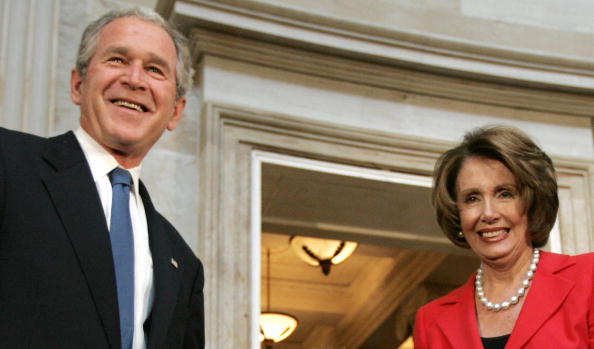 US President George W. Bush (L) stands alongside Speaker of the House Nancy Pelosi during a presentation of the Congressional Gold Medal to Dr. Michael DeBakey during a ceremony in the Rotunda of the US Capitol in Washington, DC, on April 23, 2008. (Photo credit : SAUL LOEB/AFP/Getty Images)

The circumstances of Pelosi’s current speakership are somewhat different than her first stint as speaker, when the Bush administration was in the White House. When Pelosi and the Democrats swept control of Congress in the 2006 midterm elections, they relied heavily on moderate Democrats from traditionally red districts, commonly known as “Blue-Dog Democrats.”

Today, Pelosi is tasked with managing a significantly more liberal caucus that came about through a divisive political environment that far exceeds anything Pelosi had to deal with roughly a dozen years ago.

Always the tactician, Pelosi has been willing to throw a bone to her fervently anti-Trump base, and her criticism of this president has been much more personal and intense than her opposition to Bush. (RELATED: Bush Admin Sold ‘American Taliban’ John Walker Lindh’s Plea Deal As A Win For America. Now He’s Free)

Pelosi has repeatedly stated that Trump is unfit for office, has accused him of conducting a “cover-up,” and recently urged the president’s family to hold an intervention with him.

“Again, I pray for the president of the United States,” Pelosi said last week.  “I wish that his family or his administration or his staff would have an intervention for the good of the country.”

The feud between America’s two most powerful people escalated when Trump tweeted a misleading video of Pelosi appearing to stammer during a speech.

Trump’s tweet drew a rebuke from Pelosi’s daughter Christine, who accused conservatives of doctoring videos in an effort to embarrass her mother.

“Republicans and their conservative allies have been pumping this despicable fake meme for years!” Christine Pelosi said on Twitter. “Now they are caught. #FactCheck: Madam Speaker doesn’t even drink alcohol!”

In the midst of the impeachment debate, can Pelosi and Trump repair their toxic relationship enough to get on with the nation’s business?

Both Trump and Pelosi have expressed interest in working together on issues such as trade and infrastructure, but any bipartisan deal seems far-fetched after the events of the last few weeks.

“Trump is not a legitimate president,” Harris said. “He undermines our values every single day.”

Harris said that he doesn’t believe bipartisanship is in the nation’s best interest.

“Is it more important to have infrastructure or to legitimize this president?” he asks.

As their feud escalates, Trump and Pelosi must be asking themselves similar questions every day.