The New York Times has banned its reporters from a number of TV shows deemed too partisan, including those hosted by MSNBC’s Rachel Maddow and Lawrence O’Donnell, and CNN’s Don Lemon.

MSNBC is upset about the new policy, unnamed sources told Vanity Fair, which was discovered after a New York Times reporter cancelled a scheduled appearance on Maddow’s show. Her producer was informed that New York Times reporters are asked not to appear on partisan shows to discuss politics. The ban reportedly extends to O’Donnell and Lemon, as well as Fox news hosts Tucker Carlson and Sean Hannity (where they were unlikely to appear anyways).

Vanity Fair’s headline on the report asks, “Is This A Liberal-Media War?” (RELATED: The NYT Justification For Killing The Public Editor Position Is Woefully Inadequate) 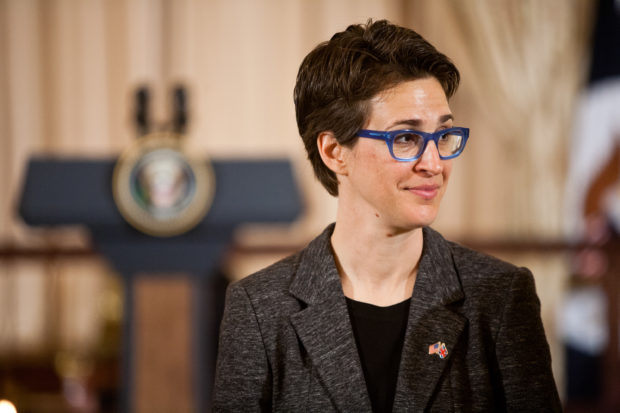 Television host Rachel Maddow arrives for a lunch hosted in honor of Prime Minister David Cameron at the State Department on March 14, 2012 in Washington, DC. Cameron is on an official visit to Washington, where President Obama will host him at a State Dinner tonight. (Brendan Hoffman/Getty Images)

TheNYT pointed Vanity Fair to an existing policy in the newsroom’s ethics handbook that says reporters should “avoid strident, theatrical forums that emphasize punditry and reckless opinion-mongering.” NYT reporters have appeared on Maddow’s show for years, but leadership at TheNYT reportedly thinks some of these shows have gone off the rails in recent months.

NYT Executive Editor Dean Baquet and others don’t want their reporters to be associated with the increasingly blatant bias of people like Maddow, sources told Vanity Fair. “Their view is that, intentionally or not, it affiliates the Times reporter with a bias,” one source said. (RELATED: Maddow’s Ratings Continue To Plummet)

It’s not clear where exactly TheNYT is drawing the line for shows that are and are not permissible. Some of their reporters, including White House correspondent Maggie Haberman, are paid contributors at the networks.

The guidelines are “inconsistent, incoherent and poorly conceived,” an unnamed source at one of the networks told Vanity Fair.

President Trump has made a point of jabbing the networks for obsessing over him to get good ratings. Maddow in particular has made a name for herself in the Trump era with wall to wall coverage of the Trump-Russia collusion conspiracy. Her ratings have been on a sharp decline in 2019, and dropped sharply after the Mueller report revealed there is no evidence Trump or his campaign colluded with Russia.