Erickson, a blogger at The Resurgent, was suspended for tweeting: “Elizabeth Warren set to introduce the Wrecking American Prosperity Under Marxism, or WAMPUM Act, wherein she gives everything away for free.” He received a notification Friday that the tweet violates Twitter’s “rules against hateful conduct.” The tweet has since been deleted. 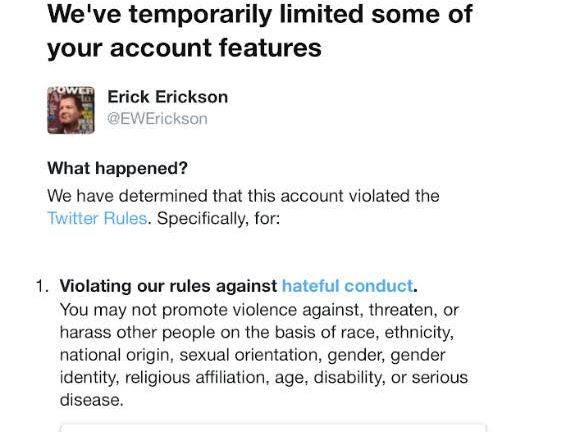 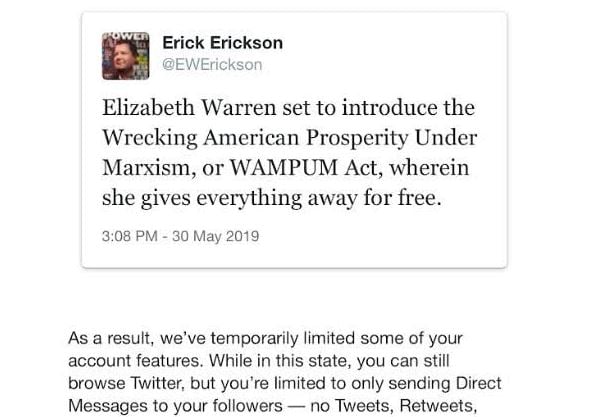 “I suspect it was an algorithmic ban, but algorithms written by progressives are more likely to consider conservatives problematic,” Erickson told The Daily Caller News Foundation in a text message. “Of all the things to ban for though. That’s just stupid.”

A Twitter representative confirmed that the company locked him out of his account, but did not provide further information explaining why his account was suspended. His 12-hour suspension started Friday morning .

Conservative content and jokes have gotten dinged recently under unusual circumstances. (RELATED: Twitter Restricts People Who Tweet ‘Learn To Code’ — Even If They Aren’t Engaging In Harassment)

Twitter locked Heritage Foundation Media Director Greg Scott out of his account on May 15 over a tweet he wrote criticizing male athletes who identify as women. He was told that his tweet noting the biological differences between the sexes violated Twitter rules against “hateful conduct,” and his account had been suspended.

Erickson’s suspension, for instance, comes roughly three months after Daily Caller editor in chief, Geoffrey Ingersoll, was locked out of his account in February for tweeting “learn to code” at The Daily Show account. Twitter admitted at the time that the tweet did not violate the rules and restored access to Ingersoll’s account shortly thereafter.