Activists around the U.K. have been protesting President Donald Trump’s visit with banners, tweets and even projections onto major landmarks in London.

The British activist group “Led By Donkeys” has been particularly active in posting projections onto Madame Tussaud’s, Big Ben and the Tower of London showing their distaste for Trump. They have even tweeted these projections to Trump.

They took a photo of the projection and tweeted it at Trump, saying it was “SAD!” that he was “wildly unpopular” in Britain.

Hi @realDonaldTrump. Just so you know, you’re wildly unpopular here in Britain. SAD! People REALLY don’t like you (though they love @BarackObama). Hope you like seeing your FAILING approval numbers projected onto the Tower of London. #TrumpUKvisit pic.twitter.com/oT332Fd6fE

The activist group also covered Big Ben with a video projection of an interview with Boris Johnson where he says that Trump is “clearly out of his mind.” They tweeted this to Trump as well.

Hey @realDonaldTrump, you just endorsed your Brexit buddy @BorisJohnson but he said some VERY NASTY things about you and he doesn’t want you to know. So we projected his words onto Big Ben. Watch with the SOUND ON #TrumpUKVisit pic.twitter.com/etUb6tk9eX

Trump has said Johnson would be a “good prime minister” for England and that he’s “got what it takes.”

“He obviously likes me, and says very good things about me,” Trump also said in 2018.

“Led By Donkeys” continued with a third projection “welcoming” the President to London. This one was a baseball cap with the USS John McCain ship on it, referencing to the incident during Trump’s 2019 Japan visit where a White House official asked the U.S. Navy to keep the USS John McCain “out of sight” because of Trump’s dislike for the late Arizona Republican Sen. John McCain.

Hey @realDonaldTrump, we read the story about the sailors on a US warship being ordered to hide from you because you’re triggered by the name on their hats. So we turned Madame Tussaud’s into a giant USS John McCain baseball cap. Welcome to London! pic.twitter.com/KuynOwupFm

Amnesty International joined in on the protests as well when they unveiled “Resist Trump” banners across London’s Vauxhall Bridge. (RELATED: BBC Angers Viewers With Baby Trump Blimp In Studio) 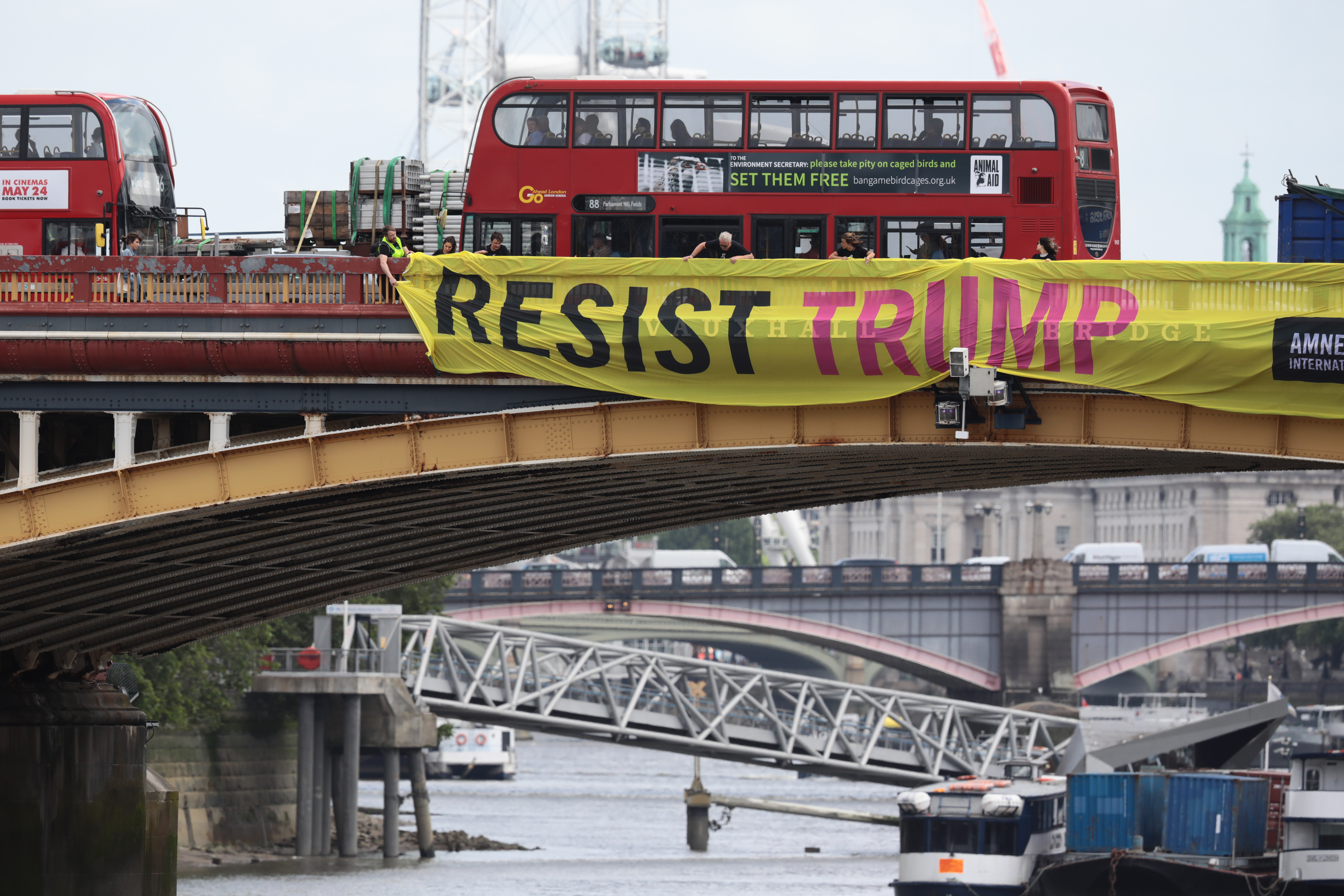 Trump started his three-day state visit to the U.K. on Monday, tweeting that he “hadn’t seen any protests yet.”