With more than twenty Democratic presidential candidates clamoring for traction, any advantage that can boost a candidate’s standing is precious, particularly if that advantage is financial.

And Mayor Pete Buttigieg has an advantage that very well may keep him in the race through Tuesday even if his early-state results are fairly lackluster: gay money.

But in an identity-politics-driven Democrat party, there is one group that has already shown a willingness to be very generous to a candidate who shares their background: gays and lesbians.

Though many gay activist organizations have disputed as “myth” the idea that gays have more disposable income, the numbers are clear: gays earn more and save more than other Americans. In fact, a 2016 US Treasury summary of tax returns showed gay couples earn $63,000 more per year than opposite-sex couples. (RELATED: Pete Buttigieg Says America Was Never That Great)

And Buttigieg has already begun filling his coffers with lots of gay money. As often as several times times a week he attends fundraising events with mostly gay attendees, including an April event hosted by Broadway executive Jordan Roth with suggested donations ranging from $250 to $2,800; a fundraiser last month with Washington bigwigs (average gift $750); and a sold-out $25-per-person “grassroots” event at a gay bar in Los Angeles. Hollywood gays have particularly warmed to his candidacy, with an exclusive star-studded major event planned for June 19 at the home of producer Ryan Murphy. 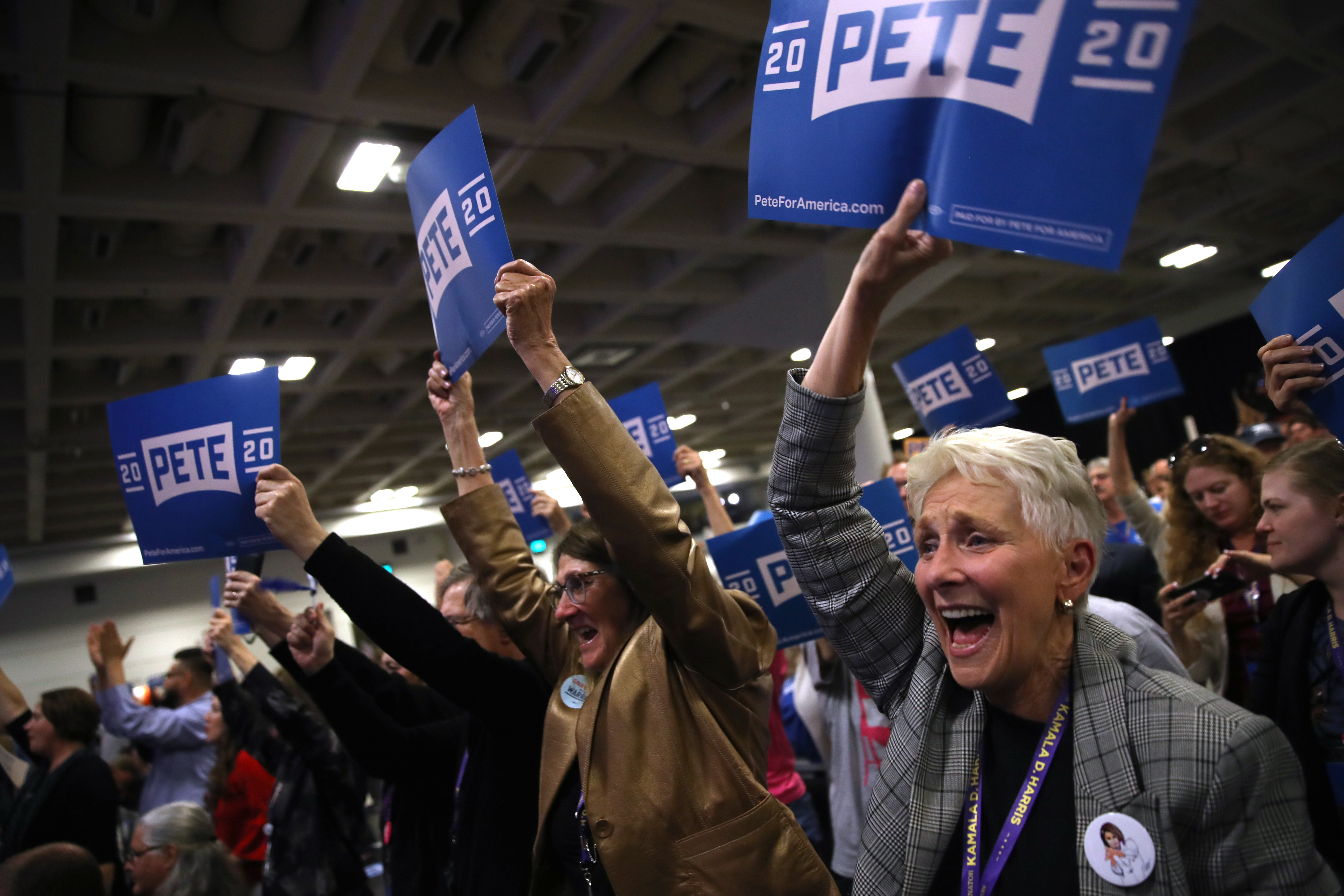 The week of May 8 alone he attended eleven fundraisers in California, which reportedly were heavily attended by members of the gay community.

According to several gay activists and fundraisers interviewed for this article, gay Democrats are split regarding which candidate they plan to vote for, but willingness to give money to the campaign of the openly gay mayor of South Bend, Indiana, is near-universal.

Take Sam Doten, for example. The chair of Stonewall DFL, the LGBTQ Caucus of the Minnesota Democrats does not support Buttigieg “personally” but that he’s “excited he is running and donated early on in his campaign.” A Bernie Sanders supporter with “Elizabeth Warren a close second,” Doten nonetheless donated because, he said, “the fact a gay candidate is running for president is extraordinary.”

And Lester Aponte, the co-chair of the LGBT caucus of the California Democratic Party, is a Kamala Harris donor and volunteer. But he’s also “very excited to see Mayor Pete do so well,” and thus he’s donated to his campaign too.

Similarly, Brian Pendleton, a mayoral appointee in Los Angeles who has been politically active as a donor and fundraiser for three decades, said he had “maxed out for both Biden and Mayor Pete.”

Among the gay activists who are already fully in the mayor’s corner, though, the enthusiasm is off the charts. Pendleton said, “a very well-connected political operative” recently sent him an E-mail about Buttigieg, “and I’ve never seen this person so excited… it’s absolutely palpable among those who are supporting him and are really feeling hopeful.” (RELATED: Pete Buttigieg Was Asked If Third-Trimester Abortions Should Be Legal. Here’s What He Said.)

And Rick Sutton, a longtime LGBT fundraiser and civil rights activist in Indiana who says he knows his fellow Hoosier “very well,” described Buttigieg’s campaign kickoff in euphoric terms: “I was in the fourth row and the hairs in my arm stood up, I never thought I’d see a gay candidate for president saying here’s who I am and here’s my husband … This is a big effin deal in our community.”

The enthusiasm and generosity among gays and lesbians may be particularly helpful to the mayor in 2020 because of a frontloaded calendar and new Democratic delegate-earning rules: unlike past “winner-take-all” elections, any candidate who wins at least 15 percent of the vote in a given state will earn delegates.

Historically, candidates who place poorly or even in the middle ranks in Iowa and New Hampshire drop out of the race because their fundraising dries up. The activists interviewed for this article said any decent showing by Buttigieg could keep donations coming in or even accelerate them, as the first choices of some generous gays and lesbians drop out of the race. Doten said if Buttigieg is “not knocked out after Iowa,” he can intensify his fundraising efforts by saying, “I have made history as a candidate.’”

Aponte called Buttigieg a “great example for young people,” and said if the mayor is still in the top five after the early states, “there will continue to be a lot of excitement about his candidacy and I don’t think the donations will dry up. He’ll be competitive” on Super Tuesday. 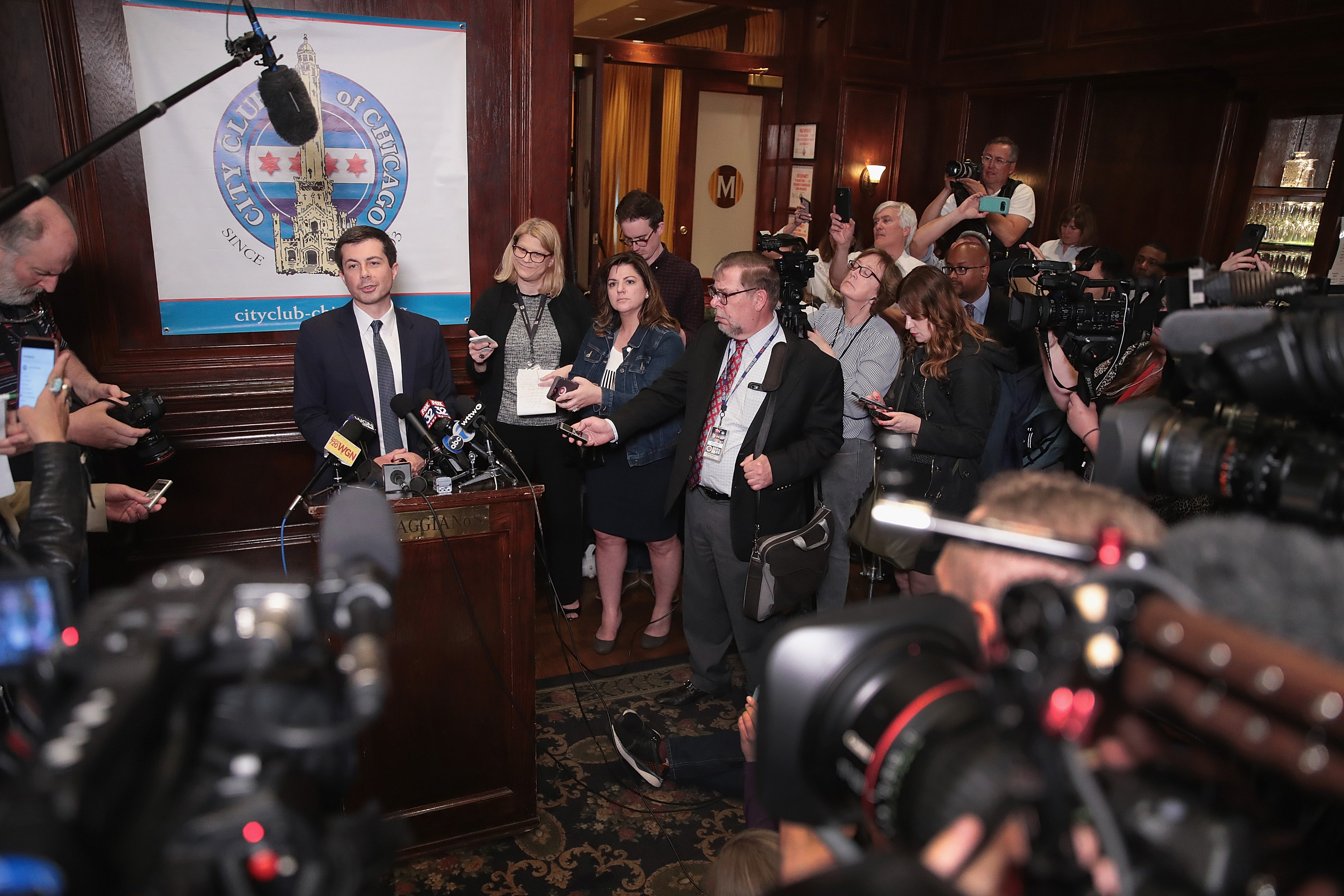 CHICAGO, ILLINOIS – MAY 16: Democratic presidential candidate and South Bend, Indiana Mayor Pete Buttigieg speaks to the press following a luncheon hosted by the City Club of Chicago on May 16, 2019 in Chicago, Illinois. Buttigieg is one of more than 20 candidates seeking the Democratic nomination for president. (Photo by Scott Olson/Getty Images)

Even more than previous years, Super Tuesday (March 3, 2020) will serve as a quasi-national race and thus require a lot of financial resources. Coming just one month after the Iowa caucuses and three days after the South Carolina Primary, well over a thousand delegates will be at stake, including the biggest prizes of California and Texas. Several of the Super Tuesday states like California, Massachusetts, Minnesota, and Colorado have home-state candidates in the race, many of whom will have dropped out by then, and any candidate with enough money to compete will have a shot at the 15 percent necessary to earn delegates. By the time the mega-primary day is over, more than 40 percent of the party’s delegates will have been allocated, so the race will be much more defined.

Which makes Buttigieg’s comparative advantage in surviving Iowa and New Hampshire all the more important.

This isn’t the first time gays have opened their wallets for a pioneering candidate on their issues – Bill Clinton raised a lot of gay money in 1992 for promising to allow gays in the military, and Howard Dean did the same in 2004 because of his support of civil unions. But the idea of a gay president is making some Buttigieg followers positively dreamy. As Sutton put it, “I can imagine the first Gay Pride Month when he’s in the White House… We will never be ignored again, we will always be at the table if he wins. Or, to some degree, if he doesn’t.”