Hollywood star and left-wing advocate Bette Midler suggested that someone in Donald Trump’s team should “shiv” or stab him in a late night tweet Wednesday.

“He actually looks better here! Maybe someone in his camp can gently give him a shiv. I mean, shove,” Midler said in a now-deleted social media post.

Her tweet was in response to Michael Moore’s comment on Trump’s surprise visit to a Virginia baptist church: “Seriously, WTF is this? At what the WH said was ‘a memorial for the 12 shot dead in Virginia Beach’ (it wasn’t), Trump, looking nothing like Trump, randomly wanders onto the altar in his golf shoes & cap, decides to stay for 15 min, then leaves, having thrown his curve at reality.” 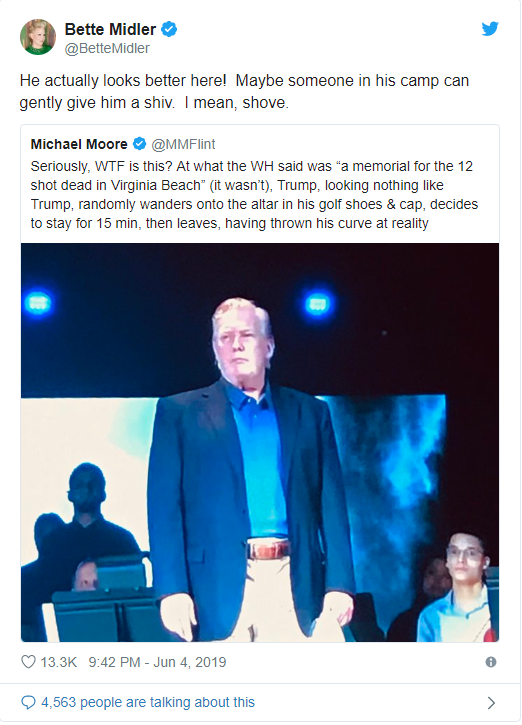 Twitter rules outline a zero tolerance policy prohibiting the advocacy or praise for violence on their platform.

“We will not tolerate behavior that encourages or incites violence against a specific person or group of people. We also take action against content that glorifies acts of violence in a manner that may inspire others to replicate those violent acts and cause real offline danger, or where people were targeted because of their potential membership in a protected category.”

Midler’s late night rant comes just a few hours after Trump called the Hollywood princess a “Washed up psycho” for falsely attributing a made-up quote to him.

“Washed up psycho Bette Midler was forced to apologize for a statement she attributed to me that turned out to be totally fabricated by her in order to make ‘your great president’ look really bad,” Trump said. “She got caught, just like the Fake News Media gets caught. A sick scammer!”

Washed up psycho @BetteMidler was forced to apologize for a statement she attributed to me that turned out to be totally fabricated by her in order to make “your great president” look really bad. She got caught, just like the Fake News Media gets caught. A sick scammer!

This wouldn’t be the first time Midler has been caught advocating for violence against Trump and other conservative political figures.

In February of last year, Midler said that she needed “Rand Paul’s neighbor,” an obvious reference to the attack on Republican Sen. Rand Paul in his front yard, which resulted five broken ribs.

Where’s Rand Paul’s neighbor when we need him?

In a now deleted tweet from last November she called for former special counsel Robert Mueller to hang Trump and his family. 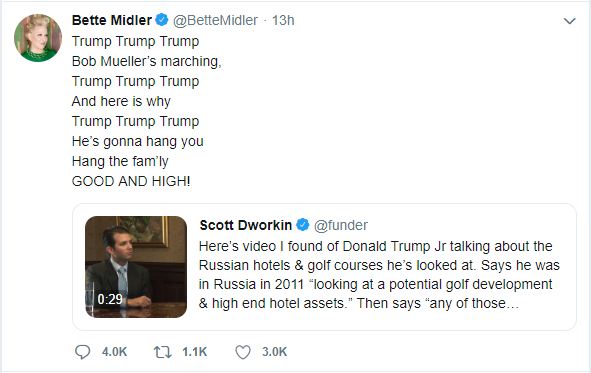 In August of 2018, Twitter permanently banned Gavin McInnes and several other accounts linked to the far-right, “Western chauvinist” group called the “Proud Boys” for a repeated history of inciting violence.