Democratic presidential candidate and former Vice President Joe Biden seems to be getting a pass from major media outlets on his son Hunter Biden’s business ties to China and Ukraine.

The New York Times has downplayed and attempted to explain away Hunter’s problematic dealings as a politically motivated conversation pushed by President Trump and his allies, while other outlets, including The Washington Post, have essentially ignored the story. Details about Hunter’s business dealings suggest his father leveraged his influence as vice president to their personal advantage in both China and Ukraine. They’re newly relevant as Joe’s presidential campaign gets underway. (RELATED: Three Questions Joe Biden Can’t Answer About His Draconian ‘Top Priority’)

Conservative author Peter Schweizer uncovered a lucrative investment deal Hunter struck with China, just weeks after he visited the country with his father, then vice president, in 2013. The $1.5 billion deal gave Hunter’s firm unprecedented privileges denied to more established U.S. investors with experience in China. (A lawyer for Hunter told The New York Times he did not conduct business with China during his trip, and has not received any money to date from the deal, although he acquired a 10 percent interest in the entity that oversees the fund after his father left office as vice president.) 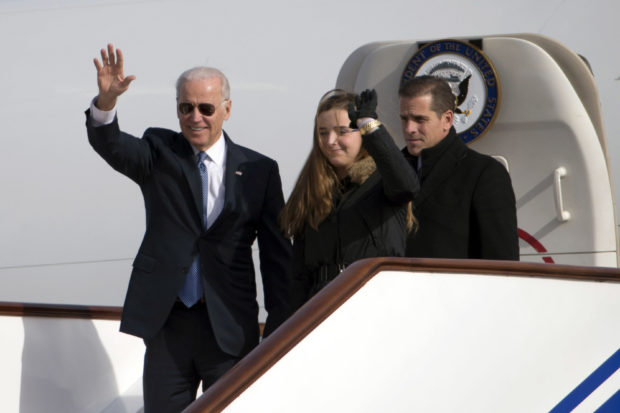 The firm, Rosemont Seneca Partners, had been established just a few years prior by Hunter, former Secretary of State John Kerry’s stepson Christopher Heinz, and Heinz’s longtime associate Devon Archer. Biden and Archer were in China meeting with top officials less than a year after they established the firm, Schweizer reported. One of those meetings took place just hours before a meeting in Washington between Vice President Biden and the Chinese president as part of a nuclear security summit.

Less than two weeks later, Hunter’s firm officially went into business with the state-owned Bank of China, as a founding partner in a new investment fund called Bohai Harvest RST (BHR). That firm has now triggered alarms because of its investment in an app the Chinese government is using to surveil ethnic minority Muslims living in western China.

Schweizer also noted that following the $1.5 billion deal in 2013, Hunter’s firm became an “anchor partner” in a China-owned energy company that was later accused by the State Department of stealing U.S. nuclear secrets. (RELATED: CNN Panel Straight Up Busts Out Laughing At Biden’s Claim To Have Marched For Civil Rights)

Biden has taken a notably soft approach to China on the campaign trail so far, downplaying the idea that it poses a threat. “China is going to eat our lunch? Come on, man,” he said at a campaign event in May. “They’re not competition for us.”

Schweizer’s work, published in his 2018 book, “Secret Empires: How the American Political Class Hides Corruption and Enriches Family and Friend,” also covered Republican Senate Majority Leader Mitch McConnell’s business ties to China through the family of his Chinese wife, Elaine Chao. The New York Times cited him in an extensive front page report on Chao’s China ties, headlined “A Cabinet Official, a Firm And a ‘Bridge’ to Beijing.”

“Elaine Chao has boosted the profile of her family’s shipping company, which benefits from industrial policies in China that are roiling the Trump administration,” the subhead reads. The story, complete with interactive graphics, is more than 6,000 words.

Hunter’s China ties, on the other hand, prompted one 1,500 word story buried inside the newspaper and headlined “Trump’s Demand for Investigations of Opponents Draw Intensifying Criticism.” His China deals are not mentioned until the 10th paragraph, and are framed as innocent personal business with no politically relevant connection to Vice President Biden’s influence.

The New York Times coverage of similarly problematic deals in Ukraine is also scarce and framed sympathetically to the Biden family. One fairly detailed look at Hunter’s business with Ukraine is again framed as a politically motivated story ginned up by Trump allies, with the headline “Biden Faces Conflict of Interest Questions That Are Being Promoted by Trump and Allies.”

According to Schweizer’s report, Hunter’s partner Devon Archer met privately with Vice President Biden in April 2016, five days before the vice president went to Ukraine with the news the U.S. would begin financially assisting the country’s natural-gas industry, a promise that has generated more than $1 billion of funds for Ukraine from the U.S. and International Monetary Fund. Within weeks, it was announced that Hunter and Archer would join the board of Burisma, a natural gas company owned by a Ukrainian oligarch.

“Neither Biden nor Archer had any background or experience in the energy sector,” Schweizer notes. Additionally, Hunter had recently been discharged from the U.S. Navy Reserves after testing positive for cocaine. (RELATED: Rudy Giuliani Is Pushing Ukraine To Investigate Joe Biden’s Connections)

Hunter’s work on the board involved transparency and corporate governance, although he had no substantial experience in professional legal counsel or Ukrainian law. Burisma paid him as much as $50,000 a month for his services, according to The New York Times. The company has been the subject of a corruption investigation by two different Ukrainian general prosecutors. Hunter and Joe told The New York Times they have never discussed Burisma or the investigations. 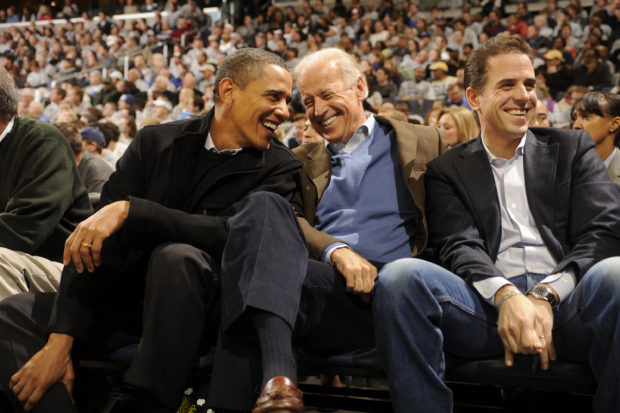 President of the United States Barack Obama and Vice President Joe Biden and Hunter Biden (son of Joe Biden) talk during a college basketball game between Georgetown Hoyas and the Duke Blue Devils on January 30, 2010 at the Verizon Center in Washington DC. (Mitchell Layton/Getty Images)

The first Ukrainian prosecutor was pushed out of his role after Vice President Biden lobbied for his removal in a trip to the country in March 2016. He threatened to withhold $1 billion in aid if the prosecutor wasn’t removed, ostensibly because of his mishandling of a number of cases unrelated to Burisma. The prosecutor who replaced him dropped the case against Burisma that same year. In March of this year, however, that same prosecutor reopened the case in a move some see as an effort to please the Trump administration and his boss, the president of Ukraine.

The New York Times found and reported some of these new details, but again, in a manner wholly sympathetic to the Biden family and clearly intended to downplay the potential problems it poses for Joe Biden’s 2020 campaign. The reporter who wrote the May 1 story now works as a spokeswoman for the president-elect of Ukraine, who has said he will replace the current prosecutor.

The Washington Post has not reported on either story, except to accuse Trump allies of digging into Hunter’s dealings deep inside a report on the Trump campaign making Biden and his family a primary target in 2020. Hunter’s deals are described in opaque and vague terms, such as “foreign business entanglements” and his “work in Ukraine.” China is not mentioned.

The Wall Street Journal reported on Schweizer’s book when it came out in 2018, but has not published anything on the new details or renewed scrutiny of Hunter given Joe’s presidential run, except a brief opinion piece by its “Best of the Web” columnist James Freeman titled, “Biden, McConnell and China.”

Freeman noted in the column that according to The New York Times, Hunter’s business partner Christopher Heinz was uncomfortable with he and Archer’s decision to join the board of Burisma, and has since worked to sever his business interests from theirs. Heinz thought their work on the board “created the appearance of selling influence,” an unnamed source said.

“If their work bothered a friend and business partner perhaps it will bother voters as well,” Freeman wrote.