Let’s begin with a thought experiment: What if the Republican leadership in Washington had bothered to learn the lessons of the 2016 election?

What if they’d understood and embraced the economic nationalism that was at the heart of Donald Trump’s presidential campaign? What would the world look like now, two-and-a-half years later? For starters, Republicans in Congress would regularly be saying things like this:

I’m deeply grateful for the opportunities America has given me. But the giant ‘American’ corporations who control our economy don’t seem to feel the same way. They certainly don’t act like it. Sure, these companies wave the flag — but they have no loyalty or allegiance to America. .… These ‘American’ companies show only one real loyalty: to the short-term interests of their shareholders, a third of whom are foreign investors. If they can close up an American factory and ship jobs overseas to save a nickel, that’s exactly what they will do — abandoning loyal American workers and hollowing out American cities along the way. … The result? Millions of good jobs lost overseas and a generation of stagnant wages, growing income inequality, and sluggish economic growth. … We can navigate the changes ahead if we embrace economic patriotism and make American workers our highest priority, rather than continuing to cater to the interests of companies and people with no allegiance to America.

If you regularly vote Republican, ask yourself: What part of that statement do you disagree with? Here’s the depressing part: Nobody you voted for said that or would ever say it.

Instead, the words you just read are from — and brace yourself, here — Sen. Elizabeth Warren of Massachusetts. Yesterday, Warren released what she’s calling her “plan for economic patriotism.”

Amazingly, that’s pretty much exactly what it is. There’s not a word about identity politics in the document. There are no hysterics about gun control or climate change. There’s no lecture about the plight of transgender illegal immigrants. It’s just pure old-fashioned economics: how to preserve good-paying American jobs. (RELATED: Tucker Carlson Touts An Unlikely Ally As He Slams ‘Libertarian Zealot’ Republicans)

Even more remarkable: Many of Warren’s policy prescriptions make obvious sense. She says the U.S. government should buy American products when it can. Of course it should. She says we need more workplace apprenticeship programs, as four-year degrees aren’t right for everyone. That’s true.

She says taxpayers ought to benefit from the research and development they fund. And yet, she writes, “We often see American companies take that research and use it to manufacture products overseas like Apple did with the iPhone. The companies get rich, and American taxpayers have subsidized the creation of low-wage foreign jobs.” And so on.

She doesn’t mention the role that overregulation has played in incentivizing American companies to leave our shores, but besides that, she sounds like Donald Trump at his best. 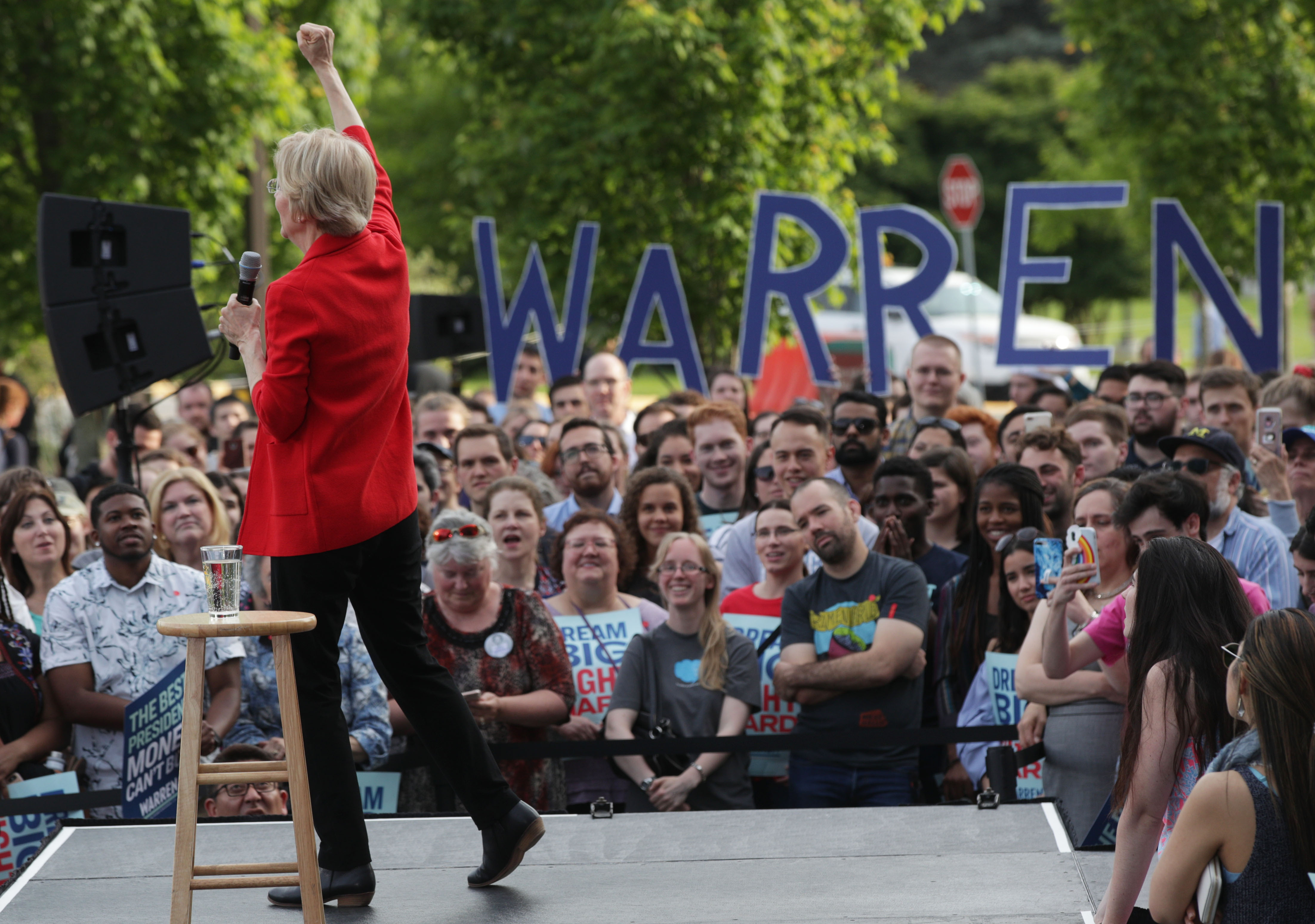 Who is this Elizabeth Warren, you ask? Not the race-hustling, gun-grabbing, abortion extremist you thought you knew. Unfortunately, Elizabeth Warren is still all of those things, too. And that is exactly the problem — not just with Warren but with American politics. In Washington, almost nobody speaks for the majority of voters.

There isn’t a caucus that represents where most Americans actually are: nationalist on economics, fairly traditional on the social issues. That candidate would be elected in a landslide. Yet that candidate is the opposite of pretty much everyone currently serving in Congress.

Our leadership class remains resolutely corporatist: committed to the rhetoric of markets when it serves them, utterly libertine on questions of culture. Republicans will lecture you about how payday loan scams are a critical part of a market economy, and then they’ll work to make it easier for your kids to smoke weed because, hey, freedom. Democrats will nod in total agreement. They’re all on the same page. (RELATED: Tucker Carlson’s Beginnings)

Just last week, the Trump administration announced an innovative new way to protect American workers from the ever-cascading tidal wave of cheap third-world labor flooding this country. Until the Mexican government stops pushing illegal aliens north over our border, we will impose tariffs on all Mexican goods we import. That’s the kind of thing you’d do to protect your country if you cared about your people.

The Democrats, of course, opposed it. They don’t even pretend to care about America anymore. Here’s what Republican leader Mitch McConnell said: “I think it’s safe to say you’ve talked to all of our members and we’re not fans of tariffs. We’re still hoping that this can be avoided.”

We’re not fans of tariffs either, but after both Republican and Democratic politicians have made virtually no effort to stem the flow of illegal immigration that has harmed low-wage American workers, at least Trump is trying. He’s using access to our giant consumer market to persuade another country to stop taking actions that are hurting regular Americans. Why is that such a bad thing?

Tucker Carlson is the host of “Tucker Carlson Tonight,” on Fox News at 8 PM weeknights. He and Neil Patel co-founded The Daily Caller, one of America’s fastest growing online news outlets, which regularly breaks news and distributes it to over 15 million monthly readers. Carlson and Patel also co-founded The Daily Caller News Foundation, a nonprofit news company that trains journalists, produces fact-checks and conducts longer-term investigative reporting. The Daily Caller News Foundation licenses its content free of charge to over 300 news outlets, reaching potentially hundreds of millions of people per month. To find out more about Tucker Carlson and Neil Patel and read features by other Creators Syndicate writers and cartoonists, visit the Creators Syndicate website at www.creators.com. Copyright 2019 Creators.com