Democratic presidential candidates are rushing to clarify old positions that no longer jibe with the progressive wing of their party in their bids for the 2020 nomination.

The endless flip-flopping among some of the top candidates has made for some interesting contradictions and explanations as to when and how their positions allegedly changed.

We’ve compiled some of the biggest political “evolutions” into one list.

Biden’s campaign confirmed to NBC News on June 5 that the former VP stood by his decades-long support of the Hyde Amendment, a ban on using federal funds to pay for abortions.

Just a day later and after intense backlash from the left-wing of the Democratic Party, Biden said that he can no longer support such an amendment when the Republican Party is purportedly assaulting women’s health care. (RELATED: Biden Buckles, Flips On Hyde Amendment Under Pressure From Party)

Biden also claimed in 1974 that he believed Roe v. Wade went “too far,” adding, “I don’t think that a woman has the sole right to say what should happen to her body.” He now fully supports Roe v. Wade.

In 2006, Biden supported a fence on the southern border to stop drugs from coming into the United States from “corrupt Mexico,” opposed amnesty for illegal immigrants, and urged immigrants to learn English.

“Folks, I voted for a fence, I voted, and unlike most Democrats — and some of you won’t like it — I voted for 700 miles of fence,” Biden said at the time.

Since then, Biden has taken a softer tone on immigration and has attacked Trump’s tough stance on sanctuary cities and the family separation policy. 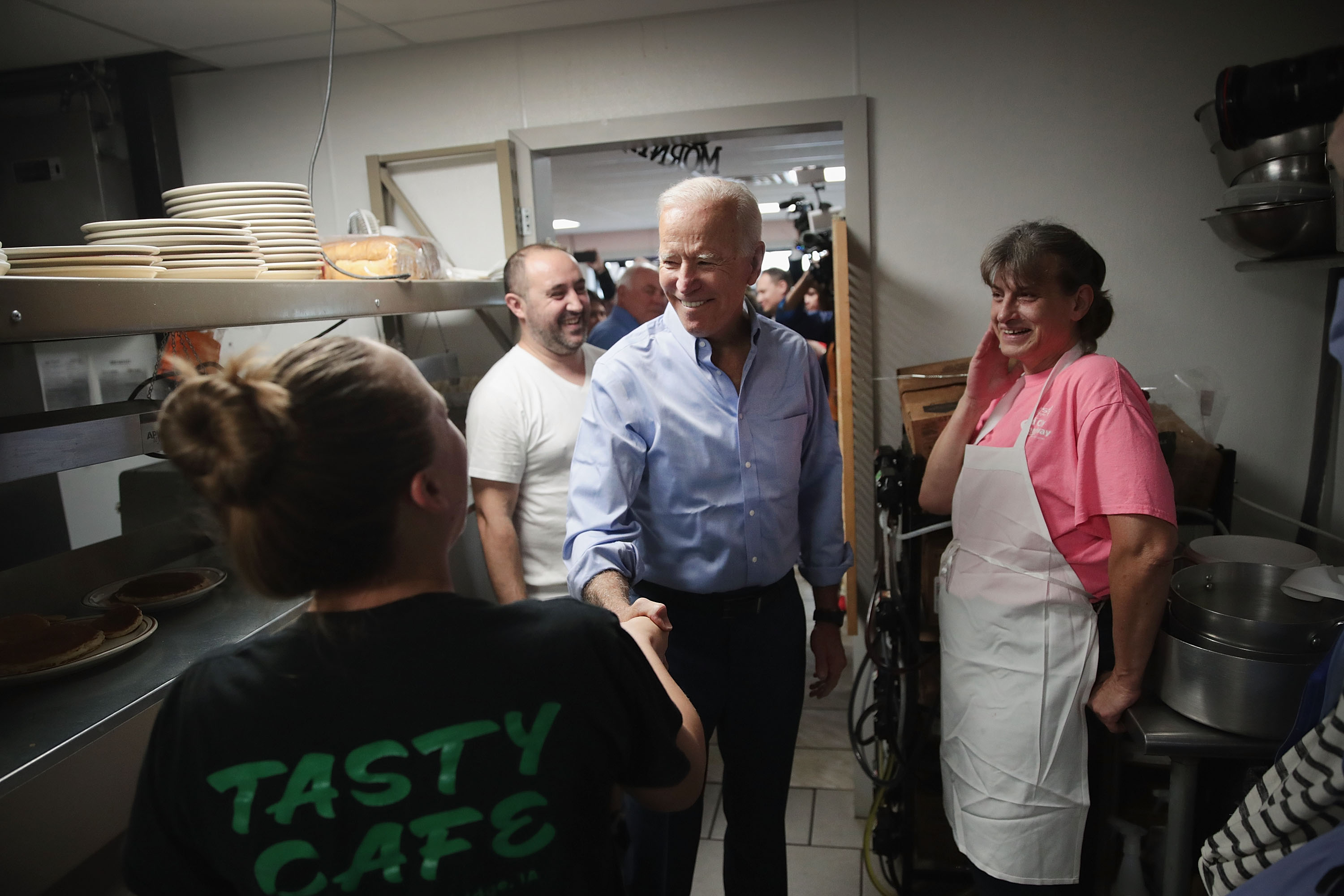 ELDRIDGE, IOWA – JUNE 12: Democratic presidential candidate and former U.S. vice president Joe Biden greets the staff at the Tasty Cafe during a quick campaign stop at the restaurant on June 12, 2019 in Eldridge, Iowa. The stop was part of a two-day visit to campaign in the state. (Photo by Scott Olson/Getty Images)

Biden endorsed school segregation in 1975, calling it a matter of “black pride” and rejecting federal busing to integrate students.

“I think the concept of busing … that we are going to integrate people so that they all have the same access and they learn to grow up with one another and all the rest, is a rejection of the whole movement of black pride,” Biden said.

In 1987, Biden stunningly claimed he marched for civil rights, a claim that caused a CNN panel to burst into laughter.

In an apparent attempt to push back on Trump’s tariff war with China, Biden claimed last month that China is not a threat to the U.S.

“China is going to eat our lunch? Come on, man,” Biden said at an Iowa City event, adding that “they’re not competition for us.”

Biden later walked back the comments, stating, “I don’t suggest China is not a problem. I’m the guy who’s been the toughest on – I’ve spent more time with Xi Jinping than anybody else, just because the nature of my job.”

Gillibrand was once a staunch reporter of gun rights in the U.S. — she signed an amicus brief submitted to the Supreme Court arguing for overturning a handgun ban in DC and described private gun ownership as an absolute right.

Her positions earned her an ‘A’ rating from the National Rifle Association, but by 2010, the senator’s rating had dropped to an ‘F.’

“I think that makes me a better candidate for president. I think it makes me a better person, because if you don’t have an ounce of humility to know when you’re wrong, how are you possibly going to govern all of America?” Gillibrand said of her flip.

Gillibrand attracted the ire of the NRA when she called them “the worst organization in the country” during a town hall recently, causing them to post a fawning letter she wrote the gun rights organization in 2008.

“I want to be very clear that I always have and always will believe that the correct interpretation of the 2nd amendment is that it applies to an individual’s right to carry guns,” Gillibrand wrote at the time.

Since dropping her pro-gun rights position, Gillibrand has called for a ban on firearm suppressors, large magazines, and so-called “assault weapons.” 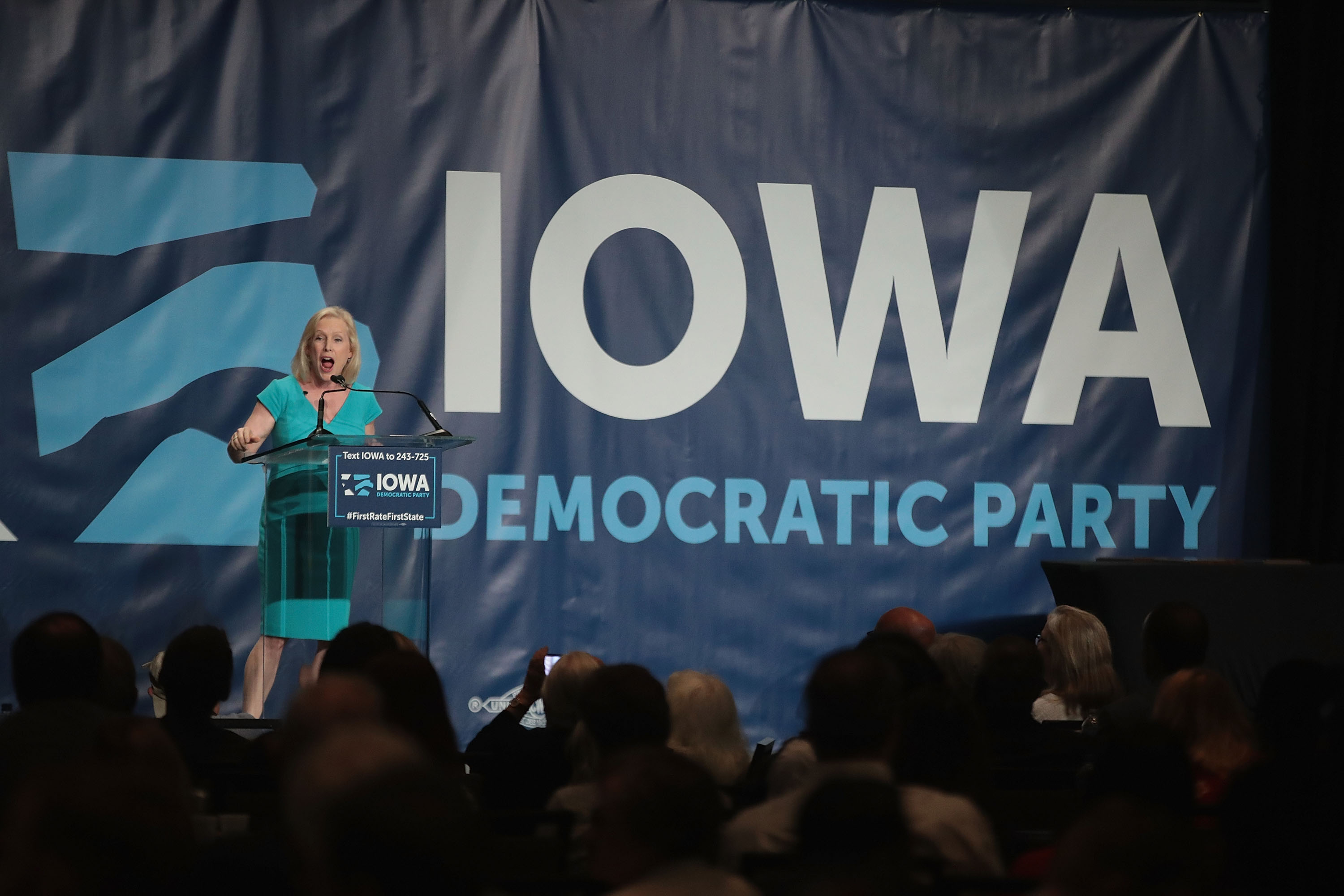 Gillibrand has also changed her tune on immigration since graduating from a congresswoman to a senator, asserting that she “was wrong” when she promoted English as the national language and opposed certain benefits for illegal immigrants. Gillibrand also pushed for more deportations, expanding detention capacity, hiring more immigration judges, and even closing the border.

Now, Gillibrand supports a path to citizenship for DACA recipients, slams the president for his family separation policy, and calls to abolish Immigration and Customs Enforcement (ICE).

Gillibrand reportedly did not support same-sex marriage while serving as a congresswoman and was tepid on whether or not to repeal “Don’t Ask Don’t Tell.”

Gillibrand later said she is pro-same-sex marriage and was notably seen dancing and drinking at a gay bar during 2019 Pride Month. (RELATED: Gillibrand Equates Pro-Lifers To Racists, Anti-Semites, Homophobes)

In 1993, Sanders voted against a bill that established national background checks for gun purchases, and in 2003 and 2005 he voted for a bill that shields gun companies from lawsuits stemming from their alleged responsibility in violent crime.

However, the senator now supports universal background checks, a ban on assault weapons, and ending “gun show loopholes.” In his campaign announcement speech, he vowed to take on the NRA, despite his past positions that fell in line with the gun rights group.

During the 2016 campaign, Sanders claimed that pro-abortion group Planned Parenthood is “part of the establishment” that his campaign intended to fight against. Sanders supports abortion rights, making the jab even more of a head scratcher.

But after Planned Parenthood endorsed Clinton for president, Sanders walked back his comments and claimed that were inflated by the Clinton campaign.

“That’s not what I meant,” Sanders said in an interview, later clarifying in a statement, “I join with Planned Parenthood, NARAL and all Americans who have been fighting the never-ending attacks on women’s right to choose.”

Warren in 2003 endorsed a voucher system that would allow students to choose the school they attend, rather than merely being assigned to a school based on where their parents live.

Since then, Warren has been mum on the idea of school choice and voted for a cap on charter schools in Massachusetts in 2016.

Warren supported the potential arrival of Amazon in Boston in 2017, and expressed disappointment when the city ultimately wasn’t chosen. Now she advocates for breaking up big tech companies like Amazon and refused to say if she would support Amazon coming to Boston today, instead arguing more generally against cities being asked to “give away tax revenues.”

O’Rourke’s Senate run in Texas against incumbent Republican Sen. Ted Cruz was fueled by donations from fossil fuel companies, with the former congressman accepting $540,000-plus donations from the oil and gas sector. He received the second-highest funding from the fossil fuel industry after Cruz.

In May, O’Rourke promised not to take any money from such companies and said he would return any donations over $200 from the oil and gas sector since launching his presidential campaign.

Last March, O’Rourke supported a bill in Congress that included $1.6 billion in wall funding in the Rio Grande Valley and $44.5 million for repairs on existing fencing.

That voting record is a far cry from his comments in February that he would tear down existing walls if he could. 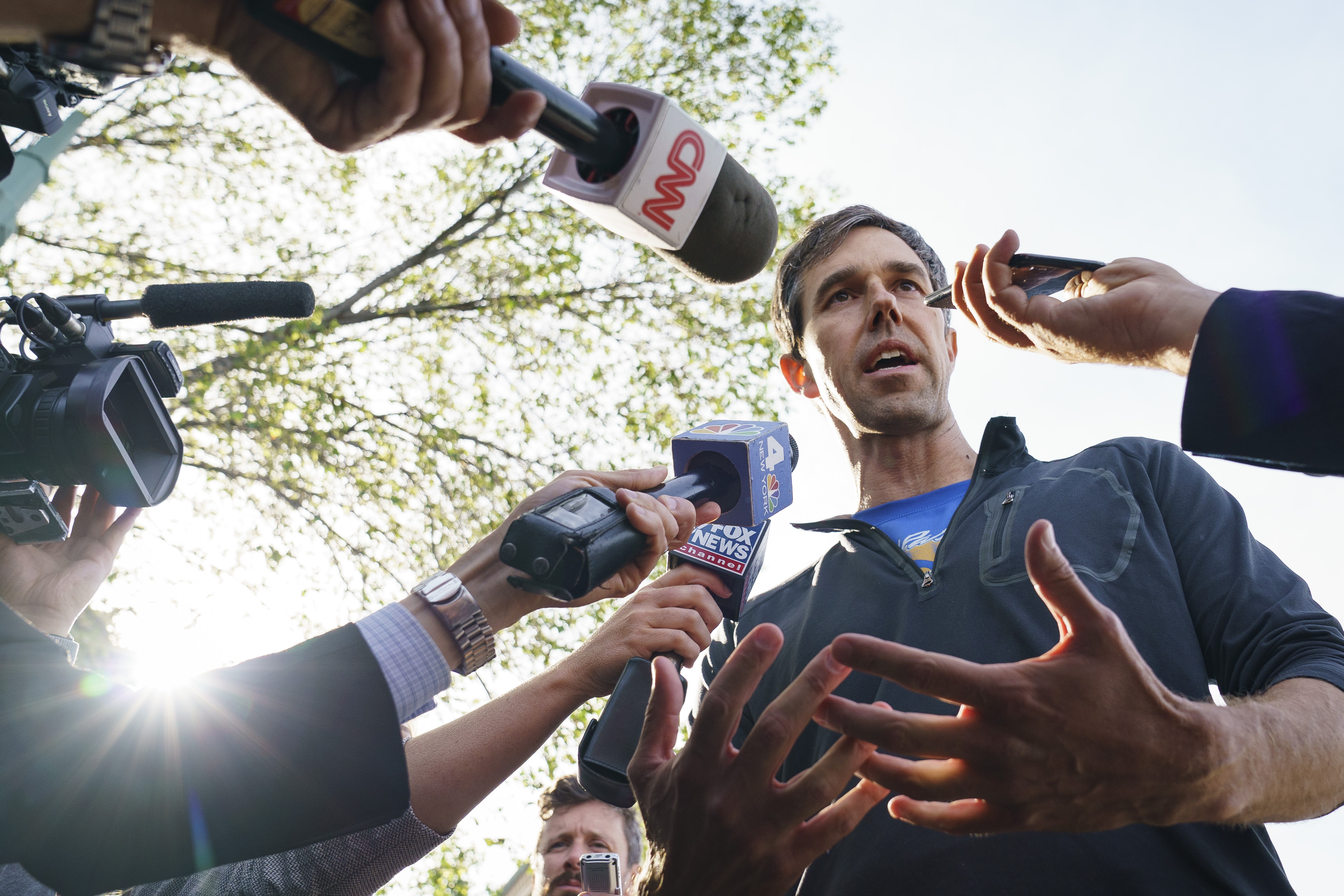 O’Rourke voted for a bill in 2016 that opened the door for federal funding of studies into offshore drilling in the eastern Gulf of Mexico. His campaign says he wouldn’t make the same vote today.

Politifact gave O’Rourke a “full flop” rating after he bailed on his own idea of requiring young people to perform public service.

In January 2018, O’Rourke said he supports “a national service bill that will require every young person, no matter how wealthy or how poor, to spend at least a year of their lives in service to this country, in a military unit, in a conservation corps unit, in a medical unit, in a teaching unit, in some way that they’re going to help to make this country better and stronger and have to sacrifice together and leave that with a shared understanding of who we are as a people ⁠— and no kid is going to be rich enough to buy their way out of it.”

A few days later, O’Rourke said he went too far in calling the public service “mandatory.”

“He does not plan on introducing a bill to require mandatory national service. Texans made their voices heard and he is listening to them,” a campaign spokesperson clarified.

Campaigning in Iowa a few months ago, O’Rourke said that he is not in favor of traditional reparations and denied they should be the central focus of his party’s conversation on race relations.

In April, at an event with Al Sharpton, O’Rourke said he would “absolutely” sign a law studying and considering reparation payments to African Americans. (RELATED: Beto O’Rourke Paid His And His Wife’s Company $110,000 In Campaign Funds)

Booker was once a staunch supporter of Israel and seen as one of the few Democrats who opposed efforts to boycott the Jewish state. He called BDS an “anti-Jewish movement” and cosponsored legislation to ban U.S. companies from boycotting Israel.

In January, however, he voted against a bill that provided aid to Israel and allowed states to avoid doing business with companies that boycott Israel.

Booker also recently posed with activists holding a sign that read, “From Palestine to Mexico, all the walls have got to go,” referencing Israel’s security fences that were erected in an attempt to prevent Palestinian terror attacks. Booker later claimed he didn’t read the sign before posing with it.

Booker told Politico in January that he opposed killing the Senate filibuster, stating, “We should not be doing anything to mess with the strength of the filibuster. It’s one of the distinguishing factors of this body. And I think it is good to have the power of the filibuster.”

He reiterated that position in a March interview with NPR, explaining, “And we need to understand that there’s good reason to have a Senate where we’re forced to find pragmatic bipartisan solutions.”

However, apparently bowing to pressure from the left, Booker expressed openness to ending the filibuster later that month.