Media Matters published an article Thursday defending the Steele Dossier as legal foreign opposition research on the basis of the fact that Democrats paid for the information.

The article came after President Donald Trump said he would “listen” to damaging information about a political opponent from a foreign source.

Trump told ABC’s George Stephanopoulos in the Wednesday interview that he would “maybe” call the FBI or listen if a foreign entity offered dirt on a political opponent, adding, “I think you might want to listen. There isn’t anything wrong with listening. If somebody called from a country —Norway — [and said,] ‘We have information on your opponent’ — oh, I think I’d want to hear it.” 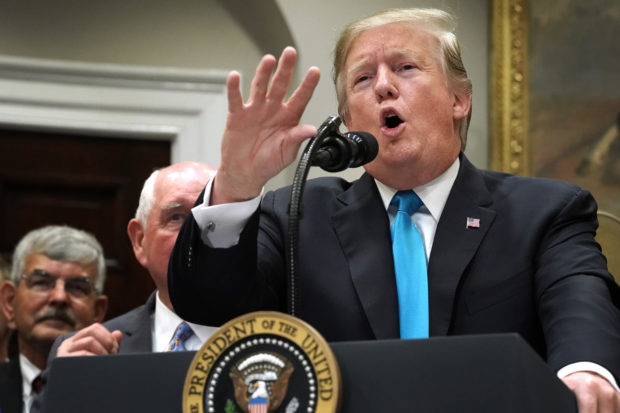 President Donald Trump delivers remarks in support of farmers and ranchers in the Roosevelt Room at the White House May 23, 2019 in Washington, DC. (Photo by Chip Somodevilla/Getty Images)

As Media Matters’ Courtney Hagle and Bobby Lewis documented, however, defenders of the president have pointed out that Democrats themselves — particularly the Hillary Clinton 2016 presidential campaign — are guilty of soliciting foreign-obtained opposition research. And California Democratic Rep. Adam Schiff was fooled last year when two Russian comedians called him pretending to be a Ukrainian official with dirt on Trump.

But the article then accuses conservative media of attacking Clinton and drawing a “false equivalence with the Steele dossier.” It drew a distinction between the two by citing a former Federal Election Commission chief counsel, who told The Washington Post that the difference essentially lies in whether the exchange is considered a campaign contribution or a commercial transaction.

As criticism of Trump’s comments poured in, pro-Trump media rushed to defend the president. Many immediately pointed to Hillary Clinton, a common scapegoat for right-wing media; others drew a false equivalency with the dossier compiled by former British intelligence officer Christopher Steele on alleged connections between Trump and the Russian government to accuse Democrats and the media of a double standard when it comes to accepting foreign assistance during the election. But in fact, while it is illegal to accept contributions from foreign nationals for political campaigns (as Trump suggested he would do), “paying a foreign national fair market value for opposition research is generally not illegal,” as former chief counsel for the Federal Election Commission Lawrence Noble told The Washington Post. “It is considered a commercial transaction, which is not a contribution.”

Meanwhile, former CIA analyst Buck Sexton blasted what he considers a double standard. “Apparently the only standard that matters is ‘get Trump,'” he wrote via Twitter.

It’s not foreign oppo or a “thing of value” derived from a foreigner or “foreign interference” if your campaign pays money for it?

That’s really what you are going with, Democrats?

Apparently the only standard that matters is “get Trump.”