MOOD: “I’ve decided to embrace the Block and Mute buttons on the Twitter. I believe this will add 4 years to my life expectancy.” — Preet Bharara, former U.S. attorney for the Southern District of New York.

Michael Avenatti, the ex-lawyer to Stormy Daniels, has been on a tear as of late. “Remember all those press reports and media outlets that ripped me for allegedly committing domestic violence 7 months ago?” he asked Thursday morning on Twitter. “My family and I do. Because we lived it.  And now those allegations have been shown to be completely bogus. Totally fabricated. Where are the apologies?”

While it is true that the LA City Attorney will not be filing charges against Avenatti for domestic violence, he’s still embroiled in a world of shit in alleged embezzling and extortion allegations.

It is no wonder why Avenatti wasn’t doing cartwheels over a recent profile in Vanity Fair. Part of the May headline was: “Inside the Epic Fail of Michael Avenatti.” What’s to like if you’re Michael Avenatti?

After Fox complimented MSNBC’s Donny Deutsch for hosting a show that Trump watches on Saturday night, Avenatti struck out at her, writing, “And when he does, you and VF can then do a hit piece on him, with false facts, using unnamed sources, in an effort to destroy his reputation but make yourself look like a journalist with a real “scoop” on TV. Keeping [sic] kissing Cohen’s ass and doing his bidding Emily Jane.”

Fox replied cheerily, “I’ll keep that in mind. Thanks!”

Avenatti fancies himself a journalism expert: “You are an embarrassment to the profession. You lied to me about the premise of the article to get the interview. You then refused to allow me to adequately comment. You then proceeded to knowingly print false, fabricated facts while ignoring others. That’s not journalism.”

A journalist apologizes for responding to bigoted followers

“I should apologize to the followers whom I have enabled over the years by responding to their bad-faith replies as if they weren’t rendered in bad faith or weren’t the product of bigotry, spite, pettiness, argumentativeness, sophistry & cruelty.” — Marc Caputo, Politico.

Want to work with CNN’s Brian Stelter? You must be critical, but not cynical.

“They should be skeptical, but not cynical — genuinely excited to be covering the changes and disruptions occurring in newsrooms, board rooms and beyond, but also ready to take a critical look at them.”

One of the perks: “Paid time off to volunteer.”

“So what were Trump’s communications gurus thinking? Stephanopoulos back in the White House, access for two days, Air Force One ride, interview in the Oval. Someone thought this would end well for him.” — David Martosko, U.S. political editor, Daily Mail. (RELATED: Hall Monitor Gets All His WH Q’s Answered)

“If you’re an unvaccinated adult you should like get vaccinated (FREAK!) but if you don’t get vaccinated you probably shouldn’t tell me about your unvaccinated status because I will call you a freak and tease you mercilessly until our friendship is no longer sustainable.” — Ben Dreyfuss, Mother Jones.

“Only took me the entire train ride home to realize the reason I feel like I’m gonna pass out is that I never went and got lunch today.” — Amanda Mull, The Atlantic.

Yashar’s new enemy is a mosquito: “A single mosquito has been destroying me over the past two hours and every time I’m close to killing it, it vanishes.” — Yashar Ali, freelancer, HuffPost, New York Mag.

Lyz Lenz releases a book she says destroyed her life

“I did not cry when I got the advance readers. But this is it. The final thing. The first book I made. It ruined my life. I had to move out of my home to write it. But I put it all in there. And I’m so happy I did. And maybe I’m crying now but also allergies are bad, allergies.” — Lyz Lenz, Columbia Journalism Review, author of God Land.

Cameron Hawthorne is a media reporter for Washington Free Beacon.

Washington Examiner honcho has a self-portrait 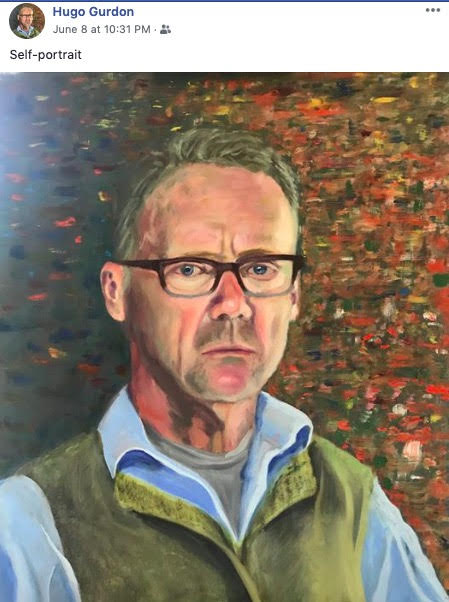