A deadly gang war is in progress in one of the most gentrified neighborhoods in the nation’s capital, and police say it will likely pursue through the summer.

Many of the shootings in Columbia Heights, Washington, D.C., this year were related to drugs, which are typically run by various gangs in Columbia Heights, according to Capt. Ralph McLean of the 3rd District Police Department. He confirmed to The Daily Caller News Foundation that there is an ongoing gang-based drug war in the D.C. neighborhood.

“We don’t know if it’s a dispute internal to the gang or a dispute between two gangs,” McLean told TheDCNF. He referred to the situation as an “internal dispute.” (RELATED: Drug Abuse Is Rampant Across US. DC Ranks Worst)

There were 12 reports of shootings in Columbia Heights between April 29 and May 9. Sometimes, multiple shootings were reported, according to posts from PoPville. Occasionally the police would arrive to find no perpetrators, just empty shell casings and bullet holes in cars.

Columbia Heights is also the face of gentrification in the District, with numerous news reports touting its overall improvement.

But there have also been shootings in the neighborhood nearly every weekend, according to PoPville, which reports on both data obtained from police and information sent in from residents.

Victims of shootings so far this year have mostly been black. One Latino woman was also shot, according to McLean, who added that an innocent bystander was shot and killed in a separate incident.

“We’ve been lucky so far that only one innocent bystander was hit,” McLean told TheDCNF.

D.C. sought to keep affordable housing. One such complex has been home to gang violence

An affordable housing apartment complex called Columbia Heights Village has been a hotbed of violence, with four or five gang-related shootings in the surrounding area as of May, according to McLean, who believes each one was associated with residents.

Meanwhile, just two blocks away sits a Target, a Starbucks, a Best Buy, and various other chain and locally-owned retail stores, restaurants and cafes. The complex is just a few minutes’ walk from a metro station and a recently opened Wawa.

Some of the Columbia Heights Village residents are “part of the problem,” McLean told TheDCNF, noting that the building’s management has been proactive in trying to help. The management did not respond to multiple requests for comment.

Over $62 million was invested to save subsidized housing and help people buy buildings in Columbia Heights between 2002 and 2009, resulting in the highest tenant purchases in the city, according to Governing, a news site dedicated to local governments.

The drug war could be an internal dispute within the Columbia Heights Village Crew, but confirming this can be difficult. Gang-related shooting victims are often uncooperative when police question them, according to McLean.

For example, one gang member shot on May 16 has not cooperated with police, McLean told TheDCNF.

Violent crime on the rise in Columbia Heights 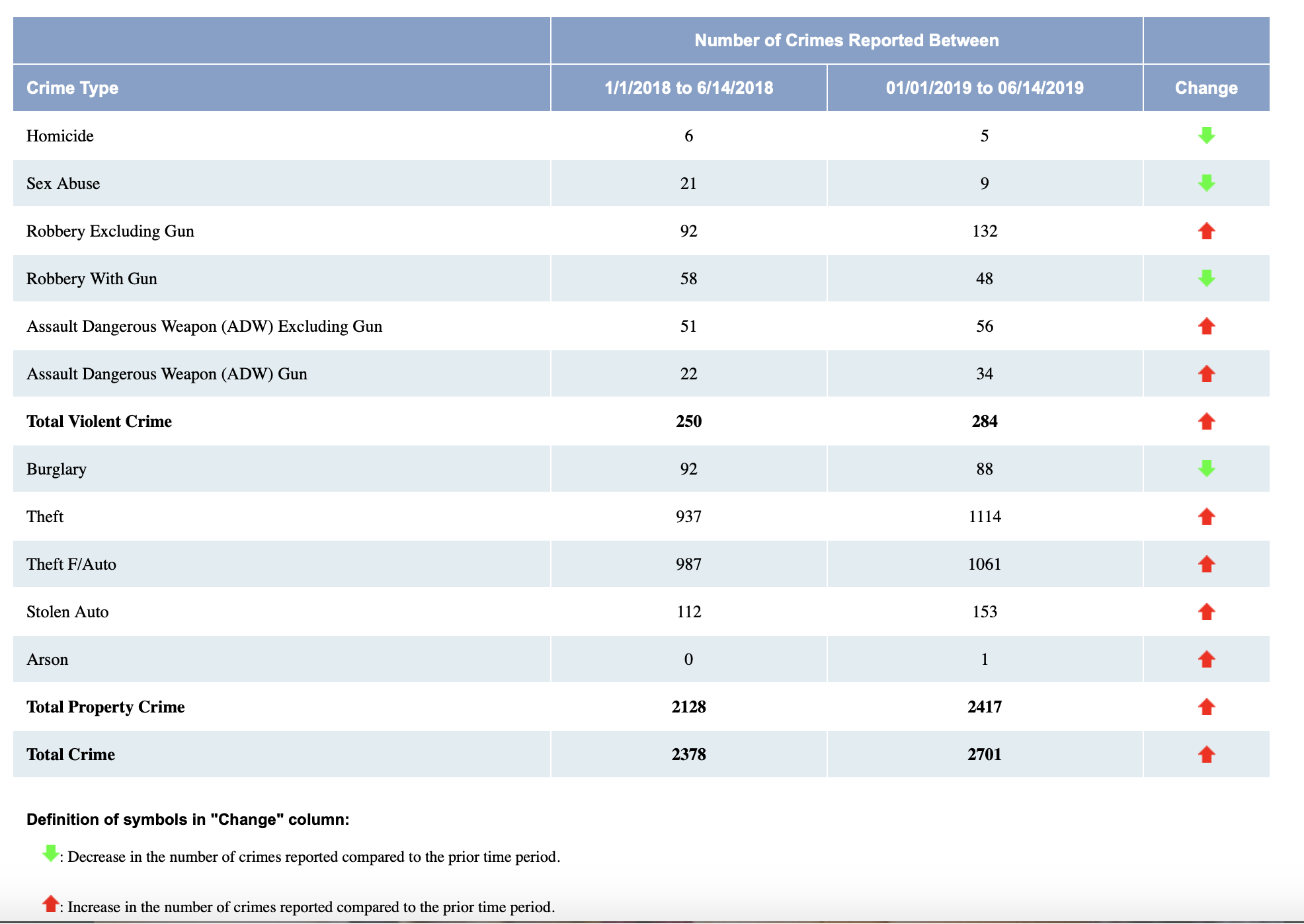 There have been more violent crimes from Jan. 1 through June 14 in Columbia Heights, according to Metropolitan Police Department crime data. In 2019, there have been 284 violent crimes reported. There have also been 12 more assaults with a dangerous weapon crimes (gun). Overall, crime is up in 2019 by 323 crimes.

Over 275 businesses on 14th St. were damaged from fires and looting, with more than half of those being completely destroyed, according to the Post.

After the riots, the area became a go-to spot for prostitution and drugs, according to the Washingtonian. Since then, efforts have gentrified the area, and it is now one of the more sought-after places in the city. 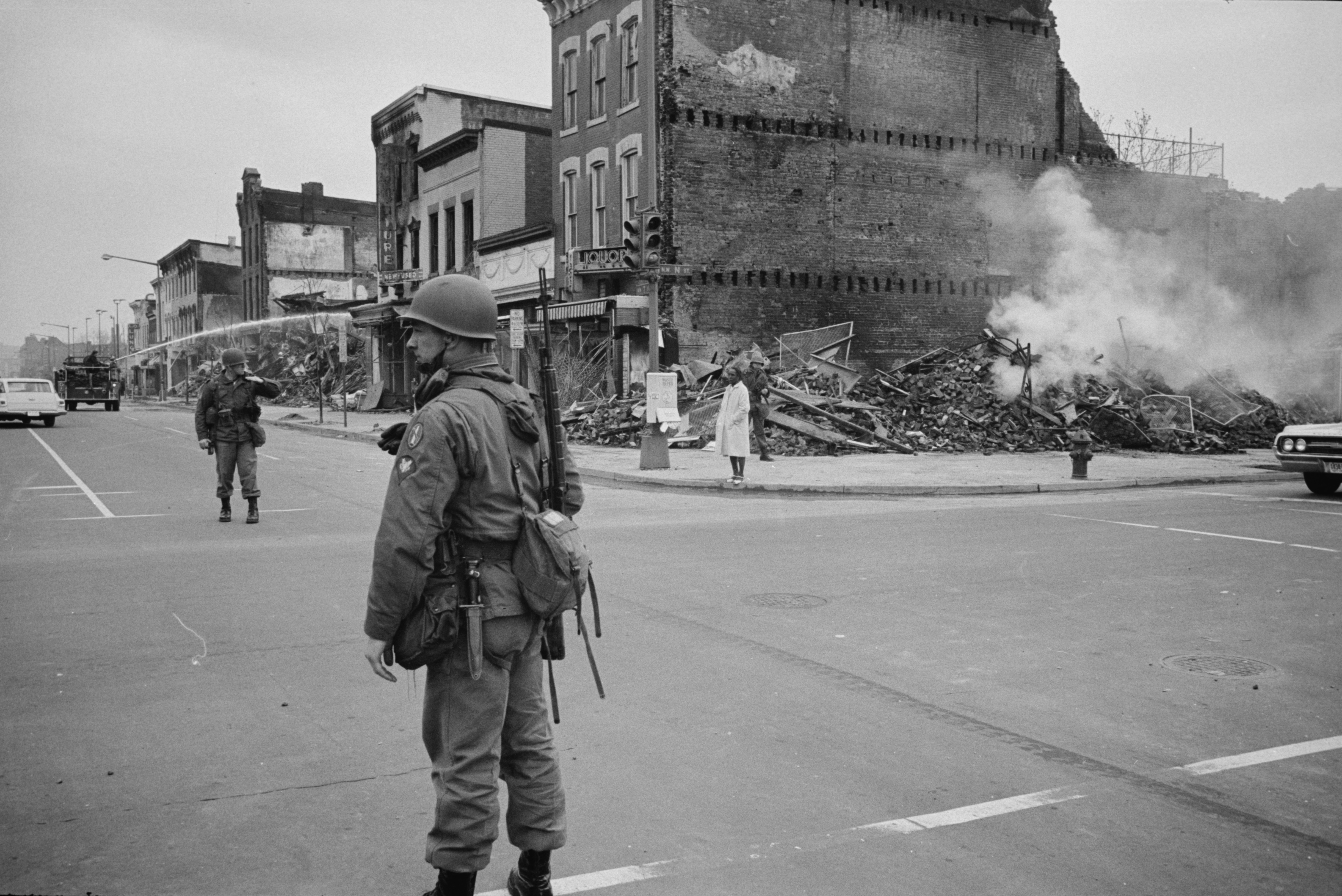 A soldier stands guard with the ruins of buildings that were destroyed during the riots that followed the assassination of Martin Luther King, Jr., in this April 8, 1968 photograph (Library of Congress/Handout via Reuters/Reuters)

The median household income currently sits at $83,371, according to Niche, which is above the national average of $55,322.

The metro station built in Columbia Heights in 1999 sparked this gentrification, according to Governing. Since then, construction has boomed and businesses have flocked to Columbia Heights. Today, there is a Target, two Starbucks, condominiums, restaurants, bars and more. (RELATED: Neighborhood Gentrification And Education May Deter Violent Criminals)

The city invested $138 million into Columbia Heights schools, parks, a recreation center and a plaza, Governing reported. The population increased by 6% between 2000 and 2010, and Columbia Heights was described as one of the fastest-gentrifying neighborhoods in the country by the Fordham Institute in 2012.

Between 2000 and 2010, the white population quadrupled, while a quarter of blacks and almost one-fifth of Latinos left the area, according to Governing.

Despite these fast growing changes, the drug and gang issue have persisted, plaguing this otherwise up-and-coming neighborhood. Columbia Heights Village, the affordable housing apartment complex that’s been at the epicenter of the shootings, sits at the center of the neighborhood.

There has been a crime plan put into effect, McLean said. Police have dedicated extra officers to the areas where these shootings have been an issue, including 11 through 15th streets and between Euclid Street and Park Road. Over holiday weekends, such as Memorial Day, the police department has officers working overtime, McLean said.

“The crime plan is going to be in effect for the entire summer, because the kids get out of school soon and that ramps things up a little bit,” McLean told TheDCNF in May. “When school lets out of the summer and the curfew is later, we start to have more crime.”

The police department has also been attending community meetings where McLean said residents have expressed gratitude for seeing so many more police officers in the area lately.

However, shootings have continued in Columbia Heights. PoPville reported shootings on May 31 as well as June 1, 2, 4, 6, 7 and 8.

City Councilmember Brianne Nadeau, who represents Columbia Heights, did not respond to repeated requests for comment.