“The same David Brooks who appointed himself an expert on ethics and morals also left his wife and married the 20-something assistant who helped him write his book on ethics and morals. The book is called ‘The Road To Character,’ and y’all I literally can’t.”

Meghan Marguerite McCain, the Duchess of Sedona, appears on The View in a bejeweled tiara

Is she confusing herself for another Meghan? 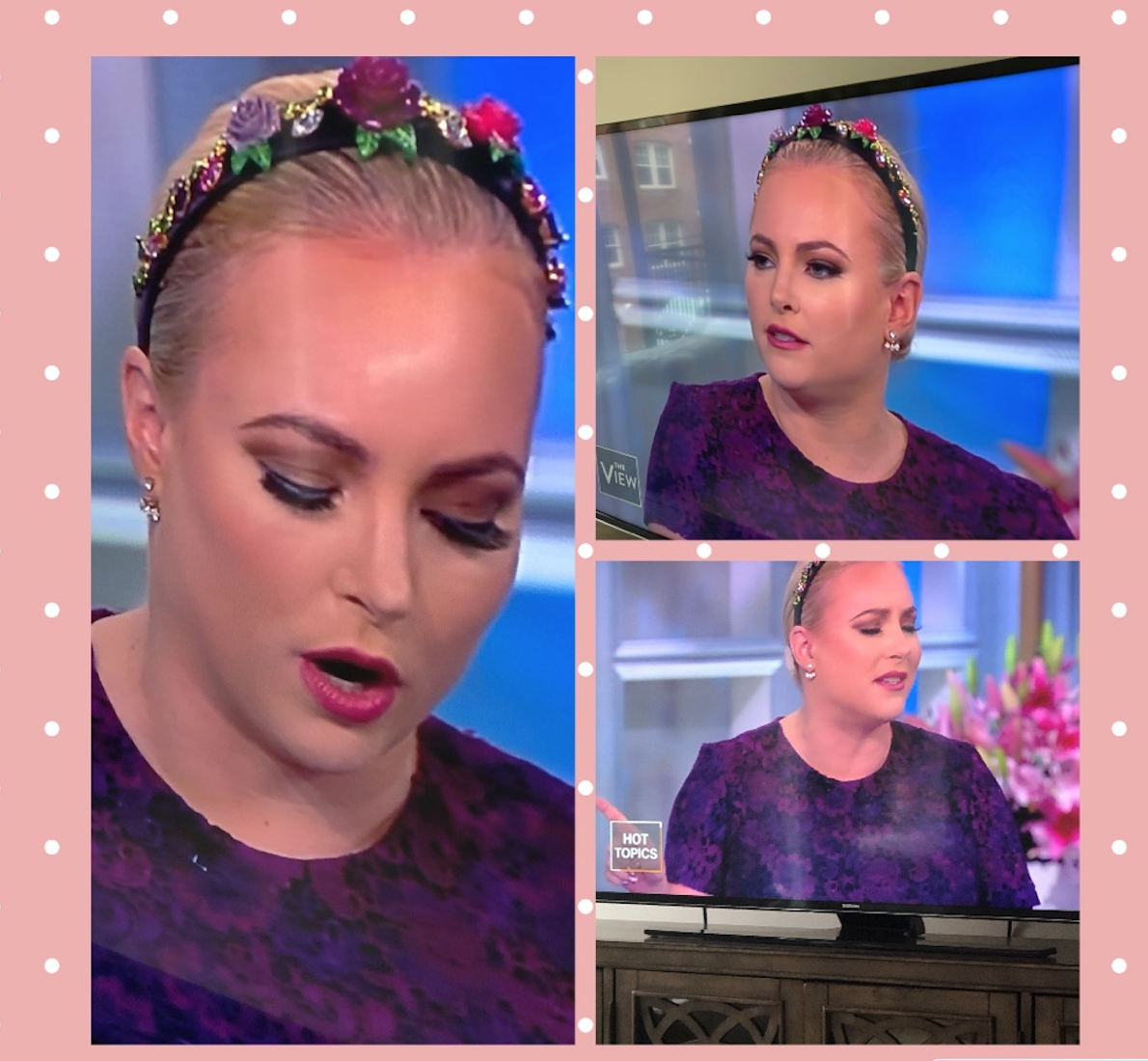 (RELATED: I’m Crying Because Meghan McCain Blocked Me On Twitter)

A note about nude photos from a Playboy writer

“Any adult has a right to take nude photos of themselves and share them with whomever they choose. Whoopi is trying to say it’s not smart for a celebrity to do it, but instead she says, ‘you don’t get to do that,’ which is wrong. Your body, your choice, just be careful.” — Amee Vanderpool, contributor, Playboy.

Because who wants that?

This happened at a Trump rally in Orlando. Junior was clearly in dick mode.

“Donald Trump Jr.: ‘Joe Biden comes out. ‘Well, if you elect me president, I’m going to cure cancer.’ Wow. Why the hell didn’t you do that over the last 50 years, Joe?'” — headline, The Hill.

Congressman may step in for Hannity?

MOOD: “Does anyone have any tips for managing an unruly email inbox? I get so many PR emails and spam that I’m missing emails from coworkers and such. (yes, i know this is a dumb question.)” — Sopan Deb, NBA writer for the NYT.

Deb explained further, “Part of the reason I bring this up is that it seems like I’m ignoring emails or not responding to them…when I just don’t see them. I’m not trying to be rude!”

Tom Fitzgerald, of Fox5 in D.C. advised, “Start identifying the ones you don’t want as “junk” or look for the ‘unsubscribe’ link on the email.”

Keith Smith, an astute (eye roll) contributor for Yahoo Sports, said the delete button always works. “I use the ‘file, act on it, delete it’ method. If you can act on it and delete right away, that is best. Otherwise, file it until you can act on it delete it. And of course, straight delete anything you can right away.”

Deb shot back, “My issue is that like….I get like 50 emails an hour. it’s impossible to keep up with it all at once.”

In other words, don’t hate him because he’s so popular. Megan McKinley, who works for the NRSC, cracked, “Ok we get it you’re popular.”

Robert Eberhard, cofounder of SportsMuseNet, probably had the dumbest advise in the pile: “Just delete everything without reading. If it’s that important, they’ll either email you again or call/text to get your immeidate [sic] input.”

“If you ever need proof that chivalry (or sexism, depending on who you ask) is not dead, try lifting a heavy object in a Home Depot and seeing how many men rush to help.” — Amber Athey, White House reporter, The Daily Caller.

“Being an adult is every bit as awesome as I thought it would be as a kid. I can pick out the marshmallows in the Lucky Charms and there’s nobody to tell me to stop.” — Kathryn Watson, CBS News White House reporter.

Cato trade lawyer has thoughts about idiots on Twitter

Man upset about being called fat by a woman he defended

“I defended a FB friend who was being crudely insulted by an anti-vaxxer and immediately thought, ‘She’s gonna call me fat. Just watch.’ Right as rain. Every. Fucking. Time. You can’t underestimate them.” — Steve Silberman, NYT bestselling author of the Future of Neurodiversity.

“Why do people bake their own bread? It does not appear to be cheaper than purchasing bread. Is it because they enjoy the act of baking bread or is it because they are delusional enough to believe they can bake bread better than professional bread bakers?” — Ben Dreyfuss, editorial director, Mother Jones, SoulCycle addict.

Journos call Trump out for Central Park Five: “POTUS tells @AprilDRyan he will not apologize for taking out a full page ad calling for the men known as the Central Park Five to get the death penalty. He says people on ‘both sides’ confessed. The men were exonerated via DNA evidence.” — Yashar Ali, HuffPost and New York Mag.

That’s a wrap! **Personal News** As of today I will be with the New York Post covering politics … all tips and leaks etc can now be sent to JLevine1@nypost.com. (As always DM for Signal)” — Jon Levine, formerly the media editor for TheWrap.

Trump supporter tries to shame Washington writer: “I have to say it is an … experience… to stand at the front of the press pen and have a man in a leather American flag printed jacket and straw hat with long blonde hair wave his finger in your direction and say ‘shame shame!'” — Olivia Nuzzi, New York Mag. (Note to readers: Excuse me while I assume a guy wearing a leather American flag jacket and a straw hat with long blond hair is a Trump supporter.)

TV’s Steve Harvey has faith in his faith: “I really believe God can do anything. I ask God for OUTRAGEOUS things. I live by Ephesians 3:20, the book of Deuteronomy and so many others. You can’t out-faith me, you can’t out-believe me. My faith doesn’t waver. I wouldn’t have made it this far without Bible scriptures.” — Steve Harvey, talkshow host.