Weatherby, Inc. culminated more than two years of work to move its headquarters from Paso Robles, Calif., to Sheridan, Wyo., when it cut the ribbon on a brand-new facility on the north end of town. The ceremony was attended by the first lady of Wyoming, Jennie Gordon, former governor Matt Mead, Weatherby president Adam Weatherby, all Weatherby employees, and many state and local dignitaries who recruited the company. 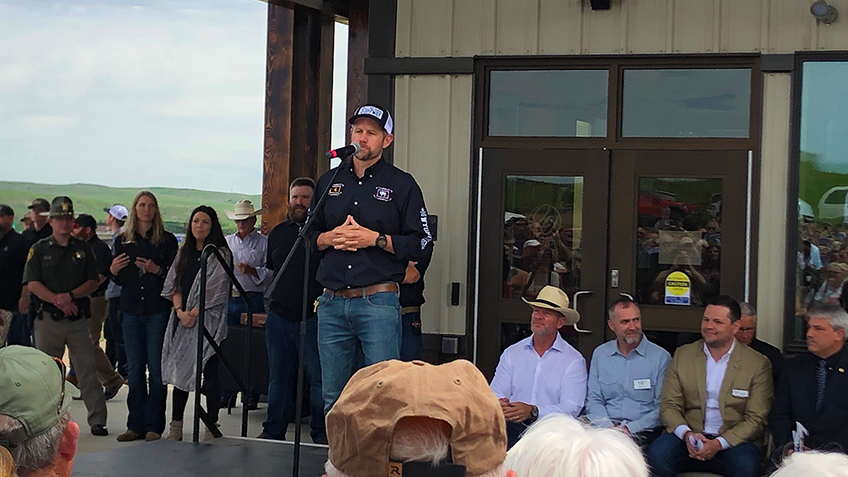 Mead’s administration was fundamentally instrumental in recruiting the California gunmaker beginning in winter 2017. A cornerstone of his administration was increasing the diversity of business throughout Wyoming. Mead is known as a governor who wanted to make Wyoming “the firearm state.” He made Weatherby an offer the company couldn’t refuse: an attractive package of land, financing and grants that helped the company build its new facility, adjacency to Sheridan College, a technical school the company may draw on for future employees, and no state corporate taxes. Weatherby is “our Wyoming neighbor,” said Mead, “and I’m proud of it.”

Today Wyoming is known to be gun- and business-friendly. Weatherby’s positioning on the north end of Sheridan, within sight of Interstate 90, should help develop the area as a manufacturing cluster. For years, Weatherby struggled with high taxes and onerous regulations on the firearm trade in California. And for years, company representatives will confess, the company sought a way out. They found they’re match in the Cowboy State. Now, Weatherby has moved from the state with the highest population to the lowest, and from “the highest taxes to the best possible taxes, and from the worst firearm state to the best,” said Adam Weatherby. The move, he said, “took exactly two years, eight months and six days.” In other remarks, he touted his company’s proximity to I-90 “for shipping” and to the Bighorn Mountains “for play.”

The new headquarters sits on 9 acres; 4 more acres lie available on the company’s Sheridan footprint for future expansion. The facility spans 85,000 square feet, about double its old space of 45,000 square feet. Inside are front-of-the-business offices for engineering and marketing, among other operations, and back-of-the-business operations like shipping and receiving, firearm assembly, firearm part finishing, a custom shop, a custom ammunition loading facility and more. In the bottom level of the building sits two underground proof ranges: a 100-yard range and a 300-yard range.

“Production capacity has about doubled,” said Weatherby vice president Luke Thorkildsen. For instance, in California, Weatherby’s ability to Cerakote firearms was maxed out; the company outsourced about 70 percent of such work. To get to this point, Adam Weatherby and his leadership team made tough decisions during construction of the new facility in order to cut construction costs and increase firearm production capability. For instance, employees park on tightly packed gravel rather than a paved lot; the decision saved almost $100,000—about the cost of a new computer numerically controlled machine. Now, that new machine helps increase production of firearms on the facility floor. There, machinist Shawn Graf, originally from Lander, Wyo., cuts threads on the muzzles of barreled Howa 1500 actions. Weatherby has for generations purchased the actions from Japan to sell as its Vanguard rifle, a very popular unit in America. Howa would have charged Weatherby an exorbitant cost to thread the muzzles of its barreled actions before shipping. Additionally, the cutting would have taken two steps, not one. Instead, today Weatherby cuts the threads itself in one step on one machine for about a fifth of the cost it would have paid previously.