Our advice to President Trump ahead of the next stage in the U.S.-China trade talks is encapsulated in a Chinese proverb: “Patience is a bitter plant, but its fruit is sweet.”

The threat to food availability and security from Chinese pig Ebola and fall armyworm will prevent China from aggressively using tariffs as an offensive weapon against the U.S. over the coming year. Just as the poor structure of China’s leveraged economy necessitates that they return to the negotiating table with the U.S. ⁠— the largest buyer of its goods ⁠— food insecurity in China will oblige them to put aside their main retaliatory tool and start earnestly negotiating with the U.S.

President Trump needs to both recognize his leverage in these trade talks and have the confidence that China’s primary source of counter-leverage has a short expiration date.

The structural state of China’s economy is in peril after a decade of reckless credit growth. Following the great financial crisis, the Chinese government pursued economic growth at all costs, which has left them with high financial leverage and bad debts. As a result, China’s U.S. dollar shortage has become acute. These structural problems leave the Chinese economy and financial system vulnerable to a slowdown. (RELATED: China Halts Purchases Of American Soybeans)

In response to the imposition of U.S. tariffs, China retaliated by imposing tariffs on 99% of all U.S. agricultural exports. These were devised to hurt senators who represent agricultural states ahead of the 2020 election. Understandably, U.S. farmers and their political representatives have reacted with great alarm. Currently U.S. pork exports to China are subject to a 62% tariff and soybeans are subject to a 27% tariff, while chicken exports are outright banned. U.S. farmers are hoping these tariffs will be lifted imminently as part of an eventual trade deal.

Regardless of the outcome of negotiations between Presidents Trump and Xi at the upcoming G-20 meeting in Osaka, Japan on June 28, the pain inflicted on U.S. farmers by China is just short-term and soon will be over. The terrible reality for the Chinese is that China is facing an unprecedented combination of agricultural challenges: Chinese pig Ebola (also known as African swine fever) and fall armyworm. These threats have already impacted Chinese agricultural production and will take an even greater toll in 2020. 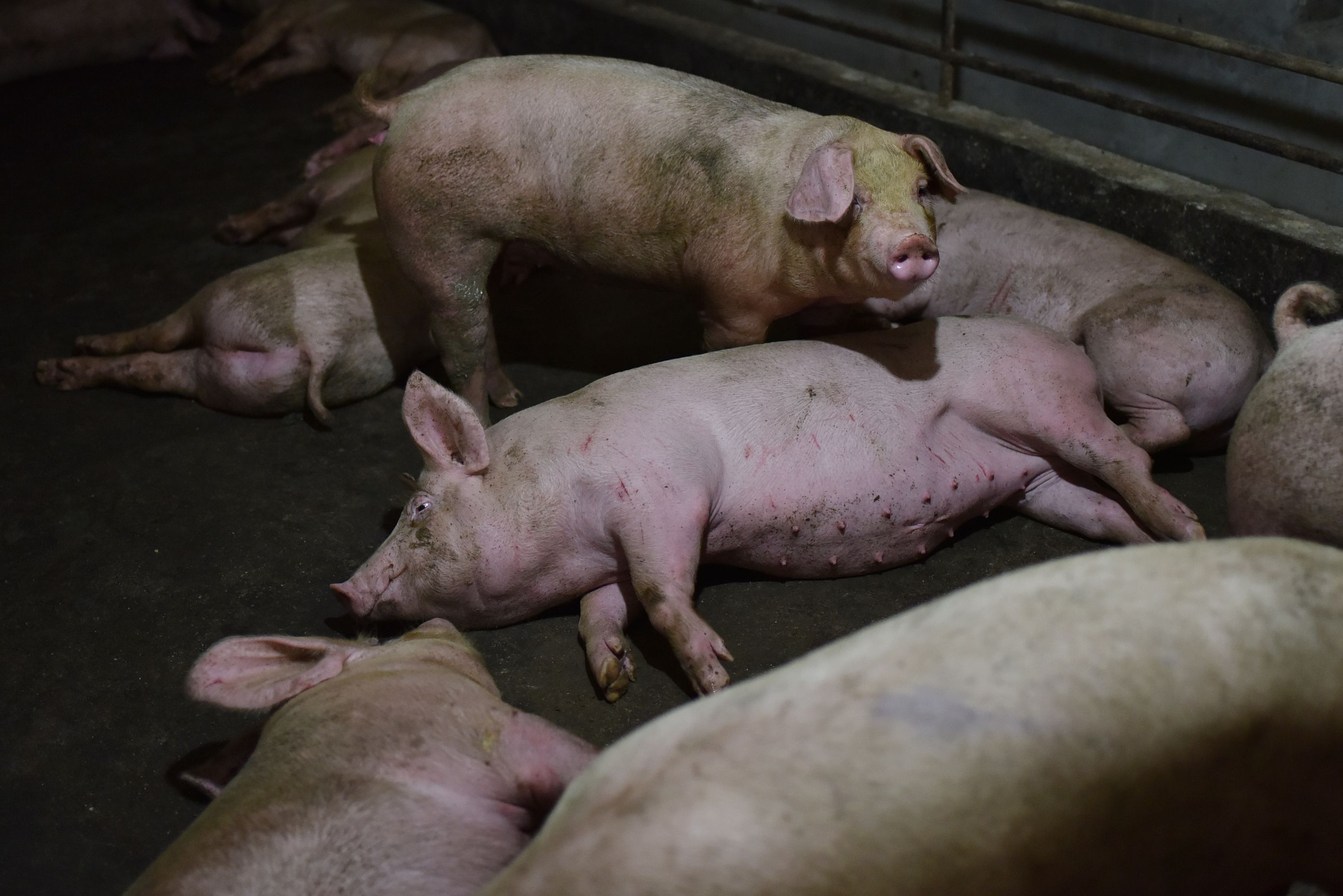 This file photograph taken on August 10, 2018, shows pigs resting in a pen at a pig farm in Yiyang county, in China’s central Henan province. – Unprecedented situation in the world meat market, the ravages of the African swine fever epidemic in China are strongly increasing the prices of pork: a boon for breeders across the world in this Chinese year of the pig. (Photo by GREG BAKER/AFP/Getty Images)

Chinese pig Ebola is a severe and highly virulent disease nearly always fatal to hogs but purportedly harmless to humans. The virus moves effortlessly between pigs and can stay alive for great time and distances in feed, workers’ clothing, equipment, ticks, and mud. There is no vaccine nor cure. Previous outbreaks have been extremely destructive and difficult to control. According to the British Veterinary Association, CPE  “is an acute viral hemorrhagic fever which, in domestic pigs and wild boar, results in case fatalities approaching 100 per cent.”

This particular outbreak of African swine fever has already proven to be the deadliest in world history. Christine McCracken, senior animal protein analyst for global lender Rabobank says, “It’s historic; there’s never been anything like this in the history of modern animal production. And it’s a frightening situation only in that there is no current control.”

In fact, the disease has already spread to Mongolia, Vietnam, Cambodia North Korea, South Korea and parts of Europe. McCracken estimates that 200 million pigs (roughly half of China’s pig population and 25% of the global pig population) or more will die this year.  Others (including Hayman) believe that to completely eradicate the disease, the entire Chinese pig herd may die this year. China’s Ministry of Agricultural and Rural Affairs reportedly claim a 20% reduction in the Chinese hog population, but various professional estimates have the decline closer to 40% with an even larger reduction in the sow population (down 80-90% in many provinces in China), which is a leading indicator of the level of Chinese pork output in coming months. (RELATED: More Than 600 U.S. Companies Sign Letter In Support Of Trump’s Tariffs)

China is both the world’s largest producer and consumer of pork, at around 50% of the world’s pork supply and 20% of the world’s animal protein supply. The global cross-border trade in pork (i.e., total global exports) only constitute 15% of Chinese demand. If the worst-case scenarios come true and nearly the entire Chinese hog herd is affected, then China will need to import massive amounts of U.S. pork, regardless of the state of U.S.-China trade talks.

To make matters worse, the fall armyworm, a caterpillar which damages crops, including corn, soybeans, rice, and sugarcane, has spread into China from Myanmar and is now running rampant in 15 southern Chinese provinces. The USDA attaché in Beijing forecasts that the fall armyworm will spread to the corn growing regions in the north of China by the fall of 2019. Previous infestations have resulted in a reduction in corn yields by at least 20%. Crop losses in Africa have recently exceeded 70% due to the army worm. China as the world’s second largest corn producer, after the U.S., is facing a second unprecedented threat which must ultimately lead to higher grain imports.

China is facing an imminent protein and food shortage. The price of pork and other proteins in China will skyrocket this year. In fact, China’s national average pig price is already up +15.4% for the month of June, +30.4% for 2019, and up +53% over the past year. Looking forward to 2020, acute protein shortages will require China to significantly increase animal protein imports globally in order to maintain current consumption patterns. The purchases will be sourced directly from the U.S., regardless of the presence of tariffs, or from other animal protein exporting countries, such as Germany, Spain, and Denmark (as long as CPE hasn’t already killed their herds).  Chinese pig Ebola will cause a biblical global shortage of pork for years to come.

J. Kyle Bass is the Founder and Chief Investment Officer of Hayman Capital Management, an investment manager of private funds focused on global event-driven opportunities. Bass is a founding member of the Committee on the Present Danger: China. He is also Chairman of the Board of The Rule of Law Foundation. Mr. Bass is the former Chair of the Risk Committee of the Board of Directors of the University of Texas Investment Management Company (UTIMCO), which manages approximately $45 billion. Mr. Bass serves on the board of the Texas Department of Public Safety Foundation (www.texasdpsfoundation.org) and is on the advisory board of Predata, a machine learning and predicative analytics platform.

Dan Babich is Senior Managing Director with Hayman Capital Management. Prior to joining Hayman in September 2014, Mr. Babich was a senior analyst at Fortelus Capital Management, LLP (“Fortelus”) in London for six years.  At Fortelus, Mr. Babich focused on special situations across the capital structure in the financial and telecom sectors. Mr. Babich graduated with a B.A. in Physics from Princeton University in 2002 and a Ph.D. in Physics from Harvard University in 2006.