Though news articles and activist assertions about President Trump’s policies on gay issues consistently accuse his administration of being “anti-LGBT,” nearly all the examples relate to gender identity, not sexual orientation.

“Trump’s administration unveiled a proposal to rescind nondiscrimination protections for transgender people under the Affordable Care Act. Also last week, the administration finalized one rule allowing medical workers to refuse to treat trans people based on religious objections, while drafting another that would allow homeless shelters to turn away transgender individuals.”

And here are the justifications “The New Civil Rights Movement” site uses to call Trump “the most anti-LGBT president in history”: 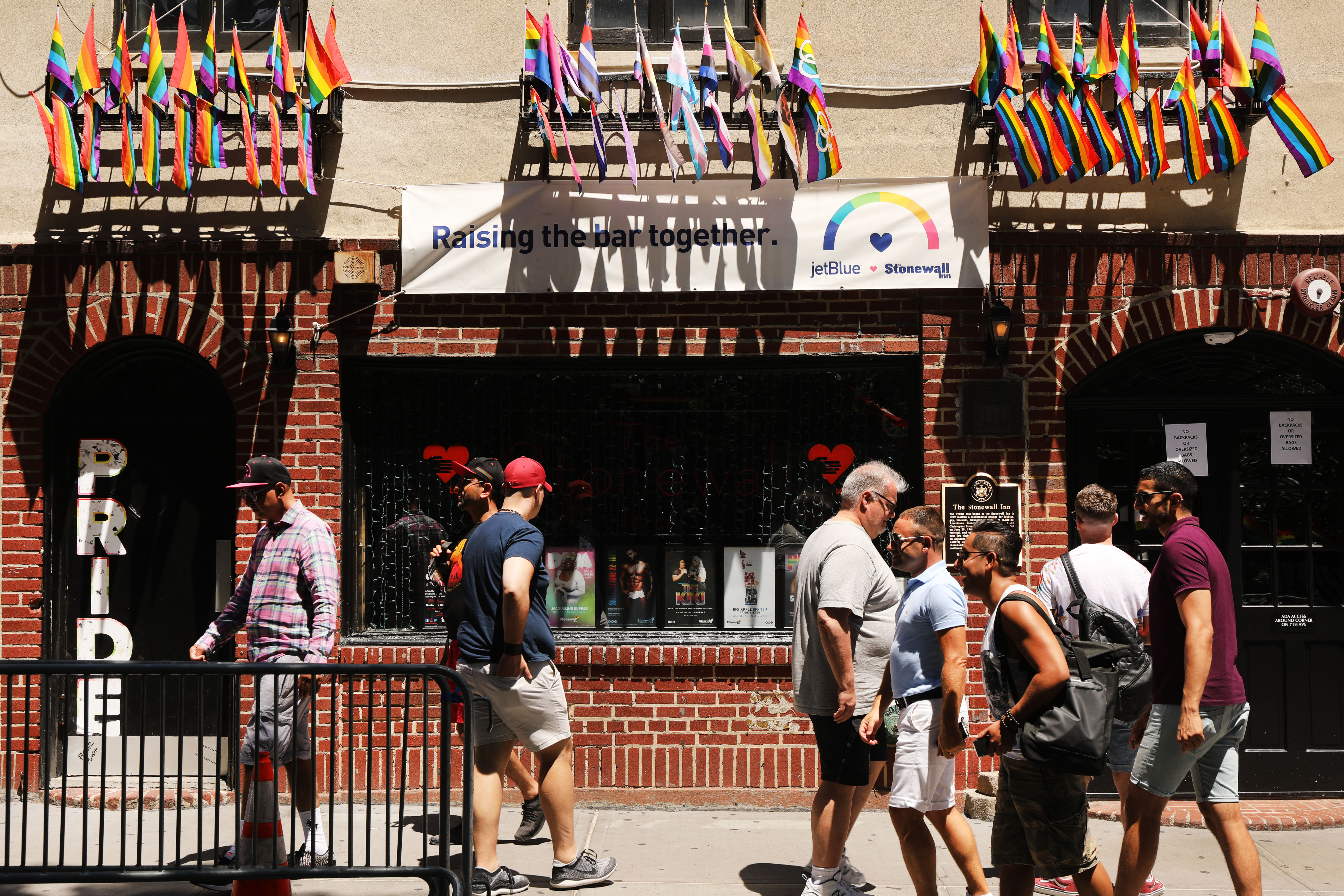 NEW YORK, NEW YORK – JUNE 26: A crowd gathers outside the Stonewall Inn as New York City celebrates Pride Month on June 26, 2019 in New York City. Thousands of members of the LGBTQ community have been gathering outside of the historic gay bar in Greenwich Village to celebrate the 50th anniversary of riots at the inn, which many people consider the birth of the modern gay rights movement in America. (Photo by Spencer Platt/Getty Images)

Those two paragraphs list seven specific rapid-fire “anti-LGBT” actions by the administration. None discriminates against gay, lesbian, and bisexual Americans

And indeed, President Trump has a mostly pro-gay record in office, and by far the best for a Republican president. He’s the first president to be inaugurated while supporting same-sex marriage, and he de-fanged the religious liberty executive order his evangelical allies desired that would have authorized discrimination against gays under guise of religion. His State Department initiative to decriminalize homosexuality worldwide is far more ambitious than anything President Obama ever did on that front. (RELATED: Trump — The Most Pro-Gay President In American History?)

Nearly all of Trump’s purported “anti-gay” actions are byproducts of other aministration goals, rather than the result of animus toward gay people. When the government recently told embassies to fly only the American flag, it meant they couldn’t fly a Pride flag. But if the rule applies to all flags but Old Glory, it’s not homophobia. Trump’s defenses of cake-bakers and adoption agencies are about religious liberty, not homosexuality. They apply across the board.

Yet the organized LGBT community has given President Trump no credit, and has even attacked him when he does what they asked for. For example, on May 30 the gay activist group GLAAD released a statement headlined “President Trump Must Honor 50th Anniversary Of Stonewall Riots, LGBTQ Movement.” One day later, Trump tweeted a recognition of Pride Month and the “outstanding contributions LGBT people have made to our great nation.” The day after that, GLAAD chief Sarah Kate Ellis attacked Trump’s statement, calling it “gaslighting.”

She did not explain why her organization two days earlier had demanded President Trump engage in gaslighting.

It is clear, though, that the Trump Administration has not pursued policies on gender identity that are as welcoming as those on sexual orientation. In doing so, the president is not alone. His caution on transgender rights parallels that of President Obama and even that of the gay community itself.

As a 2008 presidential candidate, then-Senator Obama released an “open letter” to the LGBT community with a solitary promise to transgender Americans: to protect them from workplace discrimination. He did not take a stand on any of the other controversies currently pitting President Trump against trans advocates. He did not even mention, much less call for, transgender military service.

As president, Obama took anti-trans steps that are now little-remembered, including deporting undocumented trans people to countries that are hostile to them. By contrast, in a Trump Administration well-known for rejecting would-be migrants, people claiming asylum based on gender identity now have an advantage because the country accepts they have a recognized fear of persecution.

The vast majority of President Obama’s steps welcomed by transgender advocates came in the eighth year of his presidency. His two most celebrated trans-inclusive policies – the directive over school bathroom use and the policy that transgender servicemembers could serve openly – were announced in May and June 2016, respectively.

The gay community, too, did not prioritize trans issues as recently as a dozen years ago. The clearest example is the Employment Non-Discrimination Act. In 2007, when openly gay U.S. Rep. Barney Frank (D-Mass.) realized the bill could not pass if it covered gender identity, he stripped that provision and advanced a sexual-orientation-only bill through Congress.

That decision split the gay community, with the largest gay organization (the Human Rights Campaign) defending it as a necessary step toward helping millions of gay Americans, and many other voices lambasting it for excluding a segment of it. 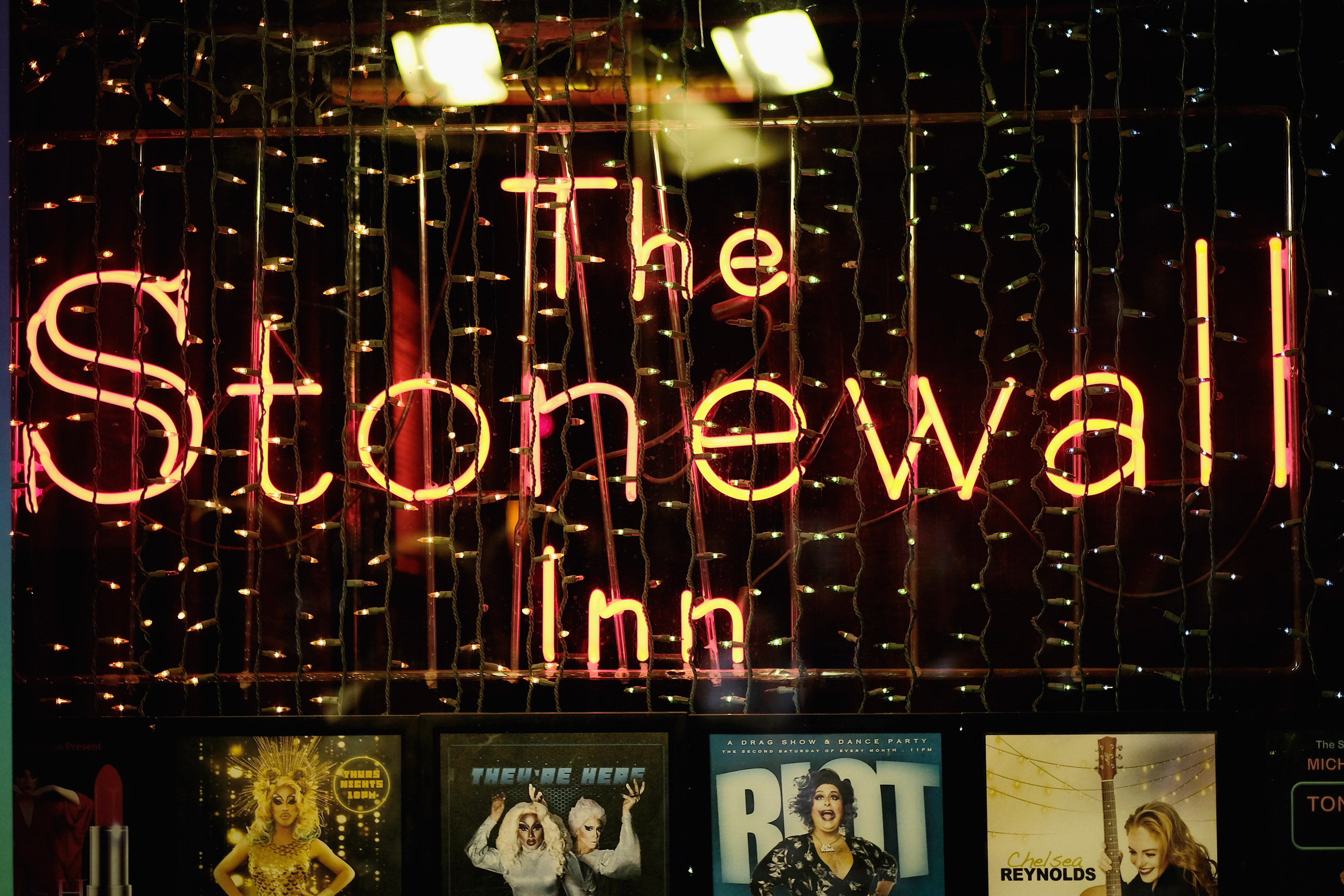 For many years before that, trans issues simply were not priorities for the gay community. When organizers of the 2000 Millennium March on Washington surveyed members of the community on the event’s platform, none of the 13 options was a specific trans issue. That event was initially planned solely by gays and lesbians, and included organizers from the trans community only after community complaints.

Similarly, in the debate over ending the “don’t ask, don’t tell” policy in the military, the gay community did not advocate for transgender service, and the trans community by and large did not ask them to. For example, Pepe N. Johnson of the Transgender American Veterans Association wrote that in trying to end the military discrimination on sexual orientation, he had several discussions with both gay and trans people and came to the conclusion “it would be inappropriate” to include gender identity in that advocacy. (RELATED: LGBT Groups And Activists Question Trump’s Backing Of Pride Month)

Just as Obama and the gay community itself did not rush headlong into embracing trans advocacy, President Trump has taken a cautious approach toward implementing government policies allowing people to live as their self-affirmed gender. On some issues like trans service in the military most of the country and even some major Republican leaders disagree with him.

But on other trans issues, the country is split or leans the other way. Slightly more than half of Americans oppose letting people use the bathroom of their choice irrespective of gender identity, and only 28 percent of Americans want biological males to be allowed to compete on girls’ athletic teams. Even fewer (23 percent) say people should have the right to list the gender of their choice on government documents without restriction.

Neither side knows how America will deal with gender identity on the 100th anniversary of Stonewall in 2069. Perhaps everyone will wear ribbons listing their pronouns and all children will be “theybies” until they choose a gender – or no gender – at an older age. But for now, President Trump’s “go slow” approach to transgender issues is, for better or worse, largely in step with the country’s Zeitgeist.