A federal appeals court ruled Wednesday that court documents in a lawsuit involving billionaire Jeffrey Epstein will be unsealed, paving the way for potentially explosive disclosures about the politically connected sex offender.

The U.S. Court of Appeals for the Second Circuit issued the decision in a lawsuit that Virginia Roberts Giuffre, a one-time masseuse for Epstein, filed against Ghislaine Maxwell, a longtime Epstein associate who has been described as a “madam” for the billionaire.

Giuffre alleged Maxwell recruited her when she was 15 to give sexual massages to Epstein at his mansion in Palm Beach. Giuffre filed a lawsuit Sept. 21, 2015, accusing Maxwell of making defamatory statements by claiming that Giuffre made false allegations about Epstein.

Nearly 170 court filings were submitted under seal in the case. A 76-page summary judgement in the case was also heavily redacted. It is unclear when the documents will be made public following Wednesday’s decision.

“[U]pon reviewing the summary judgment materials in connection with this appeal, we find that there is no countervailing privacy interest sufficient to justify their continued sealing,” the appeals court ruled. 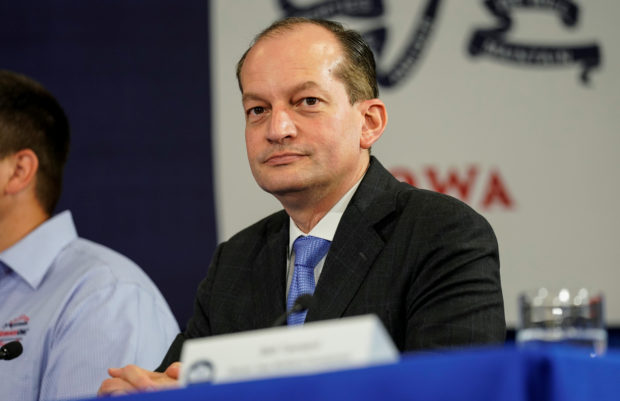 The ruling overturns a New York judge’s decision to keep the court filings under seal. The appeals court said in its 25-page decision that the judge in the New York case “erred in several respects.”

The Miami Herald, blogger Mike Cernovich and Alan Dershowitz, a friend and lawyer of Epstein’s, had sued for the lawsuit documents to be unsealed. Dershowitz, a prominent constitutional scholar, has sued Giuffre, alleging she falsely accused him of having sex with Epstein’s underage victims. (RELATED: ANN COULTER: How A Democratic Pedophile Became A Trump Scandal)

The Herald has reported extensively on Epstein’s alleged misdeeds, as well as a sweetheart deal he struck with federal prosecutors in Florida more than a decade ago. The case has for years made national headlines, largely because of Epstein’s past relationships with powerful figures, such as Bill Clinton, Prince Andrew, and Donald Trump. Clinton reportedly flew more than two dozen times on Epstein’s private jet, which has been dubbed the “Lolita Express.”

An FBI investigation of Epstein that began in 2005 identified nearly three dozen teenage girls — mostly between 13 and 16 years old — who said they were recruited to perform sex acts for Epstein and his friends, according to The Herald.

As Epstein was set to face a lifetime in prison, he struck a deal June 30, 2008, with the U.S. Attorney’s Office in southern Florida, which was led at the time by Alexander Acosta, the current secretary of labor.

Epstein, who made his fortune in finance, served only 13 months in a state work camp and received immunity from federal prosecution as part of the plea agreement. He was required to register as a sex offender.

The lenient deal for Epstein has led to calls for an investigation of Acosta’s decision. Some of Epstein’s victims have also called for terms of his plea bargain to be revoked.

“We applaud the Second Circuit’s decision to unseal the materials in the Giuffre v. Maxwell case,” Sigrid McCawley told The Daily Beast in a statement.

“This ruling is a watershed moment that helps victims of sexual abuse. It unequivocally stands for the proposition that information cannot be hidden in court filings and that the public has the right to know about the abuse of victims.”