Vice President Mike Pence and Second Lady Karen Pence visited Chabad of Poway, the San Diego, California synagogue that was the site of an anti-Semitic shooting, on Thursday.

Three people were wounded and one woman was killed in the shooting that took place at the synagogue in late April 2019.

Rabbi Yisroel Goldstein embraced Pence as he entered Poway’s lobby, according to a White House pool report. Goldstein’s hands were still wrapped with a blue bandage, covering the injuries he received from the gunman. 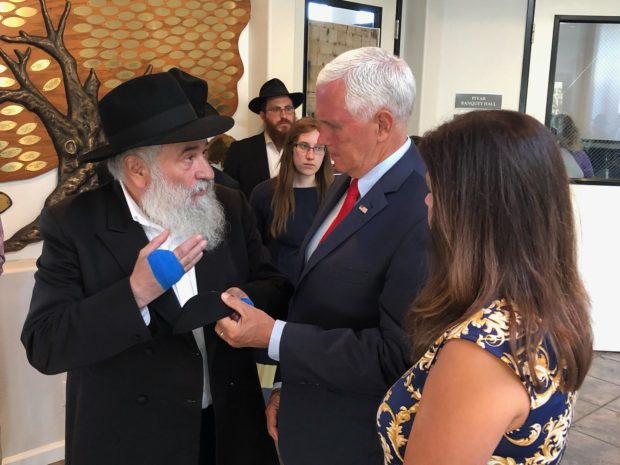 “We had to come,” Pence told Goldstein.

Goldstein walked Pence through the attack, pointing out where he stared down the shooter’s assault rifle, retracing the shooter’s footsteps, and showing how people fled.

“I was looking down the barrel of a rifle, right here in my home,” Goldstein said. “I heard children playing behind me.”

“As he shot and tried to kill me, he got my fingers,” he stated.

Also present during the unannounced visit was Oscar Stewart, the combat veteran who is credited with helping to chase the shooter away after his gun jammed.

“I knew I had to be within five feet of this guy so his rifle couldn’t get to me,” Stewart told the Daily Caller after the attack. “So I ran immediately toward him, and I yelled as loud as I could. And he was scared. I scared the hell out of him.”

Stewart told Pence on Thursday that he remembered the muzzle flashes from the shooter’s gun.

“That darkness was pushed out of here,” Goldstein said. “God was really protecting us.”

Goldstein ushered press and the Pence family into the sanctuary, where he prayed for the Pences, thanked President Donald Trump for inviting him to the White House back in May and applauded the administration’s support for the Jewish community. (RELATED: San Diego Synagogue Rabbi Applauds Trump: ‘You Heal People In Their Worst Of Times’) 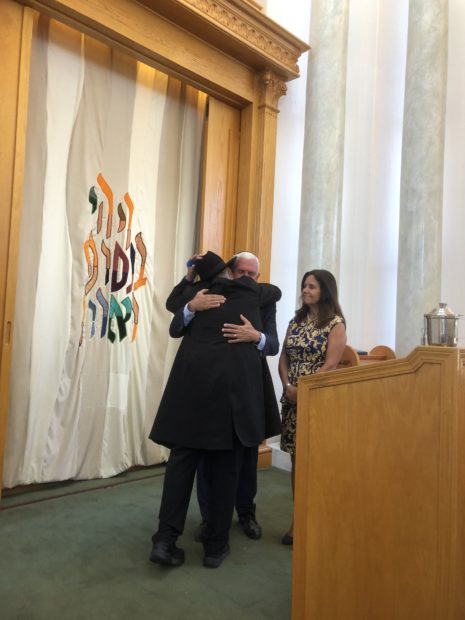 “We prayed together. It gave me such comfort. It began our healing,” Goldstein recalled. “You built a bridge from the White House to our house. This is why the Jewish people feel so at home in America.”

The rabbi added that he “loves” the president.