“What a weak argument, because you can’t get your way and because you’re getting pushback you resort to using the race card?” Clay said, according to The Hill. “Unbelievable. That’s unbelievable to me. I could care less. I could really care less. I agree with the Speaker. Four people, four votes out of 240 people, who cares.”

The New York congresswoman told The Washington Post on Wednesday that Pelosi has been “disrespectful” toward “newly elected women of color” in Congress, adding a racial tinge to the long-running tension between the old guard and the more progressive House Democrats. Previously, Pelosi had referred to the House left-wing as “four people,” sparking a tense rebuttal from Ocasio-Cortez on social media. 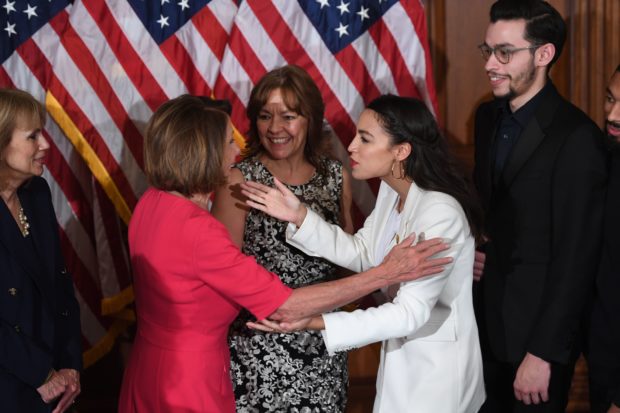 Speaker of the House Nancy Pelosi (L) greets Rep. Alexandria Ocasio-Cortez (R), D-NY, during the ceremonial swearing-in at the start of the 116th Congress at the US Capitol in Washington, DC, January 3, 2019. (Photo by SAUL LOEB / AFP / GETTY)

“It shows you how weak their argument is when they have to resort and direct racist accusations toward Speaker Pelosi … it’s very disappointing to me,” said Clay, according to The Hill.

The Missouri Democrat also had harsh words for Chakrabarti and the Justice Democrats, which unsuccessfully tried to primary him in 2018 and have already endorsed a primary challenger for the 2020 race. (RELATED: I’m A Conservative, And I Went To An Alexandria Ocasio-Cortez Rally)

“It shows you how ignorant and little history [Chakrabarti] knows, how ignorant he is to American history. How dare he,” he said before turning his attention to Justice Democrats: “They’re missing the fact that we have a very thin margin of a majority that we’re operating under and apparently it doesn’t matter to Justice Democrats, they just want to get skins. They want to score points for whatever reason. But I find it juvenile, their tactics, I find their ignorance to be beyond belief about American history and about who are really segregationists. And so how dare they try to play the race card at this point, it shows you the weakness of their arguments.”

Clay’s ire could be well earned. Beyond just the Justice Democrats’ endorsement of his primary opponent in 2018, Ocasio-Cortez herself campaigned in the Missouri Congressman’s district for his 2018 Democratic primary opponent, Cori Bush.