President Donald Trump accused four progressive congresswomen of hating the U.S. and even supporting  al-Qaida in a tweetstorm that coincided with their Monday afternoon presser responding to his “why don’t they go back” remarks.

“We will never be a Socialist or Communist Country. IF YOU ARE NOT HAPPY HERE, YOU CAN LEAVE! It is your choice, and your choice alone. This is about love for America. Certain people HATE our Country… They are anti-Israel, pro Al-Qaeda, and comment on the 9/11 attack, ‘some people did something.’ Radical Left Democrats want Open Borders, which means drugs, crime, human trafficking, and much more,” Trump wrote Monday on Twitter.

“Detention facilities are not Concentration Camps! America has never been stronger than it is now – rebuilt Military, highest Stock Market EVER, lowest unemployment and more people working than ever before. Keep America Great!” Trump continued. (RELATED: Trump Doubles Down Amid Criticism From Left And Right For ‘Why Don’t They Go Back’ Tweet)

The president had already accused the congresswomen of hating the U.S. and supporting terrorists at a White House event Monday, reported NBC News.

Trump has faced continued backlash from voices on the left and the right since his Sunday tweets saying that “Nancy Pelosi would be very happy to quickly work out free travel arrangements” for four progressive congresswomen (one of whom is an immigrant). Democratic Reps. Alexandria Ocasio-Cortez of New York, Ayanna Pressley of Massachusetts, Rashida Tlaib of Michigan and Ilhan Omar of Minnesota held a presser on Capitol Hill to share their reactions. 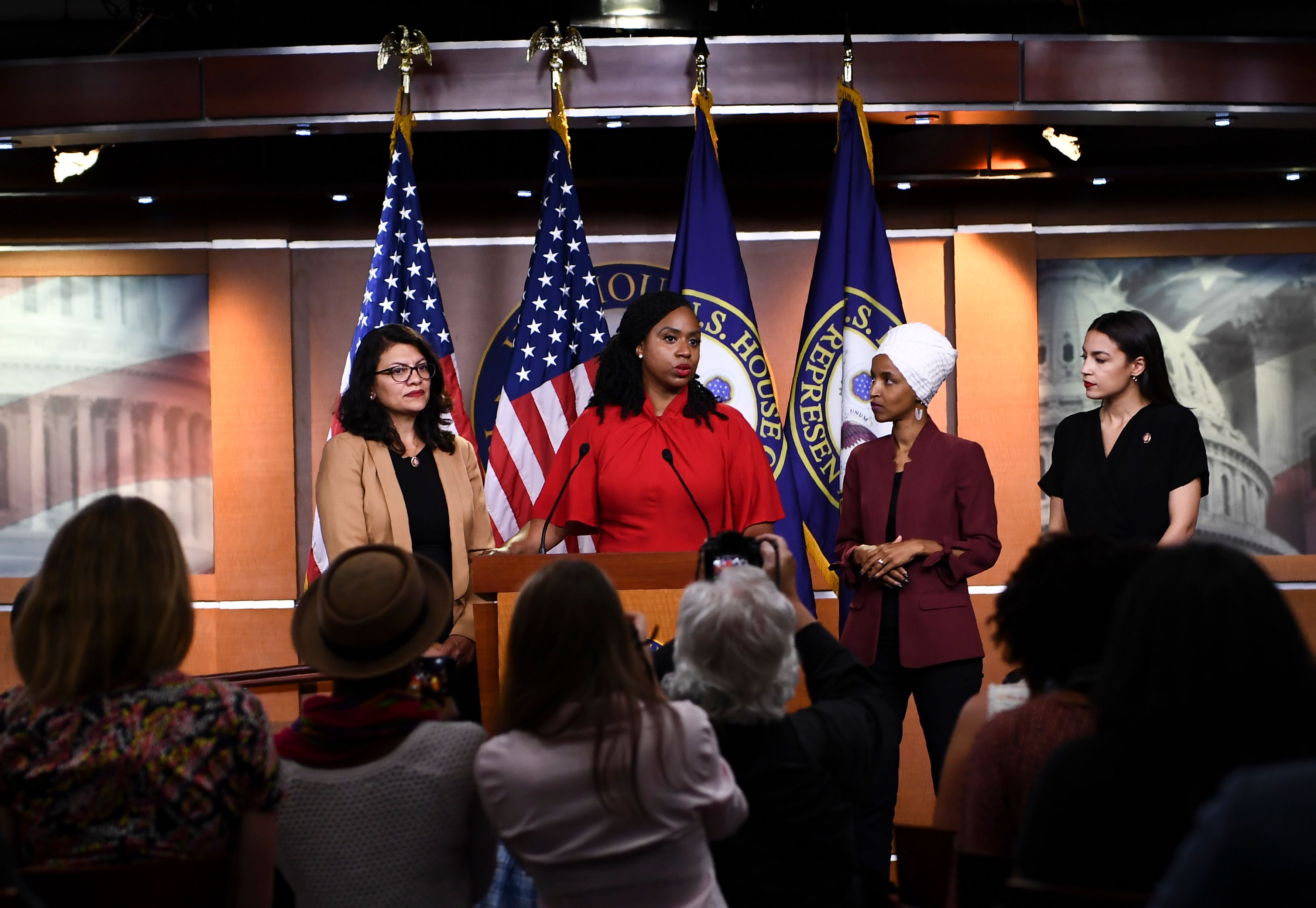 US Representatives Ayanna Pressley speaks as, Ilhan Omar, Rashida Tlaib, and Alexandria Ocasio-Cortez look on during a press conference, to address remarks made by US President Donald Trump earlier in the day, at the US Capitol in Washington, DC on July 15, 2019.(BRENDAN SMIALOWSKI/AFP/Getty Images)

Omar came under fire in April for her characterization of 9/11 as “some people did something.”

She accused Trump of “stoking white nationalism” for his Sunday tweetstorm.

“Mr. President, As Members of Congress, the only country we swear an oath to is the United States. Which is why we are fighting to protect it from the worst, most corrupt and inept president we have ever seen,” she wrote Sunday on Twitter.

“You are stoking white nationalism bc you are angry that people like us are serving in Congress and fighting against your hate-filled agenda,” Omar continued.

“So interesting to see ‘Progressive’ Democrat Congresswomen, who originally came from countries whose governments are a complete and total catastrophe, the worst, most corrupt and inept anywhere in the world (if they even have a functioning government at all), now loudly and viciously telling the people of the United States, the greatest and most powerful Nation on earth, how our government is to be run. Why don’t they go back and help fix the totally broken and crime infested places from which they came,” Trump wrote Sunday on Twitter.