Jessica Yaniv, a transgender Canadian woman, has filed over a dozen gender-identity discrimination complaints against women in the Vancouver area who have refused to perform Brazilian bikini wax procedures on her male genitalia.

Yaniv’s identity was revealed Wednesday after the British Columbia Human Rights Tribunal overturned an order protecting Yaniv’s identity from being disclosed by the Canadian press. However, Yaniv’s identity has long been suspected by the public, according to John Carpay, President of the Justice Centre for Constitutional Freedoms, which is representing five women Yaniv has filed complaints against.

Carpay says the women Yaniv has filed complaints against are mostly poor immigrant women who speak English as a second language. He believes multiple women have likely been forced to shut down their businesses as a result of Yaniv’s complaints, as he told the Daily Caller. In the hearing Wednesday, Maria Da Silva, an immigrant from Brazil with young children, testified that Yaniv’s complaint forced her to close the Brazilian wax business she operated out of her home.

The women who refused Yaniv the procedure say they are not qualified to perform a Brazilian wax service on male genitalia, as it is entirely different from the service intended for women. An esthetician who does perform Brazilian waxes on men testified at an earlier hearing that this service requires completely different expertise.

The Human Rights Tribunal has not announced their decision on the cases, and will not do so until a few weeks or months have passed, according to Carpay.

Besides being unqualified for the procedure, Carpay says the women facing complaints have religious and safety reasons for denying Yaniv the service. Esthetician Sukhi Hehar Gill, a practicing Sikh, says she denied Yaniv’s request for the procedure because it is contrary to her faith to travel to a client’s house if they are biologically male, according to the Justice Centre.

Yaniv posted a tweet Thursday arguing the refusal of women to wax her genitalia is “about businesses and individuals using their religion and culture to refuse service to protected groups.”

This is not about waxing. This is about businesses and individuals using their religion and culture to refuse service to protected groups because -they- don’t agree with it or the person and use that to illegally discriminate contrary to the BC Human Rights Code and the CHRC. https://t.co/34XIklXXbh

It is “certainly very traumatic” for these women to go before the Human Rights Tribunal, said Carpay.

“Some of my clients have been very significantly affected on a personal level. [Another client also] closed her business, she has been depressed, anxious, sleepless and that has gone on for a period of many many months,” said Justice Centre lawyer Jay Cameron, according to the Post Millennial.

Even if the women are successful in defending themselves against the allegations of discrimination in violation of section eight of the British Columbia Human Rights Code, the complaint could cost them $10,000, $20,000 or even $30,000 in legal fees, said Carpay. He also believes some women have already paid Yaniv thousands of dollars in settlement money to avoid going to court. The Justice Centre is providing representation to the women free of charge.

The Justice Centre testified in the hearing that Yaniv has a history of withdrawing complaints against estheticians when a woman has legal representation. According to Carpay, the tribunal said they found this pattern “disconcerting.”

Derogatory comments Yaniv has made towards people of Indian ancestry were introduced in the proceedings as part of assessing Yaniv’s credibility as a witness, given that the accused estheticians are immigrants, said Carpay. Yaniv called people of Indian ancestry “curry shoving crapheads,” among other negative statements towards immigrants. The tribunal said it is “troubled that some of Yaniv’s comments, made within this process and online,” suggest that Yaniv “holds stereotypical and negative views about immigrants to Canada,” according to the Justice Centre.

In addition, comments Yaniv has made regarding girls and tampons and girls in locker rooms were introduced in the hearing to assess Yaniv’s credibility as a witness, according to Carpay. Dozens of texts by “Jonathan Yaniv,” which are publicly online, show Yaniv discussing girls as young as 10 to 12 in extremely disturbing terms.

“if I notice a girl that’s nude below and has a tampon string coming out when I’m changing and doing my stuff, is it weird to approach her to ask her for a tampon? or pad? Just to bond with her a bit over period stuff…. I really want to make friends in there, that’s kinda a goal of mine,” Yaniv said.

“If there’s like 30 girls in the change room, how many of them would you say are out there changing freely with their vaginas and tits out?” Jessica Yaniv said under the name “Jonathan Yaniv.”

When a Twitter user asked Yaniv: “Have you asked any young girls if they want help inserting their tampon recently?”, Yaniv responded that she had not ever done so.

Yaniv also faces accusations of online predatory behavior towards underage girls, but this was not introduced in court proceedings.

“I tracked down and heard witnesses with first-person accounts of Jessica’s online behaviour spanning 2013 to 2018,” Oger said. “Their stories included reports and evidence of outrageously inappropriate acts, some towards children who are tweens and teens. Some of the material has survived as screenshots, and what I saw shows what strikes me as a pattern of predatory behaviour.”

Oger says she “urged each woman to make a complaint with police,” about Jessica Yaniv’s alleged behavior towards them.

As a transgender woman herself, Oger was careful to stress her belief that Yaniv’s behavior is entirely separate from her transgender identity, and to condemn those who echoed the allegations in a way that was “steeped in transphobia.” Oger noted the allegations against Yaniv have not been proven or ruled on by a court.

Oger says Yaniv told her the allegedly predatorial statements were taken out of context. Oger added that to her knowledge, Yaniv has never come publicly clean about this behavior.

Twitter screenshots show Yaniv asking women or girls (their age is unknown) how old they are in 2011. 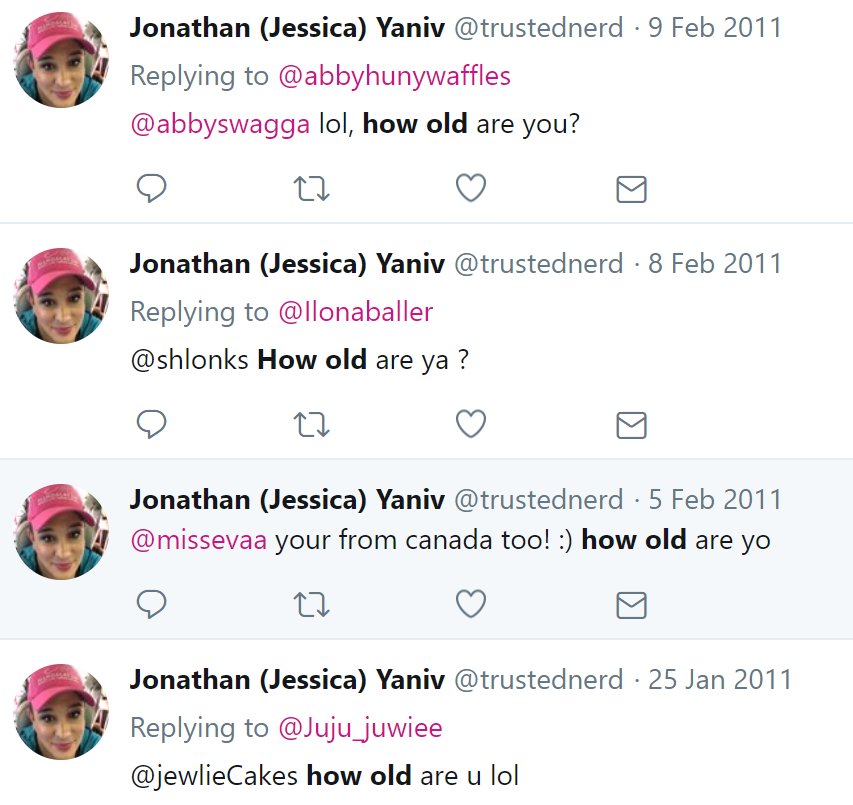 Jessica Yaniv, under the name Jonathan Yaniv, asked women or girls their age over Twitter in 2011. (Screenshot/Twitter/@trustednerd)

Multiple women, including Meghan Murphy, Canadian journalist and founder of Feminist Current, and Lindsay Shepherd, Canadian columnist and free speech advocate, have been banned from Twitter because of their statements towards Jessica Yaniv.

Meghan Murphy tweeted: “Is it true that the man responsible for trying to extort money from estheticians who refused to give him a Brazilian bikini wax is @trustednerd [Jessica Yaniv]? Why the f*** is the court/media protecting this guy’s identity either way? The women he targeted don’t get that luxury.”

Murphy was banned from Twitter after she tweeted in response to her earlier question: “Yeah it’s him,” which was classified as “hate speech.” Twitter has a policy against intentionally misgendering people. Murphy had previously been suspended for statements that called transgender women “men.” (Related: Feminist Banned By Twitter Fires Back With Lawsuit)

Carpay expressed confidence in the arguments the estheticians made. “We believe the women have strong grounds for having refused the request,” he told the Daily Caller. “We think we have a strong argument.”