The New York Post editorial board called for a ban on assault weapons Sunday after two shootings claimed 29 lives over the weekend.

The Post, owned by Rupert Murdoch’s News Corporation, which also owns Fox News, asked President Donald Trump to bring back an assault weapons ban, according to an editorial.

“People all across the nation are scared; many feel like the country is spinning out of control,” the editorial board wrote. “President Trump, you are positioned to assuage that fear. Come up with answers. Now. Beginning with the return of an assault weapons ban.” 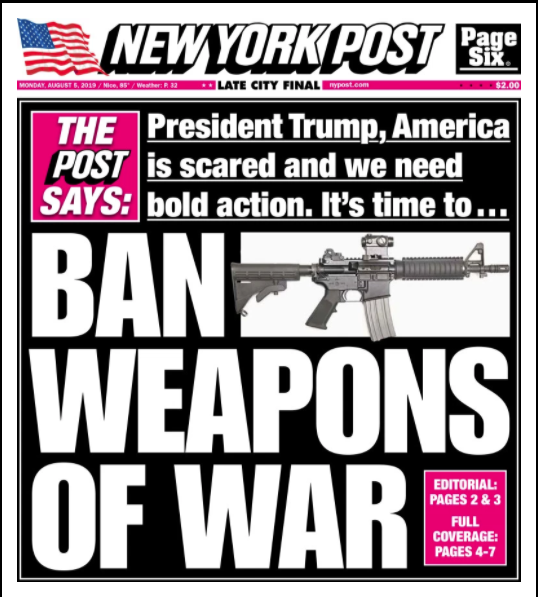 The Post, a publication some view as right-leaning, said the ban, which was in place from 1994 until 2004, had “a limited impact” and the label “assault weapons” may not accurately describe a clear class of guns.

The Post board recommended the next ban might be more effective if written clearly with a focus on mechanical functions like muzzle velocity and rate of fire instead of cosmetic design.

Trump has not yet mentioned a ban on assault rifles, however, he has called for a number of gun control measures since the shooting.

We cannot let those killed in El Paso, Texas, and Dayton, Ohio, die in vain. Likewise for those so seriously wounded. We can never forget them, and those many who came before them. Republicans and Democrats must come together and get strong background checks, perhaps marrying….

He addressed the nation later Monday morning and asked that lawmakers consider a number of solutions including “red flag” early warning protection laws, which would facilitate the confiscation of weapons if someone has been deemed dangerous.

“Our Founding Fathers gave us the right to bear arms in a time of muskets,” the Post editorial continued.

“They did not foresee a time when one 21-year-old could kill 20 people in the span of minutes thanks to poisonous beliefs and an assault weapon,” it added.