CNN’s Brian Stelter should have shut up about his coworker Oliver Darcy‘s birthday.

Or maybe just be old-fashioned and give him a f*cking balloon or a cute box of cupcakes? (RELATED: Tucker Carlson Sends Brian Stelter A Box Of Jelly Donuts)

Stelter is on paternity leave after his wife recently gave birth to the couple’s second child, Story Moon, little bro to Sunny. But he can’t help himself and tweeting in his jam. So he’s still online, and incessantly on Twitter, and regularly mentioned in his nightly newsletter, which Darcy is writing until Stelter formally returns. (“Brian says hi,” Darcy wrote in one of his recent substitute newsletters. REALLY? Do we REALLY have to be subjected to this?)

In the land of social media, a birthday can be both a blessing and a bitch.

And in a world that partially caters to President Donald Trump, who adamantly despises CNN, a birthday can be especially cruel.

So really, Stelter, can’t you just be on paternity leave and not put Darcy in a world of hell on his birthday?

Darcy knew his feed would explode with hate.

“This means my mentions will be an oasis of positive messages for the next 24 hours, right?” he asked Stelter in response to his poorly thought out birthday wishes.

SO WHY DO THIS TO THE POOR GUY?

I get it. Stelter likes Darcy. Maybe even loves him in a coworker sort of way.

My hypothesis: Because unfortunately for Darcy, Stelter loves Twitter more.

You know how I know this? Because on Tuesday, Stelter took time out of his paternity leave to tweet about breakfast cereal. “You know what’s underrated?” Stelter asked Tuesday around lunchtime. “Crispix.”

You know what’s overrated, Stelter, not to mention stupid? Wishing people a happy birthday on Twitter.

Monday night’s @ReliableSources, produced by @OliverDarcy, is out. It’s his birthday in a few minutes so wish him a happy b’day! https://t.co/04KYcetdI4

Darcy replied, “This means my mentions will be an oasis of positive messages for the next 24 hours, right?”

Darcy was soon told to “eat shit” and called an “asshole.” 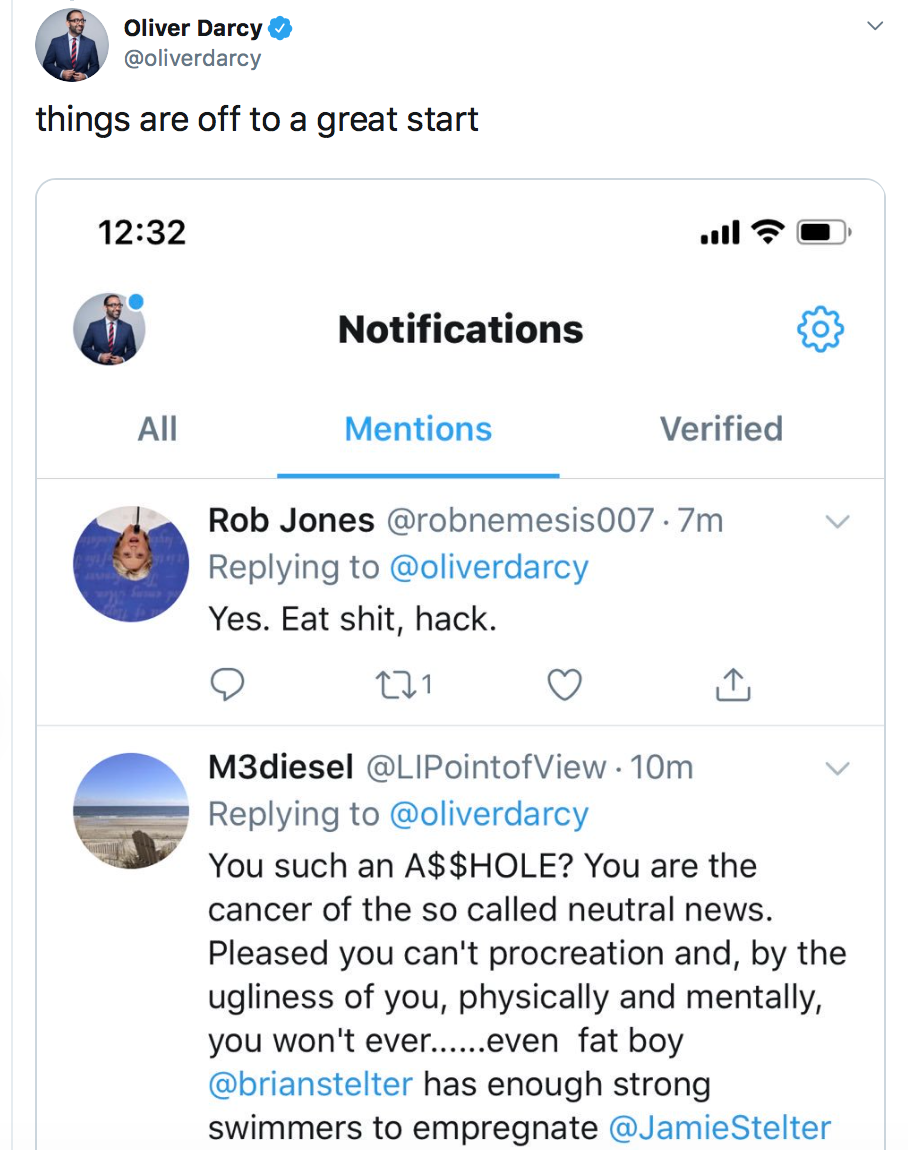 The Mirror sought comment from Darcy. He had no immediate response.

By the way, before I forget, Happy Birthday Darcy!